Did Teeth Evolve from Fish Scales?

In biology, one long-running debate has teeth: whether ancient fish scales moved into the mouth with the origin of jaws, or if the tooth had its own evolutionary inception.

Recent studies on species such as zebrafish showed scales and teeth developing from distinctly different clusters of cells in fish embryos, pouring cold water on 'teeth from scales' theories.

However, while most fish in the sea have bones, one ancient lineage - sharks, skates and rays - possess skeletons made entirely of cartilage.

A high-magnification image of the skin of a shark, showing a broad covering of dermal denticles. 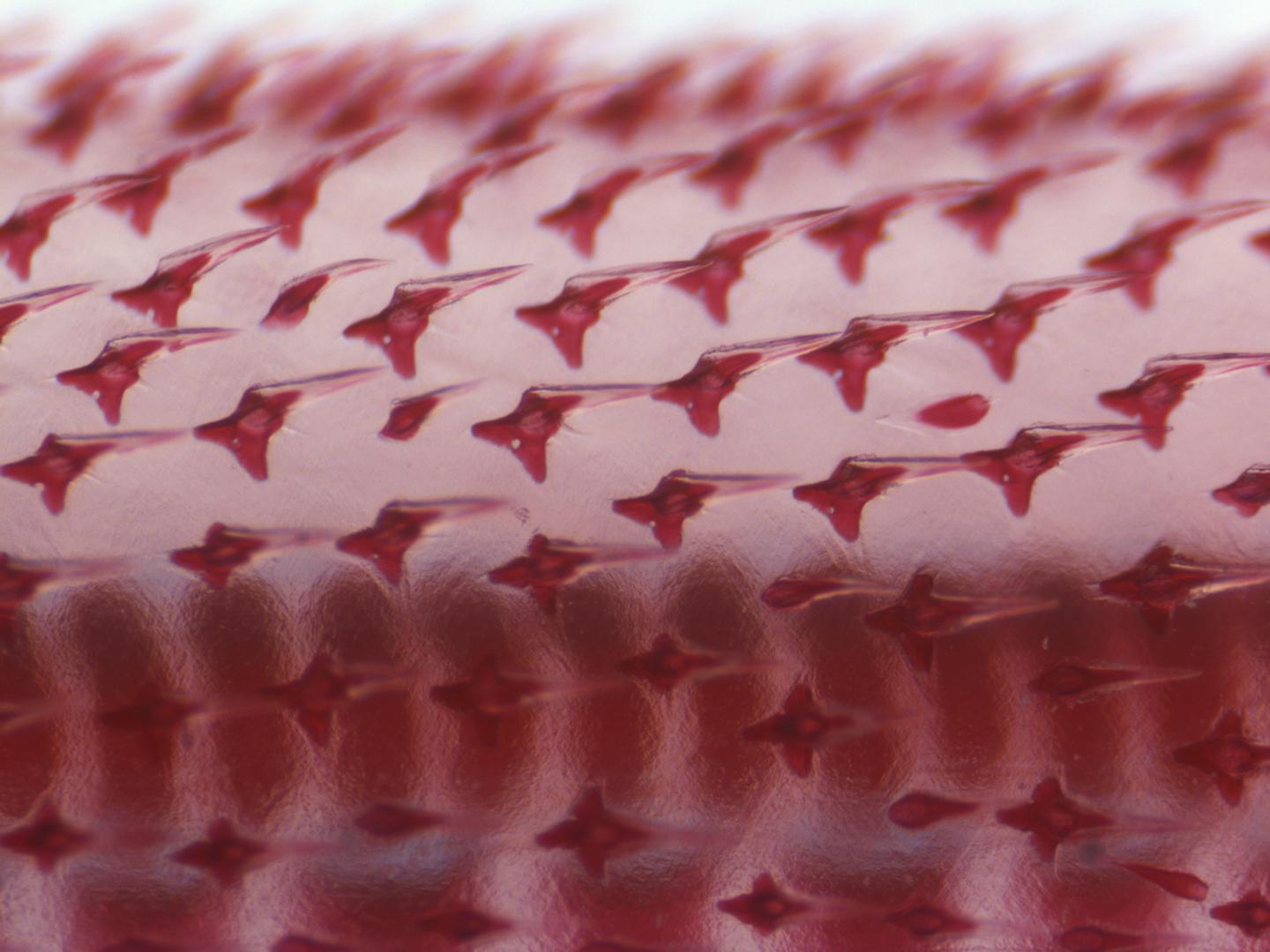 These cartilaginous fish retain some primitive characteristics that have been lost in their bony counterparts, including small spiky scales embedded in their skin called 'dermal denticles' that bear a striking resemblance to jagged teeth.

Now, researchers at the University of Cambridge have used fluorescent markers to track cell development in the embryo of a cartilaginous fish - a little skate in this case - and found that these thorny scales are in fact created from the same type of cells as teeth: neural crest cells.

The findings, published in the journal PNAS, support the theory that, in the depths of early evolution, these 'denticle' scales were carried into the emerging mouths of jawed vertebrates to form teeth. Jawed vertebrates now make up 99% of all living vertebrates, from fish to mammals.

"The scales of most fish that live today are very different from the ancient scales of early vertebrates," says study author Dr Andrew Gillis from Cambridge's Department of Zoology and the Marine Biological Laboratory in Woods Hole.

Image of a row of jagged, tooth-like denticles running down the length of the skate trunk and tail. The denticles are the tooth-like organs arranged in a line above the vertebral column. 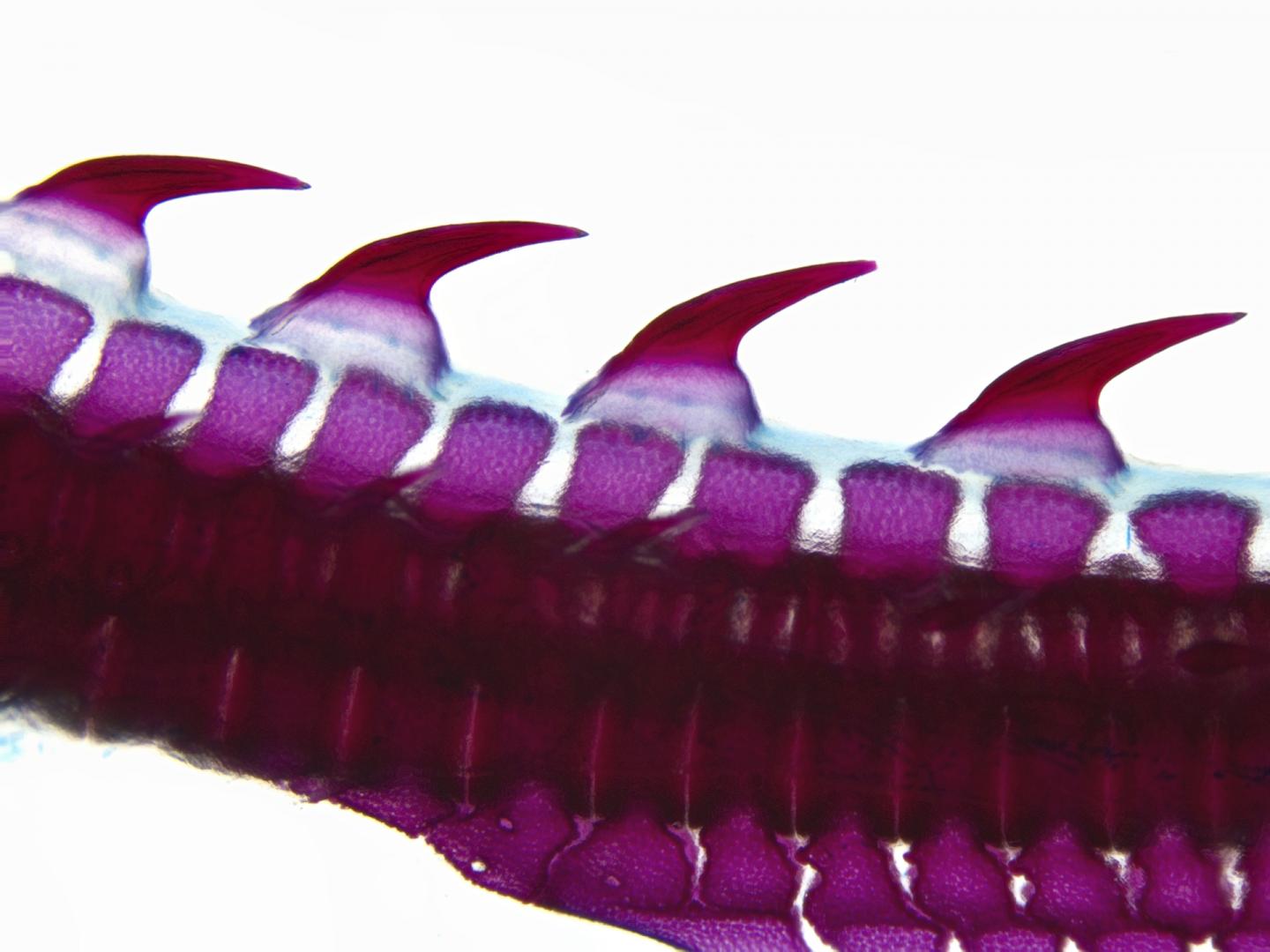 "Primitive scales were much more tooth-like in structure, but have been retained in only a few living lineages, including that of cartilaginous fishes such as skates and sharks.

"Stroke a shark and you'll find it feels rougher than other fish, as shark skin is covered entirely in dermal denticles. There's evidence that shark skin was actually used as sandpaper as early as the Bronze Age," says Gillis.

"By labelling the different types of cells in the embryos of skate, we were able to trace their fates. We show that, unlike most fish, the denticle scales of sharks and skate develop from neural crest cells, just like teeth.

"Neural crest cells are central to the process of tooth development in mammals. Our findings suggest a deep evolutionary relationship between these primitive fish scales and the teeth of vertebrates.

"Early jawless vertebrates were filter feeders - sucking in small prey items from the water. It was the advent of both jaws and teeth that allowed vertebrates to begin processing larger and more complex prey."

The very name of these scales, dermal denticles, alludes to the fact that they are formed of dentine: a hard calcified tissue that makes up the majority of a tooth, sitting underneath the enamel.

The jagged dermal denticles on sharks and skate - and, quite possibly, vertebrate teeth - are remnants of the earliest mineralised skeleton of vertebrates: superficial armour plating.

This armour would have perhaps peaked some 400 million years ago in now-extinct jawless vertebrate species, as protection against predation by ferocious sea scorpions, or even their early jawed kin.

The Cambridge scientists hypothesise that these early armour plates were multi-layered: consisting of a foundation of bone and an outer layer of dentine - with the different layers deriving from different types of cells in unborn embryos.

An image of a single dermal denticle (tooth-like scale) from a skate hatchling. The mineralised denticle is stained red, and the underlying cartilage is stained blue. 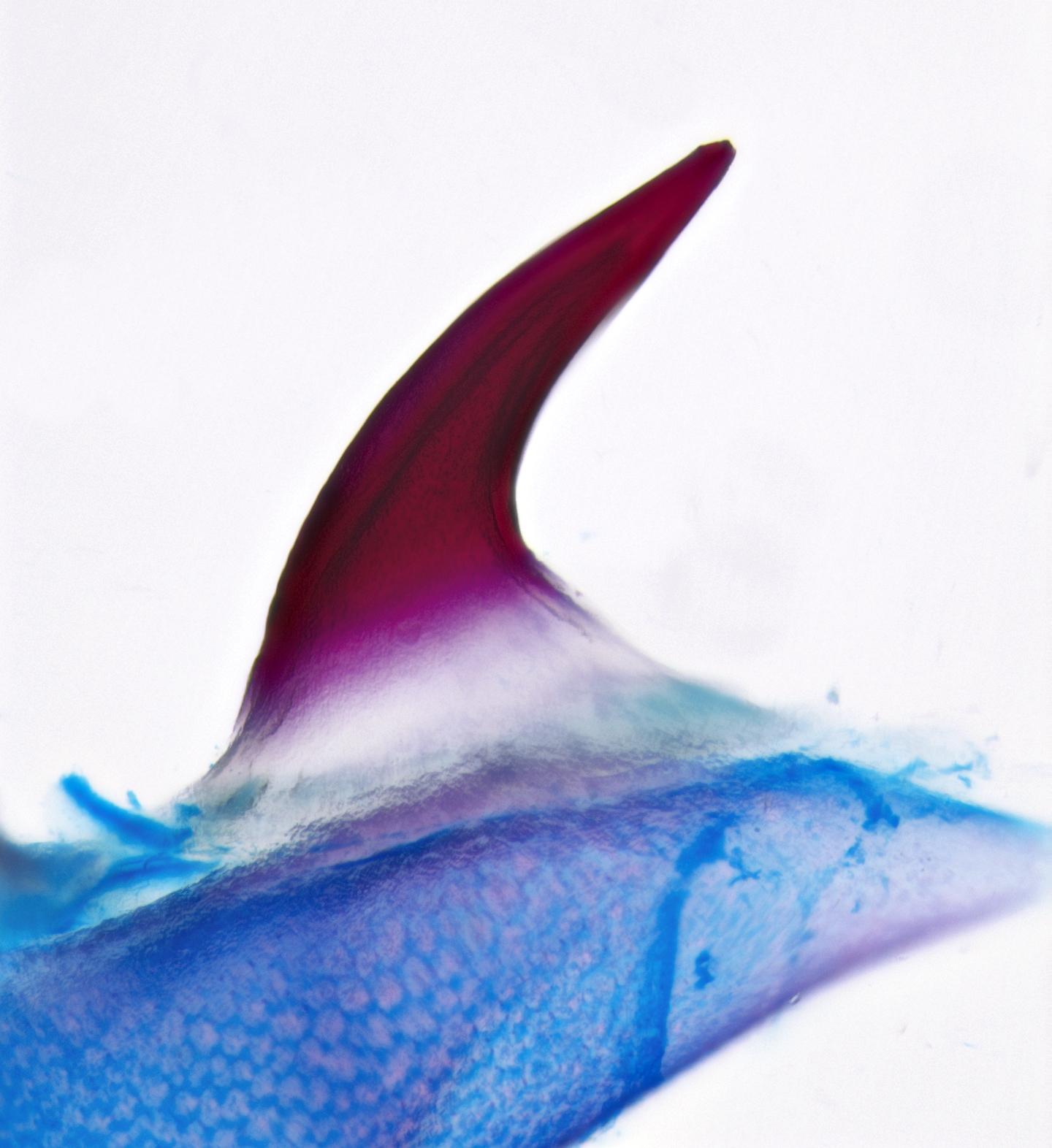 These layers were then variously retained, reduced or lost in different vertebrate linages over the course of evolution. "This ancient dermal skeleton has undergone considerable reductions and modifications through time," says Gillis.

"The sharks and skate have lost the bony under-layer, while most fish have lost the tooth-like dentine outer layer. A few species, such as the bichir, a popular fish in home aquariums, have retained aspects of both layers of this ancient external skeleton."