Astrophysicists from Lomonosov Moscow State University (MSU) and his colleagues from Italy and Russian Academy of Sciences have found the first observational evidence for a contracting white dwarf. Constant high spin-up rate of a star of this type, located in an enigmatic binary system, can be easily explained if the white dwarf is contracting, the researchers argue. The discovery is reported in the Monthly Notices of the Royal Astronomical Society.

"Thanks to this discovery, astrophysicists will be able to study and evaluate the evolution patterns of young white dwarfs -- and successfully look for similar systems in the galaxy, " -- noted the main author of the article, astrophysicist Sergei Popov (SAI MSU). 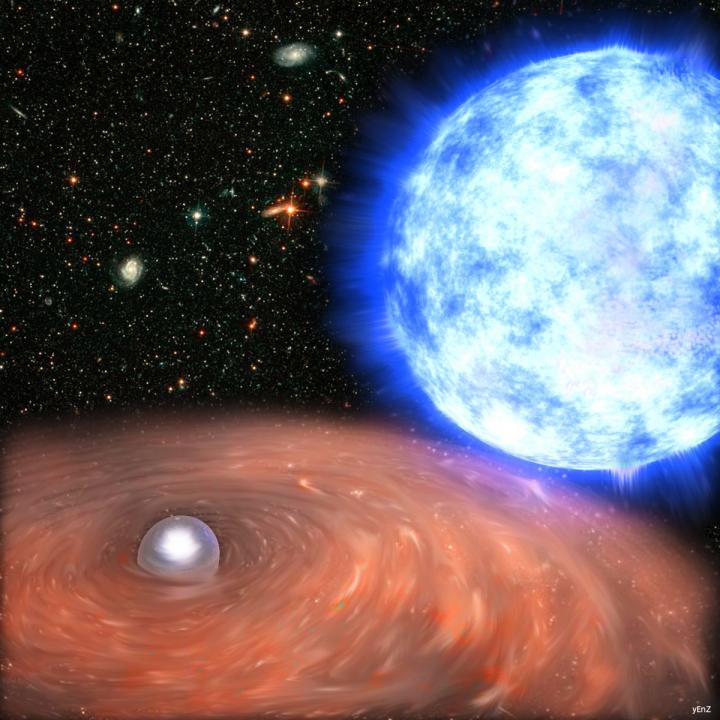 It is widely believed, based on theoretical considerations, that young white dwarfs -- the compact remnants of solar-like stars, -- should experience a phase of contraction in their early life. The radius of a typical white dwarf can decrease by several hundred kilometers during the first million years of its life. However, there was no observational evidence for this effect up to now. First, because most of the known white dwarf are much older. Second, because the scientists do not have a direct and precise way to measure the radii, and their variations, in these stars.

Studying an enigmatic X-ray source in a binary system of a rare type, the scientists might have found the first observational evidence for a contracting white dwarf. The binary system HD49798/RX J0648.0-4418 is at a distance of 2000 light years, in the Puppis constellation, and has been extensively studied with optical, UV, and X-ray telescopes. It contains a massive white dwarf, which spins with a period of only 13 s, the fastest known for a white dwarf, and emits X-rays due to the accretion of matter captured from the stellar wind of its companion star.

Sandro Mereghetti (a coauthor of the new paper) recently discovered that the rotational velocity of this white dwarf has been steadily increasing during the latest 20 years. Its spin period of 13 s is decreasing by 7 nanoseconds every year. This might seem a very small change, but it is actually a very large effect for a body weighting more than our Sun, but with a radius as small as about 5000 km (less than the Earth). Indeed, such a large spin-up rate could not be easily explained in standard ways (e.g. by the captured angular momentum of the accreting matter).

The solution to this puzzle has been now presented by the authors of this new study. They demonstrate that the high spin-up rate can be easily explained if the white dwarf is contracting, exactly as in the case of a spinning skater that brings in her arms to rotate faster. The evolutionary calculations presented in the paper show that the white dwarf has an age of only about 2 million years. The contraction rate of about one centimeter per year expected for this age is exactly of the correct amount to explain the measured spin-up rate, showing that this is the first example of contracting white dwarf ever identified.

"For decades it has been theoretically clear that that young white dwarfs are contracting. Yet, that very phase of contraction has never been observed "in real time". We should thank the uniqueness of the binary system under study: the white dwarf was literally illuminated (due to the accretion of matter from the neighboring star). But it was highlighted so neatly that the accreting matter did not affect its rotation -- an extremely rare phenomenon! In other similar systems, accretion is much more powerful: it determines how the white dwarf rotates, which makes it impossible to notice the beauty of contraction", - Popov explained.