Your Stools Reveal Whether You Can Lose Weight

Something as simple as a feces sample reveals whether you can lose weight by following dietary recommendations characterized by a high content of fruit, vegetables, fibers and whole grains. This is a finding of a new study conducted at the Department of Nutrition, Exercise and Sports at the University of Copenhagen, Denmark.

The bacteria we all have in our gut may play a decisive role in personalized nutrition and the development of obesity. This is shown by several studies that have delved into the significance of these bacteria.

"Human intestinal bacteria have been linked to the increasing prevalence of overweight and obesity, and scientists have started to investigate whether the intestinal bacteria can play a role in the treatment of overweight. But it is only now that we have a breakthrough demonstrating that certain bacterial species play a decisive role in weight regulation and weight loss" says Professor Arne Astrup, Head of the Department of Nutrition, Exercise and Sports at the University of Copenhagen, Denmark.

The subjects picked up their food in a scientific supermarket at the University of Copenhagen. 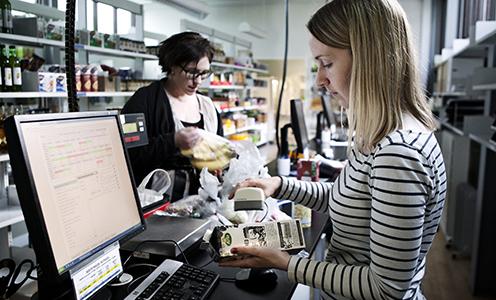 The ratio between the two groups of intestinal bacteria is crucial

A relationship between two groups of intestinal bacteria is decisive for whether overweight people lose weight on a diet that follows the Danish national dietary recommendations and contains a lot of fruit, vegetables, fiber and whole grains. In the study 31 subjects ate the New Nordic Diet for 26 weeks and lost an average of 3.5 kg, whereas the 23 subjects eating an Average Danish Diet lost an average of 1.7 kg. Thus weight loss was on average 1.8 kilos greater in the subjects on the New Nordic Diet.

The effect of changing the diet from an Average Danish Diet to the New Nordic Diet for people with a low level/high level of Prevotella-bacteria in relation to Bacteroides-bacteria. 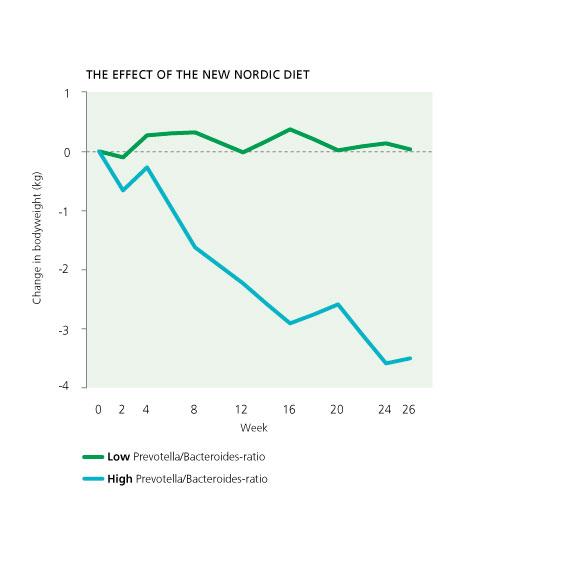 "The study shows that only about half of the population will lose weight if they eat in accordance with the Danish national dietary recommendations and eat more fruit, vegetables, fibers and whole grains. The other half of the population doesn't seem to gain any benefit in weight from this change of diet," says Assistant Professor Mads Fiil Hjorth at the Department of Nutrition, Exercise and Sports at the University of Copenhagen. He continues: "These people should focus on other diet and physical activity recommendations until a strategy that works especially well for them is identified."

The researchers emphasize that they have already confirmed the results in two independent studies, so they are certain that these results are credible.

The results show that biomarkers, e.g. faecal samples, blood samples, or other samples from our body, which says something about our state of health, should play a far greater role in nutritional guidance. Simply because biomarkers allow us to adapt the guidance to the individual.

"This is a major step forward in personalized nutritional guidance. Guidance based on this knowledge of intestinal bacteria will most likely be more effective than the "one size fits all" approach that often characterises dietary recommendations and dietary guidance," says Assistant Professor Mads Fiil Hjorth.

At present it is primarily research units at universities and other academic institutions that examine the composition of intestinal bacteria, but as an effect of this breakthrough the University of Copenhagen has licensed a company in Boston, USA, to develop and publish a concept based on this research, that will be of benefit to obese people.

The results of the study have been published in the article 'Pre-treatment microbial Prevotella-to-Bacteroides ratio, determines body fat loss success during a 6-month randomized controlled diet intervention' in the International Journal of Obesity, one of the world's leading obesity journals.