The Ecological Mystery of Fairy Circles

In the remote Namibian grasslands, visitors come not to see the grazing zebra and oryx but instead a longstanding ecological mystery: barren patches of ground known as fairy circles. These formations, 30 to 100 feet in diameter and ringed with grasses, form a striking, repeating pattern across hundreds of miles of the arid landscape. The fairy circles are long-lived, persisting 30 to 60 years. And no one is sure how they got there.

Now, a team at CU Boulder is working to understand this ecological curiosity. Recently, scientists Lauren Shoemaker, Nichole Barger and Holly Barnard returned from a two-week trip to Namibia to follow up on a field study that launched in 2015. Using a combination of experiments and computer modeling, they hope to answer how the circles are created as well as how they persist for decades. Their work might not only explain this mystery, but also has many implications for agriculture and ecology across the arid regions of the continent.

Over the years, many ideas have been proposed for how these circles form. The legends of the local Himba people describe them as footprints of the gods. Among scientists, some of the proposed causes include plant competition, termites and underground gases. But experimental evidence is scant, because of the fairy circles’ remote location in the Namib desert, hours from gas stations and grocery stores and reachable only by driving off road through sandy dunes.

“When you get something so striking visually to humans, there's a tendency to try to explain it with other mechanisms—something other than the principles that we're taught,” said Barger, a professor in CU Boulder’s Department of Ecology and Evolutionary Biology. “What our group brings is that we're trained as ecologists and environmental scientists, and we just went to the principles of how ecosystems work, and didn't let how cool [fairy circles] were distract us from that.” 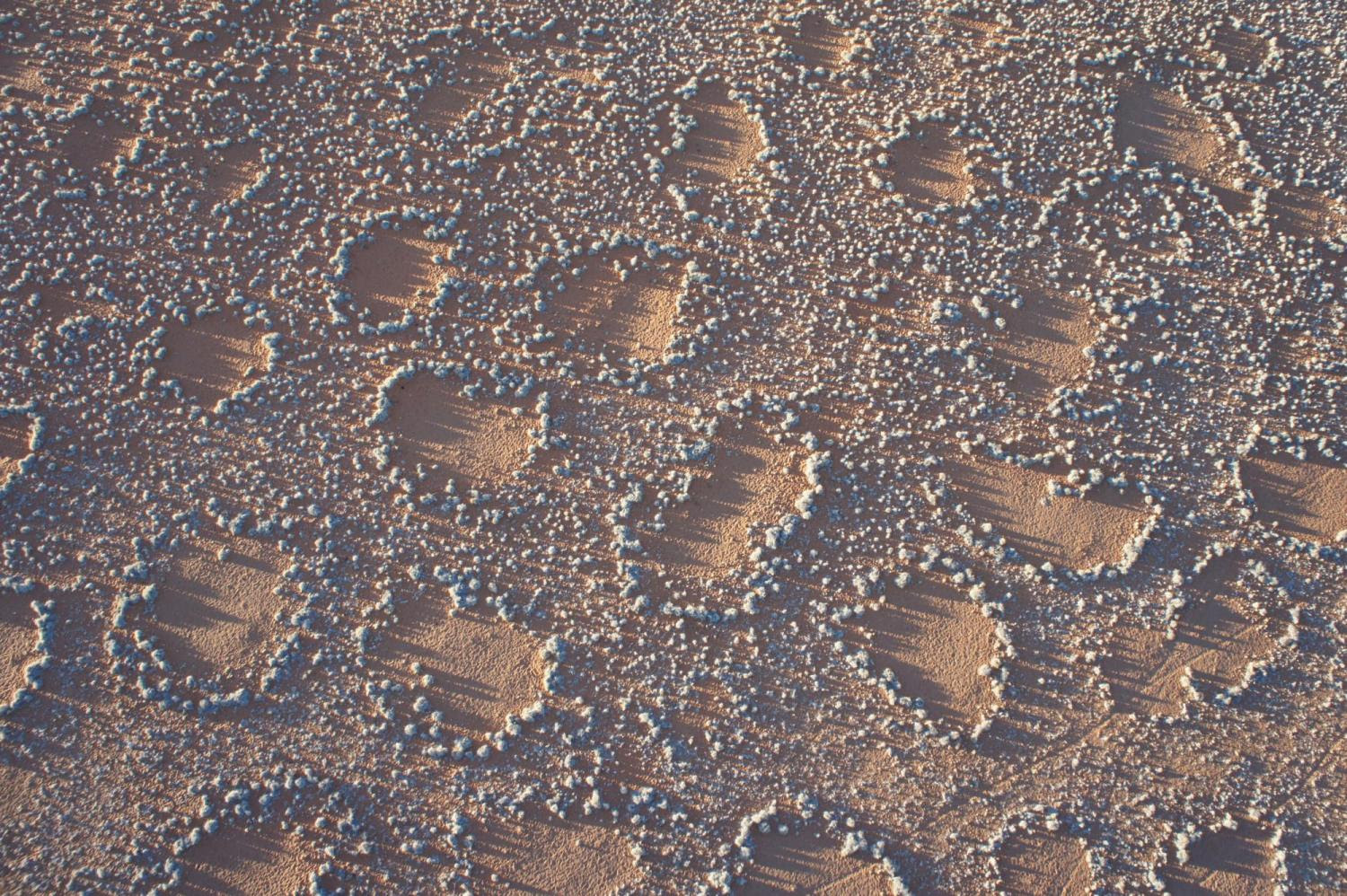 In 2015, Barger set up an experiment to test whether competition between plants or insect attacks could be creating the fairy circles. Barger and her team watered some circles, fertilized and watered others, and dumped termite-killing insecticide on some circles too. The scientists left some control plots with nothing added as well. They planned to see which treatment “killed” the circles. For example, if termites created fairy circles, killing the termites with insecticide should lead to grasses filling in the circle.

After setting up the plots, Barger had to wait. Without rainfall, the circles remain static. Finally, in 2017, heavy rains hit the reserve. So Barger came back with Shoemaker, a former graduate student at CU Boulder who specializes in theoretical ecology, and Barnard, an assistant professor in the Department of Geography.

Barger brought Shoemaker because of her expertise in the field of pattern formation, which spans many disciplines including ecology, economics and mathematics. Shoemaker shared the team's trip in her blog because she knew there was a lot of public interest in fairy circles and wanted to engage people in real time. She also wanted to showcase the all-women team to “show an example that doesn’t necessarily fit preconceived notions of what a scientist looks like.”

After visiting the fairy circle experiment, Shoemaker reported that watered plots only changed a little, and that the water and nutrients plots grew in more. Barger sees the latter observation as solid evidence for the competition hypothesis.

“What we can say at this point is that our hypothesis about nutrients in particular—as important for fairy circles—is confirmed,” said Barger.

In the Namib desert, which receives less than 4 inches of rain annually and has sandy, low-nutrient soil, plants fight for scarce resources. When a struggling plant is outcompeted and dies, more water goes to its neighbors, which then grow large and continue to use more water. These bigger plants draw water away from surrounding plants. This repeated cycle then creates a regular pattern across the landscape, the team’s findings suggest.

But the most striking result was something the researchers had never considered. Barger and her team fenced in some fairy circles to keep out zebras and oryx, which like to munch on scientific equipment. When they came back, they saw that inside fenced plots, plants popped up in the circles, while the unfenced fairy circles remained barren. The team thinks that grazing animals, while not necessarily creating fairy circles, may play an important role in maintaining them. 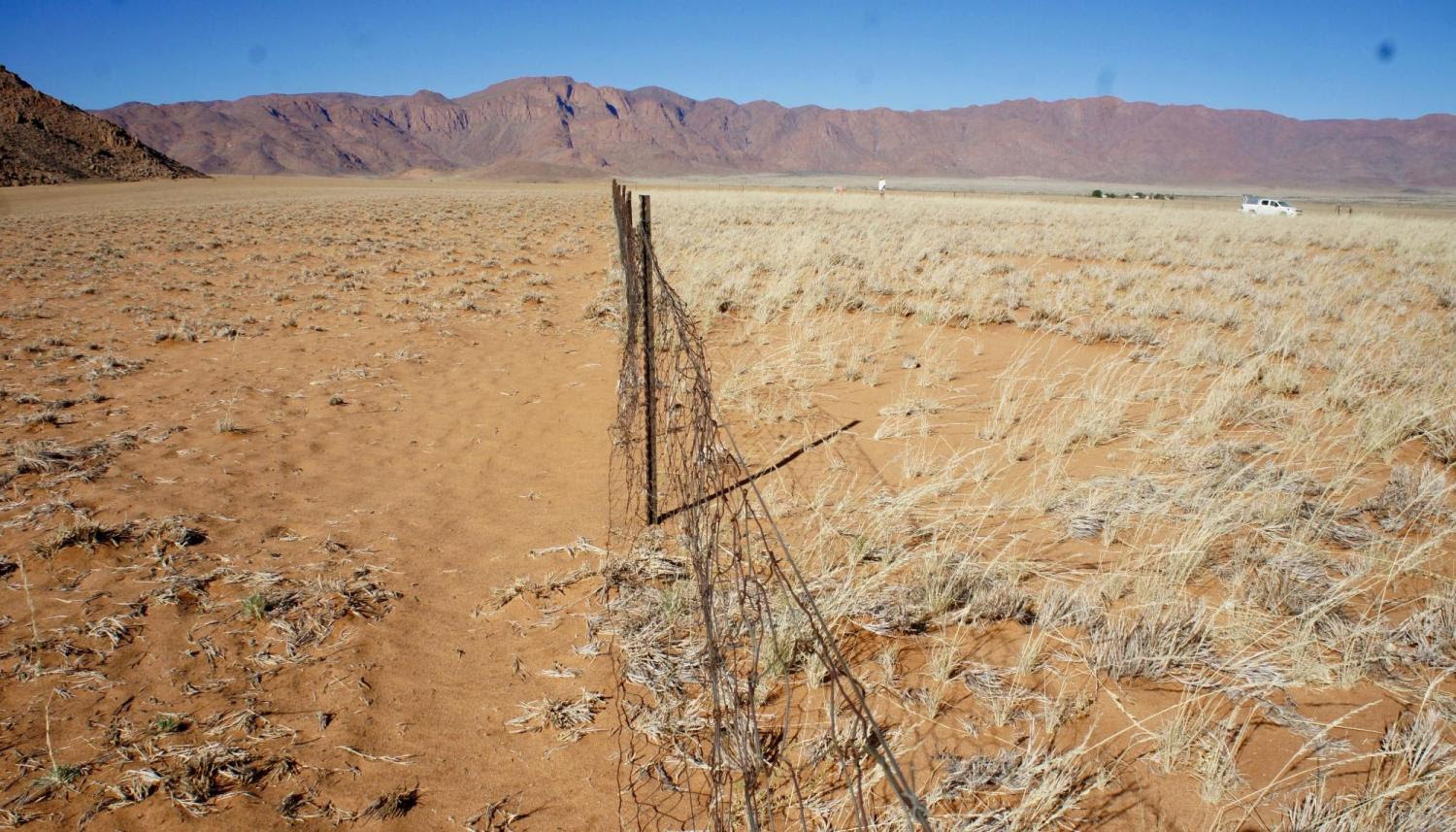 “That’s a whole interesting part of this that no one’s ever really talked about,” said Barger. “We set that up to protect our equipment and it became probably the most important response.”

Walter Tschinkel, an entomologist at Florida State University who helped with set up the experiment, believes the team is on to some promising results. Termites, he said, are a weak contender now. While the insects have been spotted in many circles, there’s no evidence that they are the cause. Instead, they might just be coming in to eat the already-dead grass. It’s hard to explain how or why termites would consistently produce such a circular pattern.

“The [termite] claim is based entirely on correlation,” Tschinkel said.

The team is inching closer to solving the ecological mystery, which has impacts for other environments. Patterns are not unique to fairy circles, Barger said. They are found in trees, leaves and sand dunes.

“We see patterns in nature all the time,” Barger said. “Thinking about these patterns—how water moves, how nutrients move—is really important.”

The fairy circle research could, for example, reveal how water and nutrients travel in desert soils, which could have implications for growing crops or managing livestock in these areas.

“I really like to be at the interface of science and management,” said Barger. “So, once we get scientific results, thinking about how use them, how do we communicate them . . . not only to the public but to land users so that it’s not sitting in a journal, dying a boring death.”

The team is excited for the future of their experiment. The results so far are promising, says Shoemaker, but still young. She’s interested to see what happens to the fairy circles during a drought or after a few consecutive rainy years.

Because of the Namib Desert’s fickle climate, the team may have to wait years before returning, until after the region’s next rainy season. Shoemaker is eager to come back.

“We are hoping to go back next April,” she said. “Hopefully—fingers crossed—it’s going to rain there again.”

Contacts and sources:
University of Colorado Boulder
on September 11, 2017