Almost 50 years after it was first predicted that rapidly rotating stars would emit polarized light, a University of New South Wales (UNSW) Sydney-led team of scientists has succeeded in observing the phenomenon for the first time.

They used a highly sensitive piece of equipment designed and built at UNSW and attached to the Anglo-Australian Telescope at Siding Spring Observatory in western NSW to detect the polarised light from Regulus, one of the brightest stars in the night sky.

The research has provided unprecedented insights into the star, which is in the constellation Leo, allowing the scientists to determine its rate of spinning and the orientation in space of the star's spin axis.

August's total eclipse of the sun with the star Regulus visible as a blue dot in the lower left corner. The photograph was taken in Casper, Wyo. 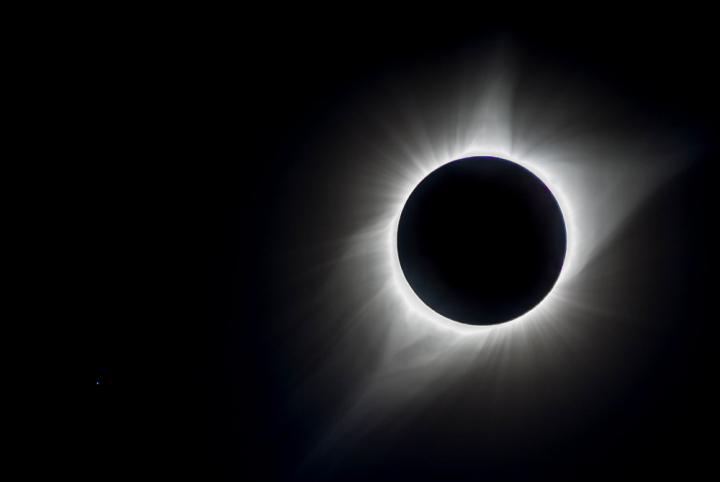 "We found Regulus is rotating so quickly it is close to flying apart, with a spin rate of 96.5 per cent of the angular velocity for break-up," says study first author and UNSW scientist Dr Daniel Cotton, of the School of Physics.

"It is spinning at approximately 320 kilometres per second - equivalent to travelling from Sydney to Canberra in less than a second."

Indian astrophysicist and Nobel laureate Subrahmanyan Chandrasekhar first predicted the emission of polarised light from the edges of stars in 1946, prompting the development of sensitive instruments called stellar polarimeters to try and detect this effect.

Optical polarisation is a measure of the orientation of the oscillations of a light beam to its direction of travel.

In 1968, other researchers built on Chandrasekhar's work to predict that the distorted, or squashed shape, of a rapidly rotating star would lead to the emission of polarised light, but its detection has eluded astronomers until now.

"The instrument we have built, the High Precision Polarimetric Instrument, HIPPI, is the world's most sensitive astronomical polarimeter. Its high precision has allowed us to detect polarised light from a rapidly spinning star for the first time," says Dr Cotton.

"We have also been able to combine this new information about Regulus with sophisticated computer models we have developed at UNSW to determine the star's inclination and rotation rate.

"It has previously been extremely difficult to measure these properties of rapidly rotating stars. Yet the information is crucial for understanding the life cycles of most of the hottest and largest stars in the galaxies, which are the ones that produce the heaviest elements, such as iron and nickel, in interstellar space."

Regulus is about 79 light years away. During the total solar eclipse in the US in August, Regulus was just 1 degree away from the Sun and was, to many people, the only star visible during the eclipse.