"Trilobites are one of the first types of animals to show up in large numbers in the fossil record," said lead author Melanie Hopkins, an assistant curator in the Division of Paleontology at the American Museum of Natural History. "Their exoskeletons were heavy in minerals, and so they preserved really well. But like all fossils, it's very rare to see the preservation of soft tissues like organs or appendages in trilobites, and because of this, our knowledge of the trilobite digestive system comes from a small number of specimens. The new material in this study really expands our understanding."

This photo is of a specimen of the trilobite Palaeolenus lantenoisi from the Guanshan Biota in southern Yunnan Province, China. Rarely are internal organs preserved in fossils, but this specimen shows the digestive system preserved as reddish iron oxides. The digestive system is comprised of a crop (inflated region at top of specimen), lateral glands, and a central canal that runs along the length of the body; the iron oxides that extend beyond the fossil are the remains of gut contents that were extruded during preservation. 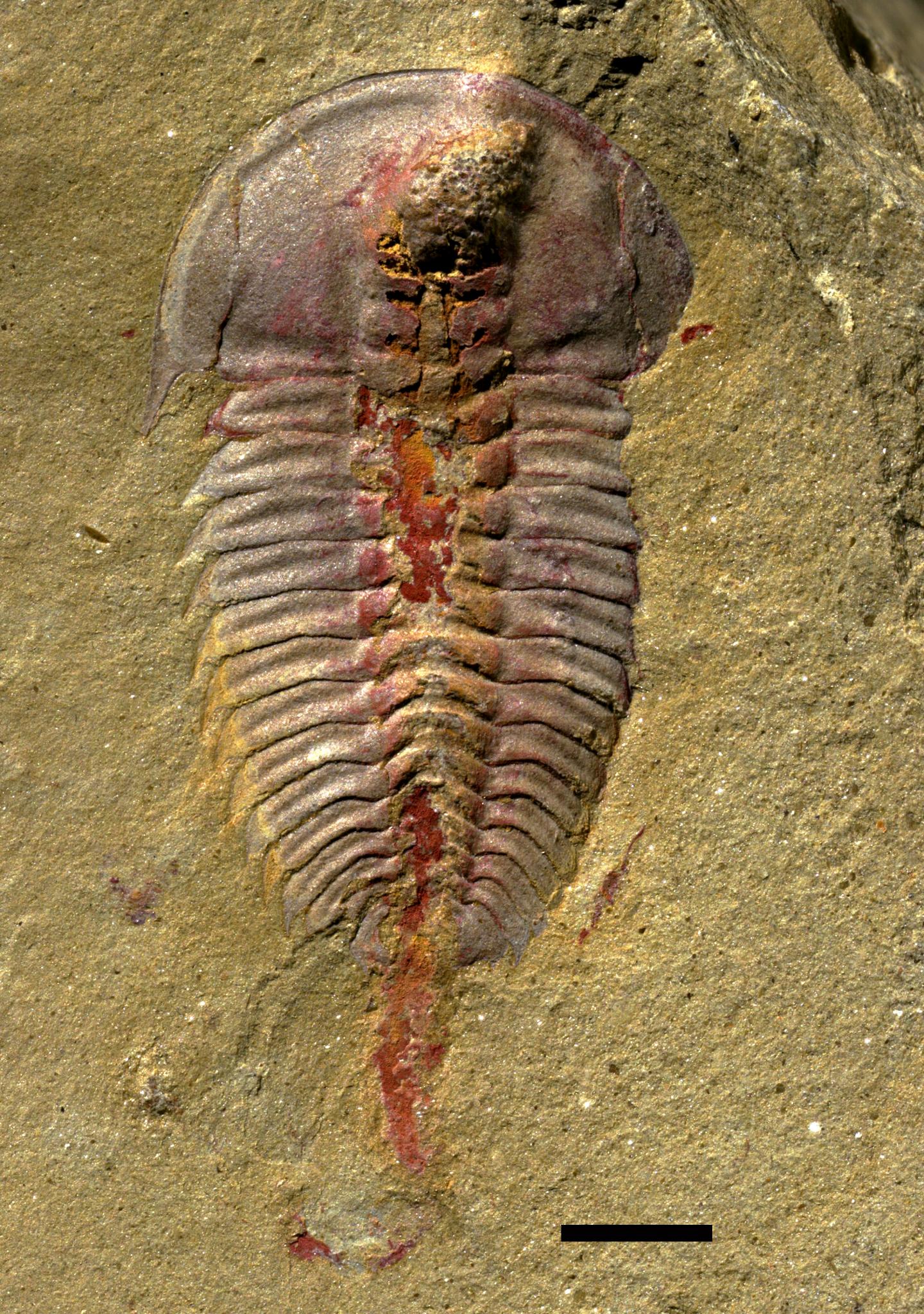 Trilobites are a group of extinct marine arthropods--distantly related to the horseshoe crab--that lived for almost 300 million years. They were extremely diverse, with about 20,000 species, and their fossil exoskeletons can be found all around the world. Most of the 270 specimens analyzed in the new study were collected from a quarry in southern Kunming, China, during an excavation led by Hopkins' co-author, Zhifei Zhang, from Northwest University in Xi'an.

Previous research suggests that two body plans existed for trilobite digestive systems: a tube that runs down the length of the trilobite's body with lateral digestive glands that would have helped process the food; or an expanded stomach, called a "crop", leading into a simple tube with no lateral glands. Until now, only the first type had been reported from the oldest trilobites. Based on this, researchers had proposed that the evolution of the crop came later in trilobite evolutionary history and represented a distinct type of digestive system.

The Chinese trilobite fossils, about 20 percent of which have soft tissue preservation, are dated to the early Cambrian, about 514 million years ago. Contradictory to the previously proposed body plans, the researchers identified crops in two different species within this material. In addition, they found a single specimen that has both a crop and digestive glands--suggesting that the evolution of trilobite digestive systems is more complex than originally proposed.

The study backs up an earlier announcement made by a separate research team, which found evidence for the unusual crop and gland pairing in a single juvenile trilobite specimen from Sweden from the late Cambrian. But the Chinese material presents the oldest example of this complex digestive system in a mature trilobite, wiping away doubts that the dual structures might just be part of the animal's early development.

"This is a very rigorous study based on multiple specimens, and it shows that we should start thinking about this aspect of trilobite biology and evolution in a different way," Hopkins said.


PLOS ONE paper: http://journals.plos.org/plosone/article?id=10.1371/journal.pone.0184982
Other authors of the study include Feiyang Chen, from Northwest University in Xi'an, and Shixue Hu, from the Chengdu Institute of Geology and Mineral Resources.