NASA scientists have found evidence that Mars' crust is not as dense as previously thought, a clue that could help researchers better understand the Red Planet's interior structure and evolution.

A lower density likely means that at least part of Mars' crust is relatively porous. At this point, however, the team cannot rule out the possibility of a different mineral composition or perhaps a thinner crust.

"The crust is the end-result of everything that happened during a planet's history, so a lower density could have important implications about Mars' formation and evolution," said Sander Goossens of NASA's Goddard Space Flight Center in Greenbelt, Maryland. Goossens is the lead author of a Geophysical Research Letters paper describing the work.

A new map of the thickness of Mars' crust shows less variation between thicker regions (red) and thinner regions (blue), compared to earlier mapping. This view is centered on Valles Marineris, with the Tharsis Montes near the terminator to its west. The map is based on modeling of the Red Planet's gravity field by scientists at NASA's Goddard Space Flight Center in Greenbelt, Maryland. The team found that globally Mars' crust is less dense, on average, than previously thought, which implies smaller variations in crustal thickness. 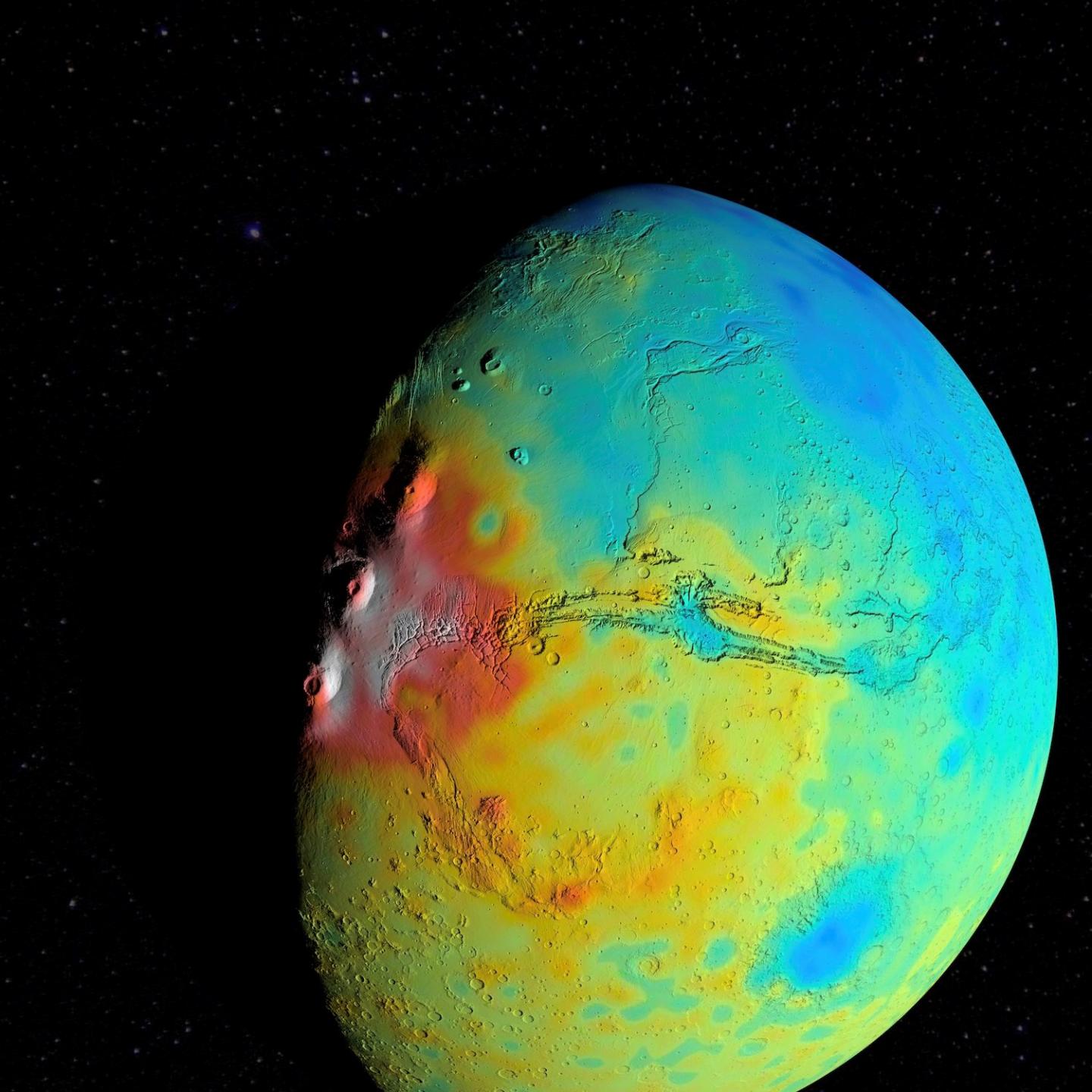 The new value is derived from Mars' gravity field, a global model that can be extracted from satellite tracking data using sophisticated mathematical tools. The gravity field for Earth is extremely detailed, because the data sets have very high resolution. Recent studies of the Moon by NASA's Gravity Recovery and Interior Laboratory, or GRAIL, mission also yielded a precise gravity map.

The data sets for Mars don't have as much resolution, so it's more difficult to pin down the density of the crust from current gravity maps. As a result, previous estimates relied more heavily on studies of the composition of Mars' soil and rocks.

"As this story comes together, we're coming to the conclusion that it's not enough just to know the composition of the rocks," said Goddard planetary geologist Greg Neumann, a co-author on the paper. "We also need to know how the rocks have been reworked over time."

Goossens and colleagues started with the same data used for an existing gravity model but put a new twist on it by coming up with a different constraint and applying it to obtain the new solution. A constraint compensates for the fact that even the best data sets can't capture every last detail. Instead of taking the standard approach, known to those in the field as the Kaula constraint, the team created a constraint that considers the accurate measurements of Mars' elevation changes, or topography.

"With this approach, we were able to squeeze out more information about the gravity field from the existing data sets," said Goddard geophysicist Terence Sabaka, the second author on the paper.

Before taking on Mars, the researchers tested their approach by applying it to the gravity field that was in use before the GRAIL mission. The resulting estimate for the density of the moon's crust essentially matched the GRAIL result of 2,550 kilograms per meter cubed (about 159 pounds per cubic foot).

From the new model, the team generated global maps of the crust's density and thickness. These maps show the kinds of variations the researchers expect, such as denser crust beneath Mars' giant volcanoes.

The researchers note that NASA's InSight mission -- short for Interior Exploration using Seismic Investigations, Geodesy and Heat Transport -- is expected to provide the kinds of measurements that could confirm their finding. This Discovery Program mission, scheduled for launch in 2018, will place a geophysical lander on Mars to study its deep interior.


For the team's model, along with the derived density map and crustal thickness models, visit: https://pgda.gsfc.nasa.gov

For more about NASA's Mars explorations, visit: http://www.nasa.gov/mars
on September 14, 2017