The first large-scale genetic study of people in Papua New Guinea has shown that different groups within the country are genetically highly different from each other. Scientists at the Wellcome Trust Sanger Institute and their colleagues at the University of Oxford and the Papua New Guinea Institute of Medical Research reveal that the people there have remained genetically independent from Europe and Asia for most of the last 50,000 years, and that people from the country’s isolated highlands region have been completely independent even until the present day.

Reported (15 September) in Science, the study also gives insights into how the development of agriculture and cultural events such as the Bronze or Iron Age could affect the genetic structure of human societies.

A resident of Boga-Boga, a village on the southeast coast of mainland Papua New Guinea 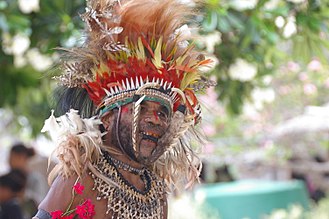 Papua New Guinea is a country in the southwestern Pacific with some of the earliest archaeological evidence of human existence outside Africa. Largely free from Western influence and with fascinating cultural diversity, it has been of enormous interest to anthropologists and other scientists seeking to understand human cultures and evolution.

Locations of people studied from Papua New Guinea. Each language group is represented by a circle; the area indicates the number of genotyped individuals, and the color indicates the top-level language phylum. The study found that people speaking different languages were strongly genetically distinct from each other.

With approximately 850 domestic languages, which account for over 10 per cent of the world’s total, Papua New Guinea is the most linguistically diverse country in the world. To discover if the linguistic and cultural diversity was echoed in the genetic structure of the population, researchers studied the genomes of 381 Papuan New Guinean people from 85 different language groups within the country.

The researchers looked at more than a million genetic positions in the genome of each individual, and compared them to investigate genetic similarities and differences. They found that groups of people speaking different languages were surprisingly genetically distinct from each other.

“This is the first large-scale study of genetic diversity and population history in Papua New Guinea. Our study revealed that the genetic differences between groups of people there are generally very strong, often much stronger even than between major populations within all of Europe or all of East Asia.” says Anders Bergström, the first author on the paper from the Wellcome Trust Sanger Institute

“We found a striking difference between the groups of people who live in the mountainous highlands and those in the lowlands, with genetic separation dating back 10,000-20,000 years between the two. This makes sense culturally, as the highland groups historically have kept to themselves, but such a strong genetic barrier between otherwise geographically close groups is still very unusual and fascinating.” says Professor Stephen J. Oppenheimer, second author of the paper from the Wellcome Trust Centre for Human Genetics, University of Oxford*

Human evolution in Europe and Asia has been greatly influenced by the development of agriculture around 10,000 years ago. When small bands of hunter-gatherers settled into villages and started farming, they expanded and over time gave rise to more genetically homogenous (similar) societies. However, despite the independent development of agriculture in Papua New Guinea at about the same time, the same process of homogenization did not occur here. This may indicate that other historical processes in Europe and Asia, such as the later Bronze and Iron Ages, were the key events that shaped the current genetic structure of those populations.


“Using genetics, we were able to see that people on the island of New Guinea evolved independently from rest of the world for much of the last 50,000 years. This study allows us to glimpse a different version of human evolution from that in Europe and Asia, one in which there was agriculture but no later Bronze Age or Iron Age. Papua New Guinea might show the genetic, cultural and linguistic diversity that many settled human societies would have had before these technological transformations.” says Dr Chris Tyler-Smith, corresponding author on the paper from the Wellcome Trust Sanger Institute