In 1974, images acquired from NOAA satellites revealed a puzzling phenomenon: a 250,000 square kilometer opening in the winter sea ice in the Weddell Sea, south of South America. The opening, known as a polynya, persisted over three winters. Such expansive ice-free areas in the ocean surrounding Antarctica have not been seen since, though a small polynya was seen last year.

In a new analysis of climate models, researchers from the University of Pennsylvania, Spain's Institute of Marine Sciences and Johns Hopkins University reveal the significant global effects that these seemingly anomalous polynyas can have. Their findings indicate that heat escaping from the ocean through these openings impacts sea and atmospheric temperatures and wind patterns around the globe and even rainfall around the tropics. Though this process is part of a natural pattern of climate variability, it has implications for how the global climate will respond to future anthropogenic warming.

A polynya, or an opening in the sea ice, was present in the Southern Ocean in the 1970s. This image shows the sea ice concentration averaged over three September months 1974-1976 during the Weddell Polynya, made with data from the NIMBUS-V satellite from the National Snow Ice Data Center. 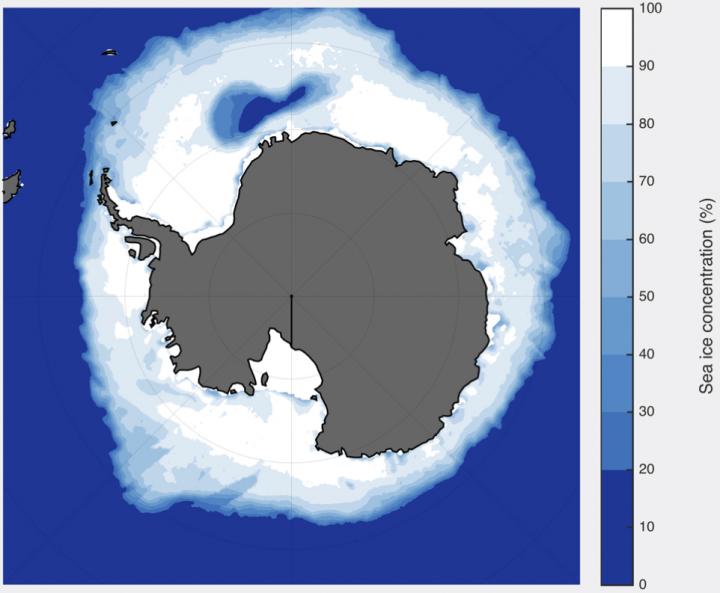 "This small, isolated opening in the sea ice in the Southern Ocean can have significant, large-scale climate implications," said Irina Marinov, a study author and assistant professor in Penn's Department of Earth and Enviromental Science in the School of Arts & Sciences. "Climate models suggest that, in years and decades with a large polynya, the entire atmosphere warms globally, and we see changes in the winds in the Southern Hemisphere and a southward shift in the equatorial rain belt. This is attributable to the polynya."

The study appears in the Journal of Climate. Marinov coauthored the work with Anna Cabre, a former postdoc in Marinov's lab and now an oceanographer with the Institue of Marine Sciences in Barcelona, and Anand Gnanadesikan, a professor in the Department of Earth and Planetary Science at Johns Hopkins.

Until recently, climate scientists and oceanographers believed that atmospheric and ocean conditions around the tropics were the primary drivers in affecting conditions outside the tropics. But in the last few years, Marinov and collaborators and others have shown that the opposite is also true: the Southern Ocean has an important role in affecting tropical and Northern Hemisphere climates.

In the current work, Marinov and colleagues used powerful models that simulate past and future climate to determine how the effects of polynya ripple out around the globe.

Their model indicated that polynyas and accompanying open-ocean convection occur roughly every 75 years. When they occur, the researchers observed, they act as a release valve for the ocean's heat. Not only does the immediate area warm, but there are also increases in overall sea-surface and atmospheric temperatures of the entire Southern Hemisphere and, to a lesser extent, the Northern Hemisphere, as well.

Changes in north-south temperature gradients lead to changes in wind patterns as well.

"We are seeing a decrease in what we call the Southern Hemisphere westerlies and changes in trade winds," Marinov said. "And these winds affect storms, precipitation and clouds."

Among these changes in precipitation is a shift in the Intertropical Convergence Zone, an equatorial belt where trade winds converge, resulting in intense precipitation. When a polynya occurs, this rain belt moves south a few degrees and stays there for 20 to 30 years before shifting back.

"This affects water resources in, for example, Indonesia, South America and sub-Saharan Africa," said Marinov. "We have a natural variation in climate that may be, among other effects, impacting agricultural production in heavily populated regions of the world."

Given these broad-scale implications of a Southern Ocean phenomenon, Marinov underscores the need to increase monitoring in the region. She is part of an effort called SOCCOM, for Southern Ocean Carbon and Climate Observations and Modeling, placing robotic floats in the Southern Ocean to collect data on ocean temperature, salinity, carbon, nutrients and oxygen.

"We're also urging people to keep a close eye on the satellites to look for other polynyas, this year and going forward," Marinov said.

Earlier research by Marinov's group and collaborators suggested that, under climate change, polynyas may become less frequent. As sea ice melts it freshens the top layer of the sea surface, making it lighter and less likely to mix with the heavier bottom waters. Marinov notes that the fact that no significant polynyas opened up from the mid-1970s until last year may have contributed to the so-called "climate hiatus" in the late 1990s and early 2000s, when global average surface temperatures appeared to stall in their otherwise persistent upward climb.

"During this hiatus period abnormal amounts of heat were stored in the subsurface ocean waters" Marinov said. "Most research has attributed this hiatus to a prolonged La Niña period, resulting in a storage of heat in the low-latitude Pacific. But I think that a lack of a Weddell Sea polynya also contributed, storing more heat in the Southern Ocean and preventing the additional release of heat to the atmosphere."

The work raises many new questions, such as how a decreasing sea ice extent, including the recent breaking off of a massive chunk of the Antarctic peninsula, will affect the frequency of polynyas and how the presence or absence of polynyas will affect how much atmospheric temperatures warm in response to anthropogenic climate change.

"This investigating into polynyas and Southern Ocean convection turned out to be a very important and interesting story for the global climate that we think a lot of people will be studying in the next decade," Marinov said.