How Did Neanderthal Brains Grow?

How did Neanderthals grow? Does modern man develop in the same way as Homo neanderthalensis did? How does the size of the brain affect the development of the body? A study led by the Spanish National Research Council (CSIC) researcher, Antonio Rosas, has studied the fossil remains of a Neanderthal child's skeleton in order to establish whether there are differences between the growth of Neanderthals and that of sapiens.

According to the results of the article, which are published in Science, both species regulate their growth differently to adapt their energy consumption to their physical characteristics.

"Discerning the differences and similarities in growth patterns between Neanderthals and modern humans helps us better define our own history. Modern humans and Neanderthals emerged from a common recent ancestor, and this is manifested in a similar overall growth rate", explains CSIC researcher, Antonio Rosas, from Spain's National Natural Science Museum (MNCN).

As fellow CSIC researcher Luis Ríos highlights, "Applying paediatric growth assessment methods, this Neanderthal child is no different to a modern-day child". The pattern of vertebral maturation and brain growth, as well as energy constraints during development, may have marked the anatomical shape of Neanderthals.

Skeleton of the Neanderthal boy recovered from the El Sidrón cave (Asturias, Spain).

The cost, in terms of energy, of anatomical growth of the modern brain is unusually high, especially during breastfeeding and during infancy, and this seems to require a slowing down of body growth. The growth and development of this juvenile Neanderthal matches the typical characteristics of human ontogeny, where there is a slow anatomical growth between weaning and puberty. This could compensate for the immense energy cost of developing such a large brain. 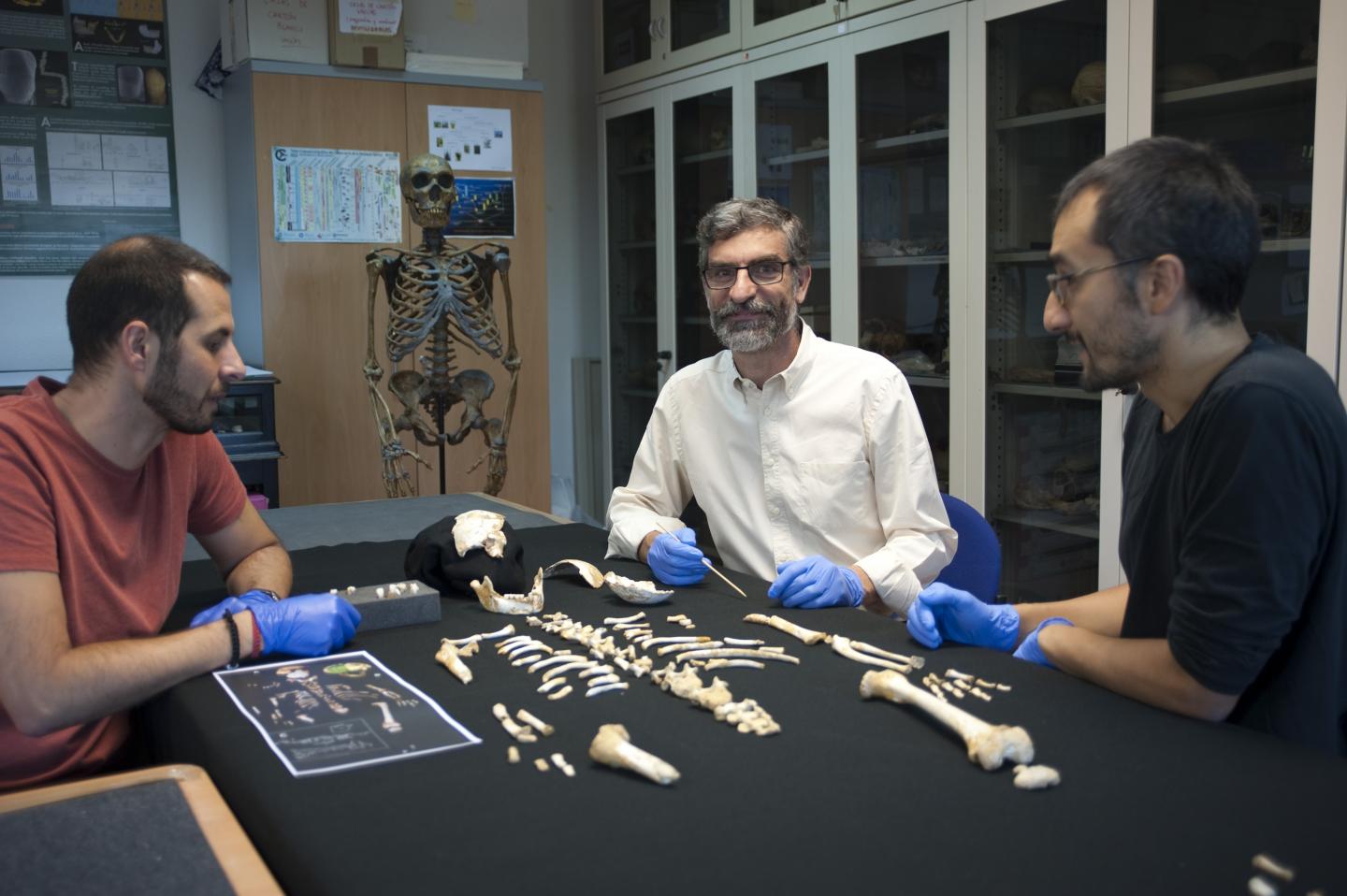 
In fact, the skeleton and dentition of this Neanderthal present a physiology which is similar to that of a sapiens of the same age, except for the thorax area, which corresponds to a child between five and six years, in that it is less developed. "The growth of our Neanderthal child was not complete, probably due to energy saving", explains CSIC researcher Antonio Rosas.

The only divergent aspect in the growth of both species is the moment of maturation of the vertebral column. In all hominids, the cartilaginous joints of the middle thoracic vertebrae and the atlas are the last to fuse, but in this Neanderthal, fusion occurred about two years later than in modern humans.

"The delay of this fusion in the vertebral column may indicate that Neanderthals had a decoupling of certain aspects in the transition from infancy to the juvenile phase. Although the implications are unknown, this feature could be related to the characteristic enlarged shape of the Neanderthal torso, or slower brain growth", says Rosas.

The protagonist of this study was 7.7 years old, weighed 26 kilos and measured 111 centimetres at the time of death. Although the genetic analyses failed to confirm the child's sex, the canine teeth and the sturdiness of the bones showed that it to be a male. 138 pieces, 30 of them teeth (including some milk teeth), and part of the skeleton- including some fragments of the skull from the individual- identified as El Sidrón J1, have recovered.

The researchers have been able to establish that our protagonist was right-handed and was already performing adult tasks, such as using his teeth as a third hand to handle skins and plant fibres. In addition, they know who his mother was, and that the child protagonist of this investigation had a younger brother in the group. Furthermore, this child was found to have suffered from enamel hypoplasia when he was two or three years old. Hypoplasia (white spots on the teeth, especially visible in the upper incisors), occurs when the teeth have less enamel than normal, the cause usually being malnutrition or disease.

Discovered in 1994, the El Sidrón cave, located in Piloña (in Asturias, northern Spain) has provided the best collection of Neanderthals that exists on the Iberian Peninsula. The team has recovered the remains of 13 individuals from the cave. The group consisted of seven adults (four women and three men), three teenagers and three younger children.

Previous studies have been carried out by a multidisciplinary team led by the paleoanthropologist Antonio Rosas (CSIC's National Museum of Natural Sciences), the geneticist Carles Lalueza-Fox (Institute of Evolutionary Biology, run by CSIC and the Pompeu Fabra University) and by the archaeologist Marco de la Rasilla (University of Oviedo).