The shock from a young electric eel feels like accidentally touching a horse fence. A big one is more like getting tasered — by nine of those devices at once.

Vanderbilt University researcher Ken Catania knows because he stuck his arm into a tank with small eel 10 times. It was the only way to get accurate measurements of the circuit created by animal, arm and water. Measuring the shock from those interactions allowed him to solve an equation he can extrapolate to measure the power released by bigger eels, which can grow to 8 feet or longer

The electric eel has always been noted for its impressive ability to shock and subdue its prey. It's recently become clear that electric eels also use a clever trick to deliver an intense, Taser-like jolt to potential predators: they leap from the water to target threatening animals, humans included, above water. Now, a researcher reporting in Current Biology on September 14 has measured (and experienced) just how strong that jolt can be.

Those stunning leaps make for a more painful experience because they prevent the eels' electrical discharges from weakening as they dissipate through the water.
A series of photos captures Finless, a juvenile electric eel, jumping out of the water to shock Catania’s arm.

"We've known these animals give off a huge amount of electricity, and everybody thought that was really amazing," says Kenneth Catania of Vanderbilt University. "But they aren't just simple animals that go around shocking stuff. They've evolved to produce stronger and stronger electrical discharges, and in concert they've evolved these behaviors to more efficiently use them."

Catania earlier showed that the eels curl their bodies around their prey to double the power of their electrical discharge. In the course of his studies, he noticed something else unusual. If he used an electrically conductive, metal net to scoop up electric eels in his lab, the animals leapt from the water to attack the net.


.
Catania, Stevenson Professor of Biological Sciences, studies the neurobiology of predators and prey and last year proved the validity of a controversial 200-year-old account of eels leaping out of Amazonian waters to shock horses. But documenting their leaping ability left him wondering about the resistances and current for each component of an attack.

Catania realized he had accidentally imitated a predatory attack on his eels in shallow water. But, at first, he was "just confused" by their behavior. Why didn't they simply swim away? He soon realized the leaping might help the eels to effectively target a would-be predator and intensify the shock.

“It was definitely a good lesson in how efficient the electric eel would be at deterring a predator,” said Catania, who worked with a 16-inch-long juvenile eel he affectionately named Finless. “Eels are essentially batteries immersed in water, and I wanted to solve the question of how powerful those batteries are. What’s the internal resistance of the battery? What’s the resistance of the water? My past research left out the last variable: my arm.”

A graphic of the device Ken Catania used to complete the circuit among eel, arm and water. 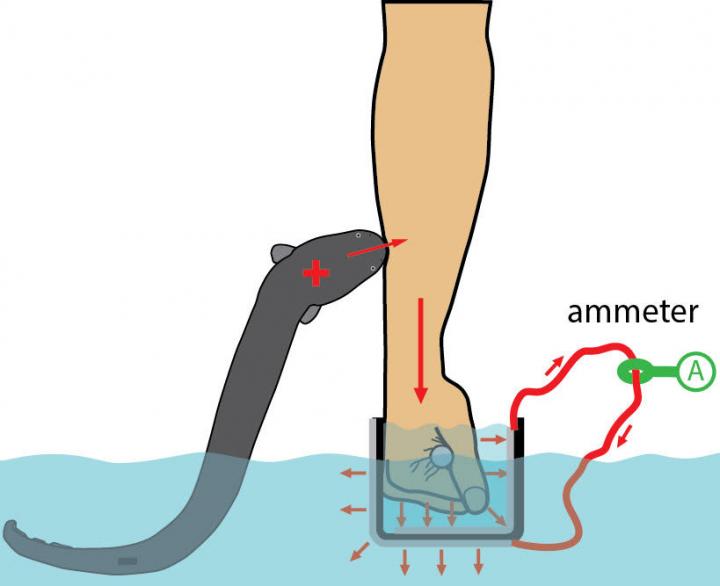 
To close the circuit and get the measurement, he created a device that used copper wire to conduct the electricity from the shock to his arm back to the water, one of the methods documented in his paper “Power Transfer to a Human during an Electric Eel’s Shocking Leap.” It will be published in the Sept. 25 issue of Current Biology.

Catania said the research reminded him that there’s always something more to learn about electric eels, even though they’ve been studied for 200 years.

“They’re so much more sophisticated than we possibly could have imagined,” he said. “This animal can generate hundreds of volts, but they’ve also evolved to very efficiently deliver that electricity.”

In fact, electric eels' leaping behavior had been described by Alexander von Humboldt way back in the 1800s. Humboldt claimed to have witnessed a dramatic battle between electric eels and horses in the Amazon. But, Catania says, "No one really necessarily believed it, or if they did, they thought it was just kind of weird." Whatever they thought, it was more or less forgotten.

To understand the dynamics of the electrical circuit created when an eel contacts another animal, Catania developed an apparatus to accurately measure the strength of the electric current through a human arm when the electric eels leapt in attack. Catania put that apparatus to use with his own arm and a relatively small, and therefore less powerful, eel.

As reported in the new study, the electrical current delivered by the eel peaked at 40-50 milliamps. That's more than enough to cause a person or animal considerable pain, but not enough to actually hurt them. In a video, one can see Catania's arm reflexively pull back, an involuntary reaction similar to what would happen if you touched a hot stove.

"It's impressive that a little eel could deliver that much electricity," Catania says. Of course, they have good reason as they may encounter crocodiles, predatory cats, and "who knows what else," he adds. "We don't know the main driver of the behavior, but they need to deter predators, and I can tell you it's really good at that. I can't imagine an animal that had received this [jolt] sticking around."

Now that he's been able to measure the strength of the electrical current, Catania says he can solve the rest of the circuit. That means it's now possible to estimate the power of a shock delivered by eels of various size or under different circumstances. It turns out the findings are relevant to humans, too. Catania notes that a YouTube video that recently surfaced and went viral shows a fisherman being shocked by a leaping electric eel in the Amazon.

When Catania first saw that footage, it surprised him. But, he now realizes, it's something that's "probably happened a lot." The only difference in the recent case is that someone managed to successfully capture it on video. Now, after voluntarily receiving more shocks in his lab than he cares to recount, Catania has, too.