Detecting Cosmic Rays from a Galaxy Far, Far Away

In an article published today in the journal Science, the Pierre Auger Collaboration has definitively answered the question of whether cosmic particles from outside the Milky Way Galaxy. The article, titled "Observation of a large-scale anisotropy in the arrival directions of cosmic rays above 8 × 1018 eV", notes that studying the distribution of the cosmic ray arrival directions is the first step in determining where extragalactic particles originate.

The collaborating scientists were able to make their recordings using the largest cosmic-ray observatory ever built, the Pierre Auger Observatory in Argentina. Included in this collaboration are David Nitz and Brian Fick, professors of physics at Michigan Technological University.

"We are now considerably closer to solving the mystery of where and how these extraordinary particles are created, a question of great interest to astrophysicists," says Karl-Heinz Kampert, a professor at the University of Wuppertal in Germany and spokesperson for the Auger Collaboration, which involves more than 400 scientists from 18 countries.

At the Pierre Auger Observatory in Argentina, cosmic rays have been detected from far off galaxies.

Astronomer Carl Sagan once said, "The nitrogen in our DNA, the calcium in our teeth, the iron in our blood, the carbon in our apple pies were made in the interiors of collapsing stars. We are made of starstuff."

To put it simply, understanding cosmic rays and where they originate can help us answer fundamental questions about the origins of the universe, our galaxy and ourselves.

It's extremely rare for cosmic rays with energy greater than two joules to reach Earth; the rate of their arrival at the top of the atmosphere is only about one per square kilometer per year, the equivalent to one cosmic ray hitting an area the size of a soccer field about once per century.

This map depicts the placement of the surface detectors in the array. 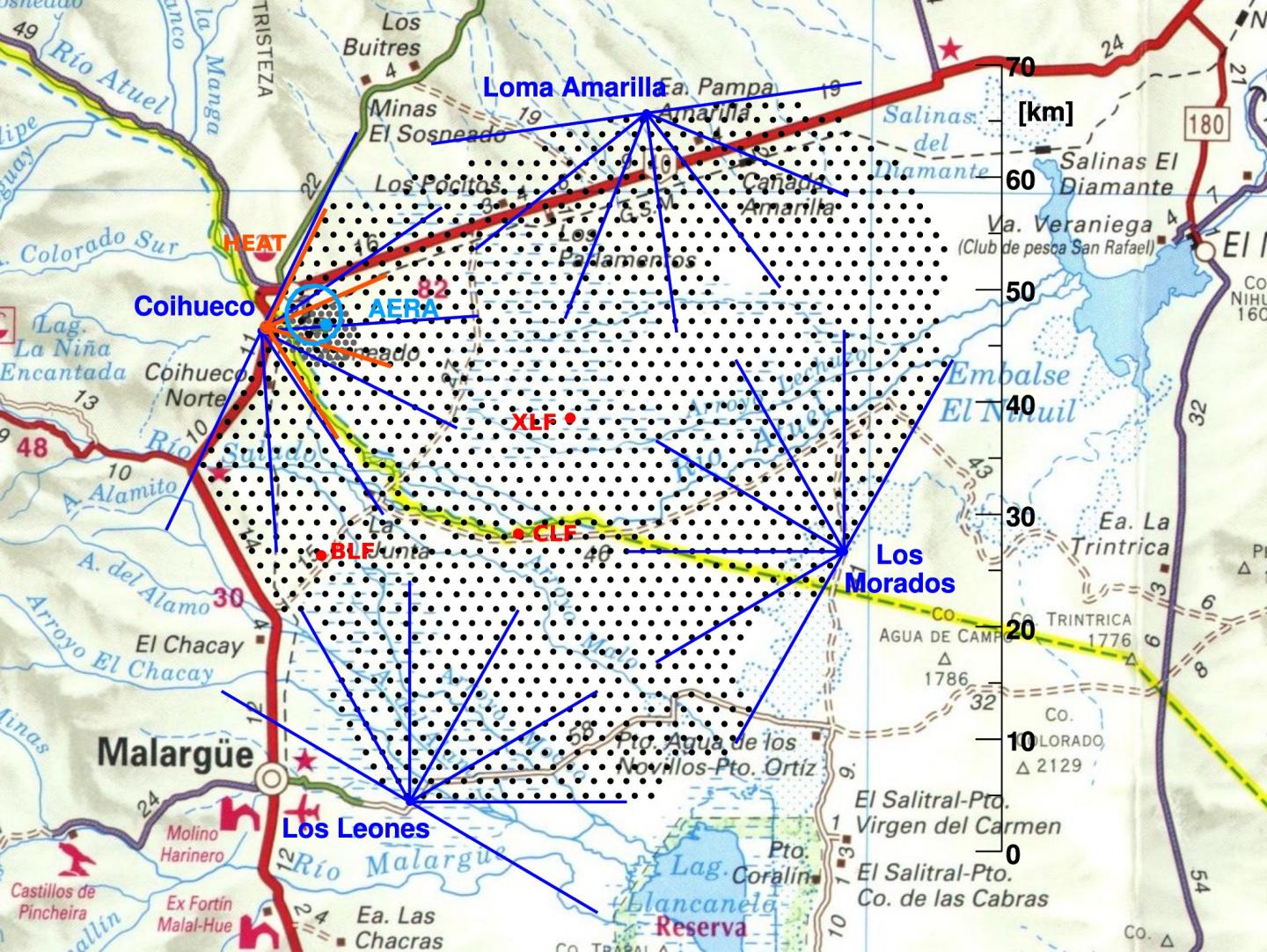 A joule is a measurement of energy; one joule is equivalent to one 3,600th of a watt-hour. When a single cosmic ray particle hits the Earth's atmosphere, that energy is deposited within a few millionths of a second.

Such rare particles are detectable because they create showers of electrons, photons and muons through successive interactions with the nuclei in the atmosphere. These showers spread out, sweeping through the atmosphere at the speed of light in a disc-like structure, like a giant dinner-plate, several kilometers in diameter. They contain more than 10 billion particles.

At the Pierre Auger Observatory, cosmic rays are detected by measuring the Cherenkov light--electromagnetic radiation emitted by charged particles passing through a medium, such as water, at greater than the phase velocity of light in that medium. The team measures the Cherenkov light produced in a detector, which is a large plastic structure that contains 12 tons of water. They pick up a signal in a few detectors within an array of 1,600 detectors.

The detectors are spread over 3,000 square kilometers near the town of Malargüe in western Argentina, an area comparable in size to Rhode Island. The times of arrival of the particles at the detectors, measured with GPS receivers, are used to determine the direction from which the particles came within approximately one degree.

By studying the distribution of the arrival directions of more than 30,000 cosmic particles, the Auger Collaboration has discovered an anisotropy, which is the difference in the rate of cosmic ray arrivals depending in which direction you look. This means the cosmic rays do not come uniformly from all directions; there is a direction from which the rate is higher. 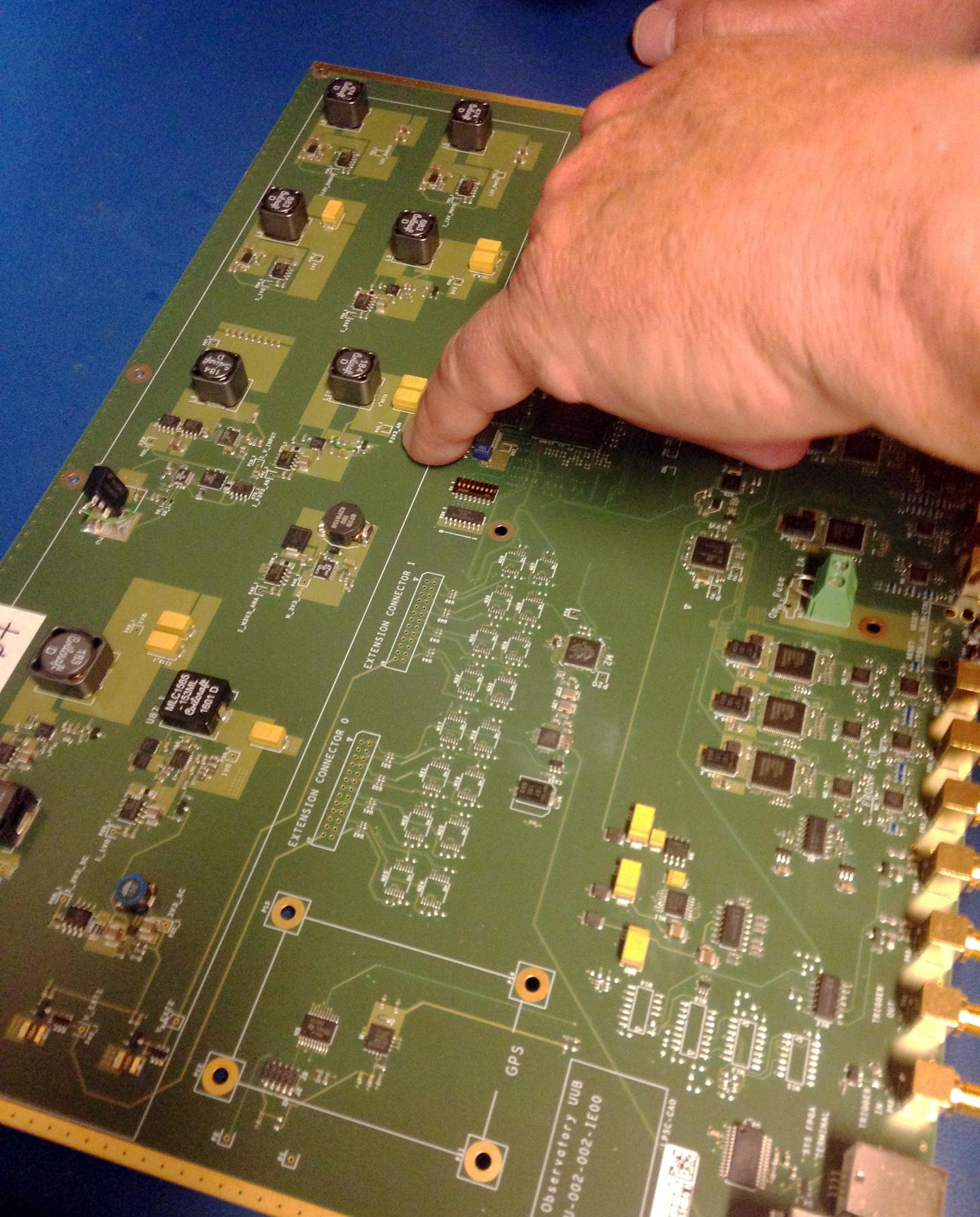 
The anisotropy is significant at 5.2 standard deviations (a chance of about two in ten million) in a direction where the distribution of galaxies is relatively high. Although this discovery clearly indicates an extragalactic origin for the particles, the specific sources of the cosmic rays are still unknown.

The direction points to a broad area of sky rather than to specific sources because even such energetic particles are deflected by a few tens of degrees in the magnetic field of our galaxy.

There have been cosmic rays observed with even higher energy those used in the Pierre Auger Collaboration study, some even with the kinetic energy of well-struck tennis ball. As the deflections of such particles are expected to be smaller because of their higher energy, the arrival directions should point closer to their birthplaces. Such cosmic rays are even rarer and further studies are underway to pin down which extragalactic objects are the sources.

Knowledge of the nature of the particles will aid this identification, and continuing work on this problem is targeted in the upgrade of the Auger Observatory to be completed in 2018.

It Takes A (Global) Village

Conducting this caliber of science is not the undertaking of one individual. More than 400 scientists have contributed to the research. At Michigan Tech, David Nitz, professor of physics, contributes to the electronics that record the signals in the water tanks. He has written the code that is programmed into the circuits, which converts the Cherenkov light in the water tank detectors into digital signals. This enables the hardware to make very fast decisions about the signals recorded in the tanks and whether they're worth further analysis.

"I really enjoy this kind of science. But I'm a hands-on guy," Nitz says. "I visualize how we go from concept to actually building an instrument so we can address that science. That's what I've been doing all my scientific career: answering how do we address making those measurements."

Part of the upgrade to the Auger Observatory is to replace older circuit boards with newer ones that have greater capability to process signals faster and more accurately, and incorporate the signals from additional detectors. These additional detectors include a scintillator detector above each surface detector, and adding a fourth photomultiplier tube to each detector.