Climate Change Challenges the Survival Of Fish Across The World

Climate change will force many amphibians, mammals and birds to move to cooler areas outside their normal ranges, provided they can find space and a clear trajectory among our urban developments and growing cities.

But what are the chances for fish to survive as climate change continues to warm waters around the world?

University of Washington researchers are tackling this question in the first analysis of how vulnerable the world's freshwater and marine fishes are to climate change. Their paper, appearing online Sept. 11 in Nature Climate Change, used physiological data to predict how nearly 3,000 fish species living in oceans and rivers will respond to warming water temperatures in different regions.

Fish species in many river systems, including the John Day River pictured, will face the challenge of coping with warmer waters in the future. 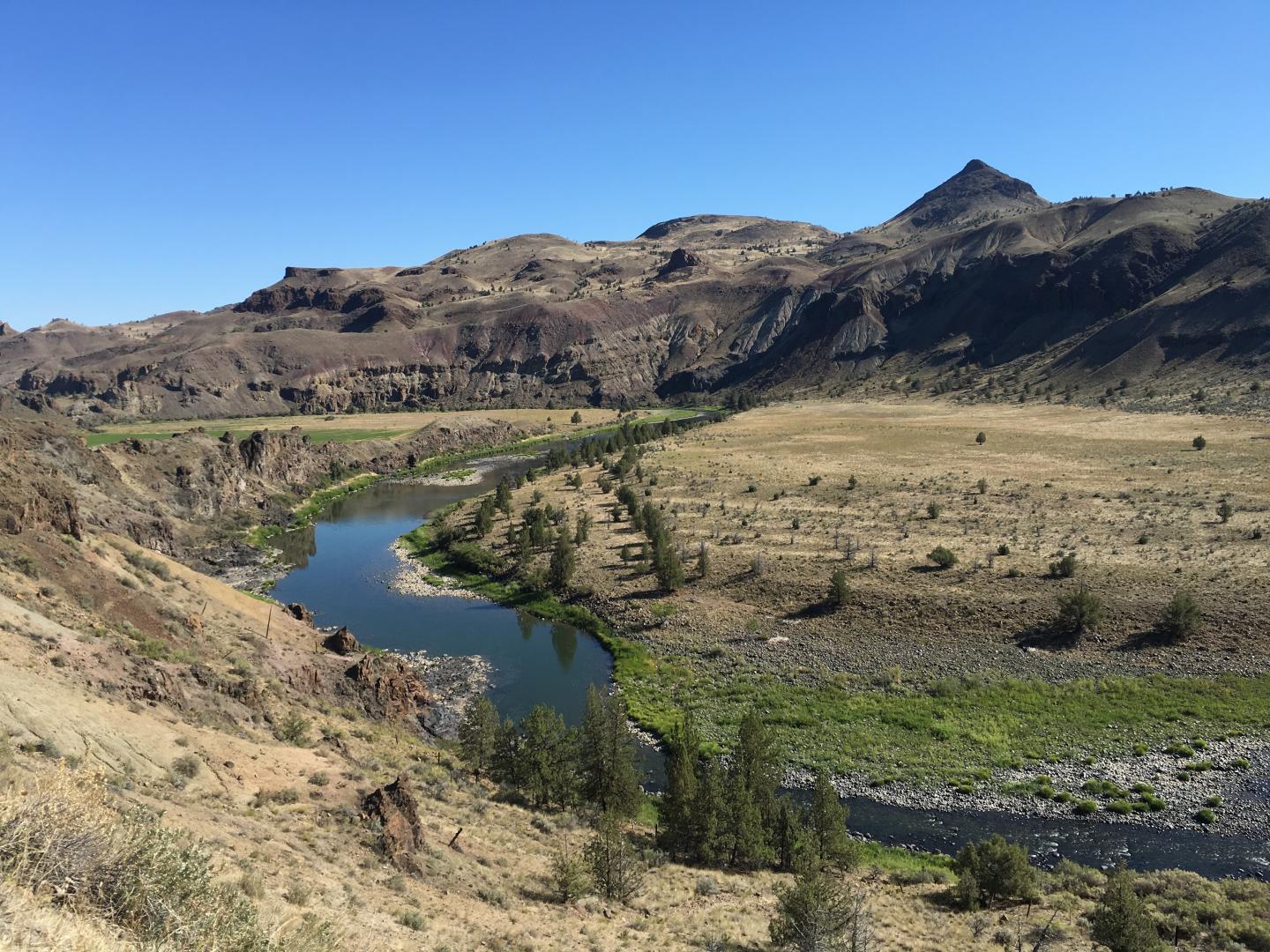 "Climate change is happening. We need tools to try to identify areas that are going to be the most at risk and try to develop plans to conserve these areas," said lead author Lise Comte, a postdoctoral researcher in the UW's School of Aquatic and Fishery Sciences. "It's important to look at the organisms themselves as we cannot just assume they will all be equally sensitive to these changes."

The researchers found that overall, sensitivity to temperature changes varied greatly between ocean-dwelling and freshwater fish. In general, marine fish in the tropics and freshwater fish in higher latitudes of the Northern Hemisphere were the most at risk when water temperatures warmed, the analysis showed.

This figure shows the risk that freshwater fish (top) and marine fish (bottom) could exceed their thermal limits by the year 2070. Blue indicates a low risk and red shows a high risk. 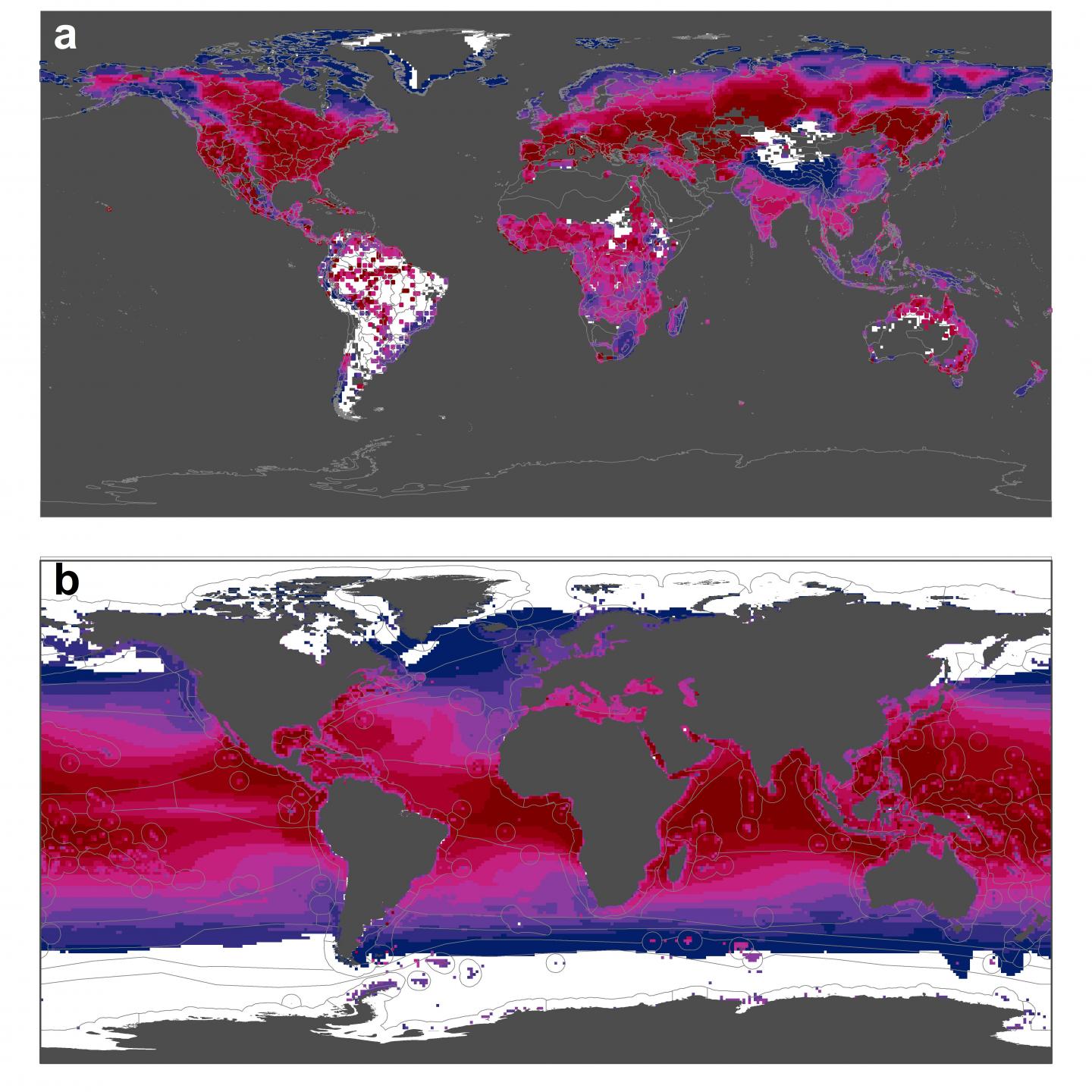 "Nowhere on Earth are fish spared from having to cope with climate change," said senior author Julian Olden, a UW professor of aquatic and fishery sciences. "Fish have unique challenges - they either have to make rapid movements to track their temperature requirements, or they will be forced to adapt quickly."

Using years of data -- and relying on the fact that many fish species are taxonomically related and tend to share the same thermal limits -- the researchers were able to predict the breaking-point temperature for close to 3,000 species. Regional patterns then emerged when those data were paired with climate-model data predicting temperature increases under climate change.

For example, fish in the tropical oceans are already living in water that is approaching the upper range of their tolerance. They might not have much wiggle room when temperatures increase slightly. By contrast, in freshwater streams in the far north, fish are accustomed to cooler water temperatures but have much less tolerance for warming waters. Since the effects of climate change are acutely felt in high latitudes, this doesn't bode well for fish in those streams that have a small window for survivable temperatures.

Fish will either migrate, adapt or die off as temperatures continue to warm, the researchers explained. Given past evolutionary rates of critical thermal limits, it's unlikely that fish will be able to keep up with the rate at which temperatures are increasing, Olden said. The ability to move, then, is imperative for fish that live in the most critical areas identified in this analysis.

Currently, dams and other infrastructure may block fish from getting where they might need to be in the future; fish ladders and other means to allow fish to circumvent these barriers could be more readily used, although the effectiveness of these structures is highly variable.

Additionally, actions to restore vegetation along the edges of streams and lakes can help shade and reduce water temperature for the benefit of fish.

Citation: Climatic vulnerability of the world’s freshwater and marine fishes http://dx.doi.org/10.1038/nclimate3382
on September 14, 2017