"Chunking" or How Squirrels Organize Their Nut Stashes

Like trick-or-treaters sorting their Halloween candy haul, fox squirrels apparently organize their stashes of nuts by variety, quality and possibly even preference, according to new UC Berkeley research.

The study, published today in the Royal Society Open Science journal, is the first to show evidence of squirrels arranging their bounty using "chunking," a cognitive strategy in which humans and other animals organize spatial, linguistic, numeric or other information into smaller more manageable collections, such as subfolders on a computer.

Fox squirrels stockpile at least 3,000 to 10,000 nuts a year and, under certain conditions, separate each cache into quasi "subfolders," one for each type of nut, researchers said.

Eastern fox squirrels on the UC Berkeley campus have been found to organize their nut caches by variety, quality and preference. 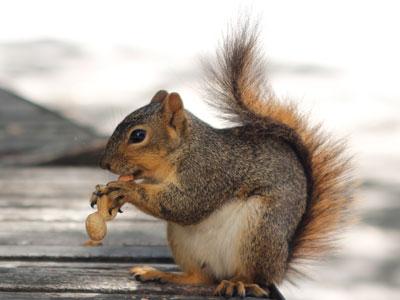 
"This is the first demonstration of chunking in a scatter-hoarding animal, and also suggests that squirrels use flexible strategies to store food depending on how they acquire food," said study lead author Mikel Delgado, a post-doctoral researcher who conducted the study along with UC Berkeley psychology professor Lucia Jacobs.

Presumably, sophisticated caching techniques maximize the squirrels' ability to remember where they've stored their most prized treats while at the same time hiding them from potential pilferers, the researchers said.

"Squirrels may use chunking the same way you put away your groceries. You might put fruit on one shelf and vegetables on another. Then, when you're looking for an onion, you only have to look in one place, not every shelf in the kitchen," said study senior author Jacobs.

Over a two-year period, the research team tracked the caching patterns of 45 male and female fox squirrels as the reddish gray, bushy-tailed rodents buried almonds, pecans, hazelnuts and walnuts in various wooded locations on the UC Berkeley campus.

The study used combinations of locations and nut sequences on various groups of fox squirrels. In one experiment, for example, each of the squirrels were fed 16 nuts, one after another, under two separate conditions: Some were fed at the locale where they had cached the previous nut fed to them while others were fed at one central location, to which they would need to return if they wanted another nut. Researchers gave some squirrels 16 nuts in rows of four, say, almonds followed by pecans, followed by hazelnuts and then walnuts, while others received 16 nuts in random order.

Using hand-held GPS navigators, researchers tracked the squirrels from their starting location to their caching location, then mapped the distribution of nut types and caching locations to detect patterns.

They found that the squirrels who foraged at a single location frequently organized their caches by nut species, returning to, say, the almond area, if that was the type of nut they were gathering, and keeping each category of nut that they buried separate. Meanwhile, the squirrels foraging in multiple locations deliberately avoided caching in areas where they had already buried nuts, rather than organizing nuts by type.

"These observations suggest that when lacking the cognitive anchor of a central food source, fox squirrels utilize a different and perhaps simpler heuristic (problem-solvi