Ancient Amphibian Had Mouthful of Teeth Ready to Grab You

The idea of being bitten by a nearly toothless modern frog or salamander sounds laughable, but their ancient ancestors had a full array of teeth, large fangs and thousands of tiny hook-like structures called denticles on the roofs of their mouths that would snare prey, according to new research by paleontologists at the University of Toronto Mississauga (UTM).

In research published online in a recent issue of PeerJ, an open access journal, Professor Robert Reisz, Distinguished Professor of Paleontology at UTM, explains that the presence of such an extensive field of teeth provides clues to how the intriguing feeding mechanism seen in modern amphibians was also likely used by their ancient ancestors.

The Early Permian dissorophid Cacops displays its fearsome dentition as it preys on the hapless reptile Captorhinus. 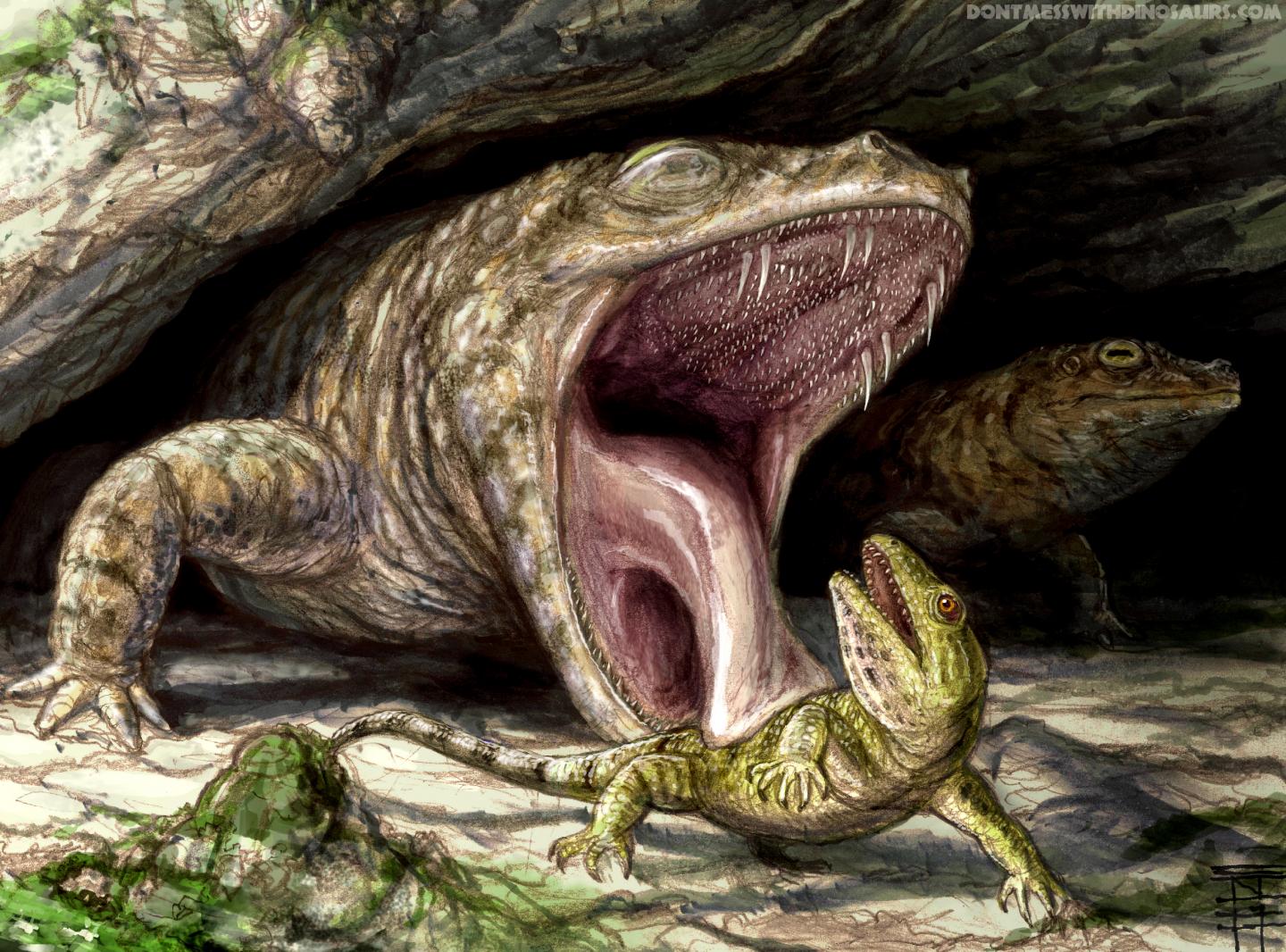 They believe that the tooth-bearing plates "were ideally suited for holding on to prey, such as insects or smaller tetrapods, may have facilitated a method of swallowing prey items via retraction of the eyeballs into the mouth, as some amphibians do today.

In many vertebrates, ranging from fish to early synapsids (ancestors of mammals), denticles are commonly found in dense concentrations on the bones of the hard palate (roof of the mouth). However, in one group of tetrapods, temnospondyls (which are thought to be the ancestors of modern amphibians) these denticles were also found on small, bony plates that filled the large soft part of the palate. The entire roof of the mouth was covered with literally thousands of these tiny teeth that they used to grab prey. Since these toothy plates were suspended in soft tissue, they are often lost or scattered during fossilization.

A thematic diagram showing a cut across the skull showing the position of the denticulate plates that covered the soft palate. On the left is at resting stage, on the right, ventral movement of the soft palate by retraction of the eyeballs, during feeding 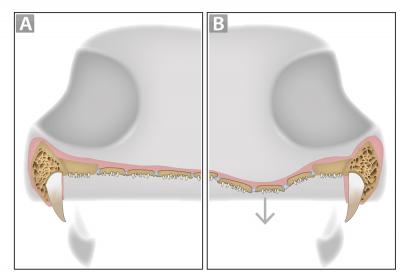 Denticles are significantly smaller than the teeth around the margin of the mouth--on the order of dozens to a couple hundred microns in length. They are actually true teeth, rather than just protrusions in the mouths of these tetrapods, says Reisz and his colleagues, Bryan Gee and Yara Haridy, both graduate students in paleontology.

"Denticles have all of the features of the large teeth that are found on the margin of the mouth," says Reisz. "In examining tetrapod specimens dating back ~289 million years, we discovered that the denticles display essentially all of the main features that are considered to define teeth, including enamel and dentine, pulp cavity and peridontia."

In reaching these conclusions, the researchers analyzed specimens unearthed from the fossil-rich Dolese Brothers Limestone Quarry near Richards Spur, Oklahoma. They were extraordinarily well preserved, making them ideal candidates for study.

This figure 1J-L shows the skull of a small amphibamid dissorophid called Passawioops, with the tiny palatal plates in place, in the roof of the mouth, with two close-ups to the right.

The researchers extracted and isolated the denticle-bearing plates, created thin section slides and examined them under the microscope--no small feat since denticles on this animal were only about 100 microns long.

Reisz and his graduate students suggest that the next big question relates to evolutionary changes to the overall abundance of teeth: if these ancient amphibians had an astonishing number of teeth, why have most modern amphibians reduced or entirely lost their teeth?

The research was funded by the Natural Sciences and Engineering Research Council of Canada.