Imagine you’re on your way to Mars, and you lose a crucial tool during a spacewalk. Not to worry, you’ll simply re-enter your spacecraft and use some microorganisms to convert your urine and exhaled carbon dioxide (CO2) into chemicals to make a new one. That’s one of the ultimate goals of scientists who are developing ways to make long space trips feasible.

Astronauts can’t take a lot of spare parts into space because every extra ounce adds to the cost of fuel needed to escape Earth’s gravity. “If astronauts are going to make journeys that span several years, we’ll need to find a way to reuse and recycle everything they bring with them,” Mark A. Blenner, Ph.D., says. “Atom economy will become really important.”

The solution lies in part with the astronauts themselves, who will constantly generate waste from breathing, eating and using materials. Unlike their friends on Earth, Blenner says, these spacefarers won’t want to throw any waste molecules away. So he and his team are studying how to repurpose these molecules and convert them into products the astronauts need, such as polyesters and nutrients. 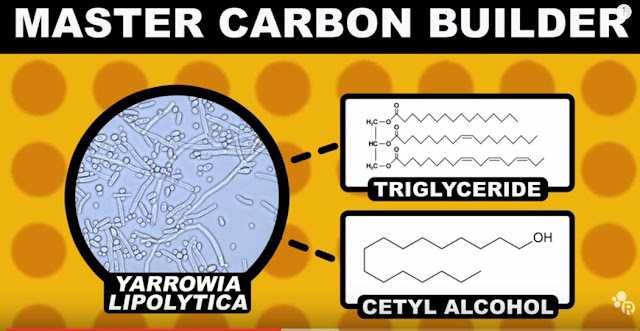 Some essential nutrients, such as omega-3 fatty acids, have a shelf life of just a couple of years, says Blenner, who is at Clemson University. They’ll need to be made en route, beginning a few years after launch, or at the destination. “Having a biological system that astronauts can awaken from a dormant state to start producing what they need, when they need it, is the motivation for our project,” he says.

Blenner’s biological system includes a variety of strains of the yeast Yarrowia lipolytica. These organisms require both nitrogen and carbon to grow. Blenner’s team discovered that the yeast can obtain their nitrogen from urea in untreated urine. Meanwhile, the yeast obtain their carbon from CO2, which could come from astronauts’ exhaled breath, or from the Martian atmosphere. But to use CO2, the yeast require a middleman to “fix” the carbon into a form they can ingest. For this purpose, the yeast rely on photosynthetic cyanobacteria or algae provided by the researchers.

One of the yeast strains produces omega-3 fatty acids, which contribute to heart, eye and brain health. Another strain has been engineered to churn out monomers and link them to make polyester polymers. Those polymers could then be used in a 3-D printer to generate new plastic parts. Blenner’s team is continuing to engineer this yeast strain to produce a variety of monomers that can be polymerized into different types of polyesters with a range of properties.

For now, the engineered yeast strains can produce only small amounts of polyesters or nutrients, but the scientists are working on boosting output. They’re also looking into applications here on Earth, in fish farming and human nutrition. For example, fish raised via aquaculture need to be given omega-3 fatty acid supplements, which could be produced by Blenner’s yeast strains.

Although other research groups are also putting yeast to work, they aren’t taking the same approach. For example, a team from DuPont is already using yeast to make omega-3 fatty acids for aquaculture, but its yeast feed on refined sugar instead of waste products, Blenner says. Meanwhile, two other teams are engineering yeast to make polyesters. However, unlike Blenner’s group, they aren’t engineering the organisms to optimize the type of polyester produced, he says.

Whatever their approach, these researchers are all adding to the body of knowledge about Y. lipolytica, which has been studied much less than, say, the yeast used in beer production. “We’re learning that Y. lipolytica is quite a bit different than other yeast in their genetics and biochemical nature,” Blenner says. “Every new organism has some amount of quirkiness that you have to focus on and understand better.”

Contacts and sources:
The American Chemical Society
on August 23, 2017