The Smell of a Queen

Queen ants spend most of their time having babies. To reign supreme in a colony, they exude a special scent, or pheromone, on the waxy surface of their body that suppresses ovary development in their sisters, rendering the latter reproductively inactive workers that find food, nurse the young and protect the colony.

Now, researchers at the University of California, Riverside (UCR) have begun to unravel the molecular mechanisms behind how ants sense these pheromones and how they control reproduction regulation and other social activities in ant communities. The research, published today in the journal Nature Communications, highlights how ants use olfactory receptors to distinguish between colony members so they can work together in a complex, hierarchical society. The findings could help in the development of new pest management strategies.

A UCR-led team of researchers identified the olfactory receptors ants use to distinguish between colony members so they can work together in a complex, hierarchical society. 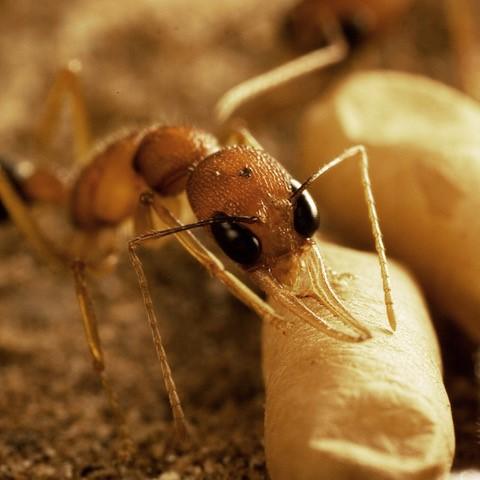 The research team led by Anandasankar Ray, an associate professor in the department of Molecular Cell Systems Biology, has identified and characterized more than 20 receptors found on the antennae of worker ants that play a role in the division of labor within colonies. Among these is one receptor that responds specifically to a pheromone produced by queen ants, an interaction that ultimately results in a physiological change to workers' ovaries.

Ants are eusocial insects, meaning they live in cooperative groups where one female and several males are involved in reproduction, and non-breeding individuals play specialized roles, such as caring for the young, finding food and warding off enemies. For years, scientists have been interested in how ants communicate, which is mediated through a group of hydrocarbon pheromones that ants produce and 'wear' like a coat on their bodies. Through these pheromones, ants can discriminate between nestmates and non-nestmates, and recognize different castes within the same colony.

The effort to unravel the molecular mechanism behind ant olfaction took several years and a consortium of collaborators from several universities. In 2015, Ray's group developed a powerful electrophysiology technique in the Camponotus ant species and showed that sensory neurons within tiny hair-like structures on the ant antennae respond with high specificity to a variety of different ant pheromones. With Ray's help this method was set up and tested at Arizona State University in another ant species, Harpegnathos saltator. However, until now, the olfactory receptors responsible for detecting these hydrocarbon pheromones had not been identified in any species.

In the current paper, Ray's group identified and characterized 22 odorant receptors that interact specifically with hydrocarbon pheromones produced by other ants, including one--called HsOr263--that responds to the queen pheromone. These receptors belong to a subfamily of the odorant receptor gene family called the 9-exon subfamily.

"We explored the 9-exon subfamily of olfactory receptor genes first because it is greatly expanded in ants and other eusocial insects, making it a good place to start looking for receptors that respond to the hydrocarbon pheromones," Ray said.

Accelerating this research, and paving the way for other ant receptors to be identified, was a technique developed in 2014 by Ray and Gregory Pask, a former postdoctoral associate in Ray's lab, to express ant olfactory receptors in a genetically modified Drosophila melanogaster fly. Pask inserted the DNA of ant receptors into the fly genome and used genetics to express the ant receptor in fly antennae.

"Once we expressed an ant receptor in the fly antenna I could directly measure the response to individual hydrocarbons on that receptor one by one," said Pask, lead author of the Nature Communications paper and currently an assistant professor at Bucknell University in Lewisburg, Pa. "Using this method, we then identified odorant receptors for several important hydrocarbons, including ones found on workers, males, or queens."

"Ants and other social insects use a mix of hydrocarbons on their bodies as 'biological barcodes' that communicate key social information within the colony. Our research sheds light on how these 'barcode readers' work at a molecular level," Pask said.

Ray said the identification of ant olfactory receptors provides new insight into the chemical communications systems used by eusocial insects, and future research would explore how these receptors trigger physiological changes, such as the suppression of reproduction.

"Ant olfaction and the way that smell is processed is a fascinating area of neuroscience, but this work also has future practical applications. By increasing our understanding of pheromone-mediated communication, we have great potential to be able to manipulate and control insect behavior, which will lead to new pest management strategies," Ray said.


The title of the paper is: Specialized Odorant Receptors in Social Insects that Detect Cuticular Hydrocarbon Cues and Candidate Pheromones. Other authors are: UCR’s Jocelyn Millar, who synthesized several hydrocarbons for this study; Jesse Slone and Laurence Zwiebel from Vanderbilt University; Shelley Berger from the University of Pennsylvania; Danny Reinberg from New York University School of Medicine; and Jürgen Liebig from Arizona State University. http://dx.doi.org/10.1038/s41467-017-00099-1

Funding for the project was from the Howard Hughes Medical Institute’s Collaborative Innovation Award.


A related paper using Pask’s approach to express ant receptors in fly antennae was used in a follow up study by the Zwiebel Laboratory to look at other receptor subfamilies in the ant genome. Pask and Ray are listed as authors on that paper as well.
on August 18, 2017