Detecting food and cosmetic spoilage and contamination. Identifying new medicinal plants in a remote jungle. Authenticating tea and wine. Scientists have developed a low-cost, portable, paper-based sensor that can potentially carry out all of these functions with easy-to-read results.

“I’ve always been interested in developing technologies that are accessible to both industry and the general population,” Silvana Andreescu, Ph.D., says. “My lab has built a versatile sensing platform that incorporates all the needed reagents for detection in a piece of paper. At the same time, it is adaptable to different targets, including food contaminants, antioxidants and free radicals that indicate spoilage.”

What sets Andreescu’s sensors apart from others, she says, are the nanostructures they use to catch and bind to compounds they’re looking for.

“Most people working on similar sensors use solutions that migrate on channels,” Andreescu says. “We use stable, inorganic particles that are redox active. When they interact with the substances we want to detect, they change color, and the intensity of the change tells us how concentrated the analyte is.”

Additionally, because all of the reagents needed to operate the device are incorporated in the paper, users don’t need to add anything other than the sample being tested.

Smart labels for cosmetics and food could one day tell consumers when to throw a product
out. 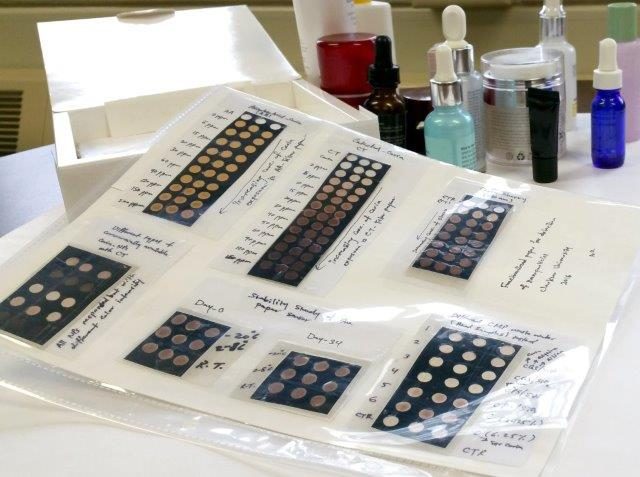 The potential applications are wide-ranging. For example, much of her sensor work thus far has focused on detecting antioxidants in tea and wine. Andreescu, who’s at Clarkson University, and her colleagues have found that these products have unique antioxidant “fingerprints” that could be used for authentication purposes. The portable sensor could also be used by researchers exploring remote locations, such as the Amazon rainforest, in search of natural sources of antioxidants, she notes.

More recently, Andreescu extended her work to root out food contamination and environmental pollutants. One sensor prototype can spot ochratoxin A, a fungal toxin commonly found in a range of products, including cereals and coffee. She says this direction could be expanded further to look for salmonella and E. coli.

Now, her team is taking the work in yet another direction, developing paper-based devices that change color as cosmetics and food go bad. These sensors bind to the reactive oxygen species that products accumulate as they age and eventually spoil. Although testing for this application is still ongoing, Andreescu says this technology could one day be incorporated into smart labels that would tell consumers when to throw a product out.

The fundamental work in Andreescu's lab that enabled the development of this technology was funded by the National Science Foundation.