From smart socks to workout clothes that measure exertion, wearable body sensors are becoming the latest “must-have” technology. Now scientists report they are on the cusp of using silk, one of the world’s most coveted fabrics, to develop a more sensitive and flexible generation of these multi-purpose devices that monitor a slew of body functions in real time.

“There is a whole world of possibilities for silk sensors at the moment. Silk is the ideal material for fabricating sensors that are worn on the body,” Yingying Zhang, Ph.D., says. “One possibility we foresee is for them to be used as an integrated wireless system that would allow doctors to more easily monitor patients remotely so that they can respond to their medical needs more rapidly than ever before.”


Silk could soon be used to produce more sensitive and flexible body sensors like this one. 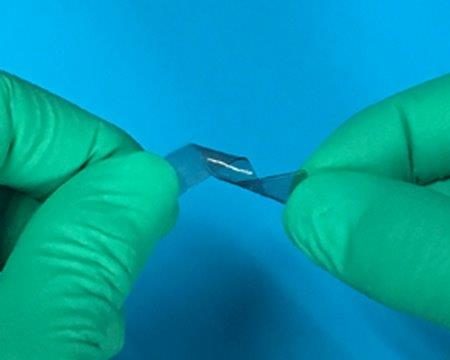 
Body sensors, which are usually made with semiconductors, have shown great potential for monitoring human health. But they have limitations. For instance, strain sensors, which measure changes in force, cannot be highly sensitive and highly stretchable at the same time. Silk, a natural material that is stronger than steel and more flexible than nylon, could overcome these problems. The fiber is also lightweight and biocompatible. However, silk doesn’t conduct electricity very well. To address this challenge, Zhang and colleagues at Tsinghua University in China sought to find a way to boost the conductivity of silk so it could be successfully used in body-sensing devices.

The researchers decided to try two different strategies. In one approach, they treated the silk in an inert gas environment with temperatures ranging from 1,112 degrees to 5,432 degrees Fahrenheit. As a result, the silk became infused with N-doped carbon with some graphitized particles, which is electrically conductive. Using this technique, the scientists have developed strain sensors, pressure sensors and a dual-mode sensor capable of measuring temperature and pressure simultaneously.

In the other approach, the team fed either graphene or carbon nanotubes to silkworms. Some of these nanoparticles were naturally incorporated into the silk produced by the worms. So far, this method hasn’t produced electrically conductive fibers, but the researchers are still experimenting with this technique and are hopeful they can make it work.

Based on the preliminary results, Zhang wants to explore ways to create an integrated set of silk-based, self-sustaining sensors that would be powered by nano-generators. She also suggests that her team’s silk sensors might be used to build more realistic robots that can sense touch, temperature or humidity and can even distinguish between different people’s voices.

Zhang acknowledges funding from the National Natural Science Foundation of China and the Key Technologies Basic Research and Development Program.