Molten lava, volcanic ash, modern grime, salt, humidity. The ancient painting of a Roman woman has been through it all, and it looks like it. Scientists now report that a new type of high-resolution X-ray technology is helping them discover just how stunning the original portrait once was, element-by-element. The technique could help conservators more precisely restore this image, as well as other ancient artworks.

“Science is allowing us to get closer to the people who lived in Herculaneum,” says Eleonora Del Federico, Ph.D. “By unraveling the details of wall paintings that are no longer visible to the naked eye, we are in essence bringing these ancient people back to life. And learning more about the materials and techniques they used will help us to better preserve this artistry for future generations.”

An iron element map (right) made with new X-ray technology reveals the underlying craftsmanship hidden beneath a damaged portrait of a Roman woman (left). 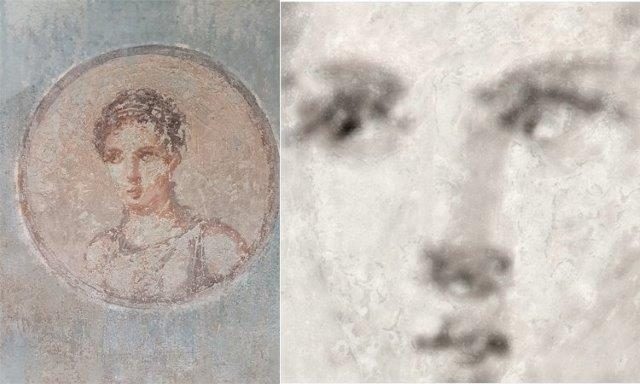 Herculaneum was an ancient Roman resort town near modern-day Naples on the Italian coast. The city, along with nearby Pompeii, was destroyed during an eruption of Mount Vesuvius in 79 A.D. For centuries, Herculaneum was buried under 66 feet of volcanic material, which helped preserve much of the artwork in the city. Ironically, it was only when Herculaneum was rediscovered and excavation began in the mid-19th century that many of the paintings, frescos and statues started to deteriorate. Humidity, temperature variations, salt and other atmospheric agents have done most of the damage. The portrait of the young woman, for instance, was only excavated about 70 years ago. Del Federico, who is at Pratt Institute’s School of Liberal Arts and Sciences, speculates that when it was first uncovered, the image was probably stunning. But she says just a few decades of exposure to the elements has wrought incalculable damage to it.

To help scientists involved with the Herculaneum Conservation Project better understand what they need to do to preserve this artwork, Del Federico and colleagues at the Pratt Institute and XGLab SRL sought to find out more about the wall paintings hidden beneath accumulating layers of crystalized salt and muck.

In one of the first-of-its-kind field studies, the researchers used a recently developed portable macro X-ray fluorescence (macro XRF) instrument, ELIO by XGLab SRL, to scan and analyze a painting of a young woman in the ancient city. This new instrument allows scientists to noninvasively analyze a painting without having to move it or have the device come into contact with the artwork. ELIO can produce maps of the elements, such as iron, lead and copper, in the painting. Del Federico says these insights could help conservators choose cleaning solvents that are compatible with the elements in a painting and possibly allow much of its original magnificence to be restored.

After she used the method, Del Federico was surprised at how much detail it uncovered. The analysis revealed that the artist had sketched the young woman with an iron-based pigment and then highlighted around her eyes with a lead pigment. High levels of potassium in her cheeks suggested that green earth pigment was used as an underpainting to help create a “flesh” color. But the analysis also revealed much more.

“This young woman is gone forever, but our study has revealed in remarkable detail her humanity, her thoughtful expression and her beauty,” Del Federico says.

This research was done in conjunction with the Herculaneum Conservation Project. Del Federico acknowledges funding from the Alfred P. Sloan Foundation, the Camille & Henry Dreyfus Foundation, the Stockman Family Foundation and the Izchak Friedman Endowed Scholarship.
The researchers presented their results  at the 254th National Meeting & Exposition of the American Chemical Society (ACS). ACS, the world’s largest scientific society, is holding the meeting here through Thursday. It features nearly 9,400 presentations on a wide range of science topics.