New research published this week shows a rare state of matter in which electrons in a superconducting crystal organize collectively. The findings lay the groundwork for answering one of the most compelling questions in physics: How do correlated electron systems work, and are they related to one another?

The paper, Electronic in-plane symmetry breaking at field-tuned quantum criticality in CeRhIn5, was published in the journal Nature.

Electrons in most metals act individually, free to move through a metal to conduct electric currents and heat. But in a special sample of layered cerium, rhodium and indium (CeRhIn5), scientists discovered that electrons unite to flow in the same direction (a behavior called "breaking symmetry") when in high magnetic fields of 30 tesla. Known as "electronic nematic," this is a rare state of matter between liquid and crystal.

Crystalline samples of CeRhIn5 from Los Alamos were cut into microscopic, crystalline conducting paths with a focused ion beam at MPI-CPfS.

"It's sort of like in ancient times," clarifies Phillip Moll, principal investigator of this work and leader of the Physics of Microstructured Quantum Matter Group at the Max-Planck Institute for Chemical Physics of Solids in Germany. "People would draw maps in whatever direction best served them. But this state is like the moment when the world's mapmakers unified to arbitrarily pick north as the orientation for all maps."

Scientists believe that the electronic nematicity state may be closely related to superconductivity, another strongly correlated electron state in which electrons flow with no resistance. This cerium crystal becomes a superconductor under high pressure. However, when placed in a high magnetic field, it demonstrates this electronic nematic state. Because it exhibits both behaviors, CeRhIn5 appears uniquely positioned to one-way reveal possible interactions between these two correlated electron phases.

"This fundamental question in materials in which the electrons interact was the starting point for my PhD thesis," adds Maja Bachmann, a doctoral student on the research team. "Do the electrons have to decide either to pair or to all go in one direction? In other words, are superconductivity and nematicity competitive phenomena, or could the same interaction that leads to pairing also create nematicity?"

Crystalline samples of CeRhIn5 from Los Alamos were cut into microscopic, crystalline conducting paths with a focused ion beam at MPI-CPfS. 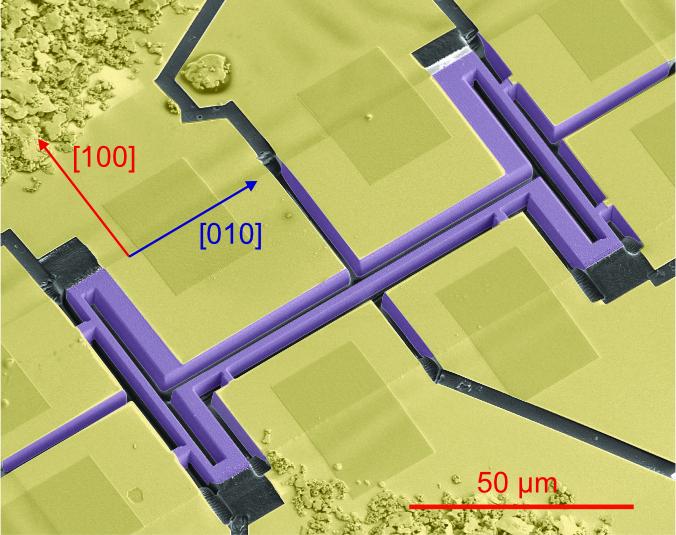 This research featured a specialized sample fabricated from a single crystal of CeRhIn5 using focused ion beam (FIB) machining, and required experiments in both pulsed and resistive magnets. Work in the DC Field Facility's 45-tesla hybrid showed that the nematic phase appears in very high fields, beginning at 30 tesla and remaining through the hybrid's full field. Researchers wanted to understand how far this phase extended and, through experiments at the Pulsed Field Facility, found that at around 50 tesla, the nematicity vanishes, possibly even undergoing another exotic phase transition. .

But something else happened during the pulsed experiments: Researchers noticed that they could control the direction of the electrons when they tilted the field slightly. Returning back to the DC Field Facility, the scientists were able to continuously change this tilt angle while keeping the field steady at 45 tesla, a unique experimental parameter at the MagLab.

"One big advantage of the MagLab is that it offers all the state-of-the-art magnet technologies, and throughout a project, the magnet type can be changed easily if it becomes clear that a different technology was required," Moll said. "Really, the close technological, scientific and administrative integration of these very different but complementary high-field technologies was the key to this success, and is a major strength of the MagLab."

Moll's team performed additional work in the lab's 100-tesla pulsed magnet that will be featured in a future paper. The researchers are continuing to explore how the nematic phase merges into the superconducting phase, part of an ongoing project that will involve additional MagLab experiments.