New Test Detects Antibiotic Resistance in Minutes Instead of Days

Researchers from Uppsala University have developed a new method to quickly determine whether an infection is caused by bacteria that are resistant or sensitive to antibiotics.

Antibiotic resistance is a growing medical problem that threatens human health globally. An important contributing factor to the development of resistance is the use of wrong antibiotics during treatment. Reliable methods to quickly and easily identify the bacterial resistance pattern and put in the right treatment from the beginning, that is, already at the doctor's visit, is a solution to the problem. This has not been possible until now because the existing antibiotic resistance tests take too long. Now, researchers at Uppsala have shown for the first time that it is possible to develop an antibiotic resistance test that is so fast that you can bring the right antibiotic home from the health center at the first visit. The test is primarily intended for urinary tract infection,

Klebsiella pneumoniae bacteria that grow in a microflow chip shot in phase contrast. The bacteria are 0.003mm long and divide every half an hour. 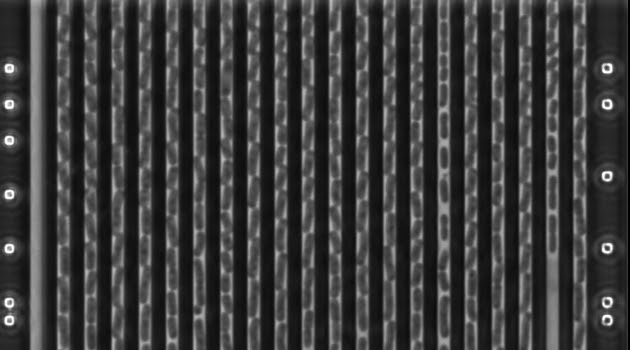 "We have developed a new method that allows a determination of bacterial resistance patterns in urinary tract infections of 10 to 30 minutes. By comparison, the resistance determination currently in force requires 1 to 2 days. The rapid test is based on a new microflow plastic chip where the bacteria are captured and growing, as well as methods for analyzing bacterial growth at the single-cell level, "says Özden Baltekin, a doctoral student who performed most of the experimental work.

The method is very sensitive and is based on techniques developed to study the behavior of individual bacteria with very high sensitivity. By following if the cells grow in the presence of antibiotics (ie they are resistant) or not (they are sensitive) you can say within a few minutes whether they are resistant or sensitive.

"It's super cool that the basic research methods we developed for completely other issues can benefit from such an extremely important medical application," says Johan Elf, one of the researchers behind the study.

The detection method is now being developed into a user-friendly product of a company in Uppsala, Astrego AB. The company expects to have an automated test for urinary tract infections already in a couple of years.

"The hope is that the method in the future can be used in hospitals and health centers to quickly provide correct treatment and, in addition, reduce the unnecessary use of antibiotics," says Dan Andersson, one of the researchers behind the study. In addition, we believe that the method can also be used in other types of infections, such as blood infections where a fast and correct choice of antibiotics is vital to the patient.

The research has been funded by the Swedish Research Council, Knut and Alice Wallenberg Foundation and the European Research Council, ERC. It takes place within the framework of the newly established National Center for Research on Antibiotics Resistance at Uppsala University, UAC (Uppsala Antibiotic Center).