A previously unrecognized 132 million-year-old fossilized sea monster from northern Germany has been identified by an international team of researchers. Findings published in the Journal of Vertebrate Paleontology.

The bizarre sea creature was a plesiosaur, an extinct long-necked aquatic reptile resembling the popular image of the Loch Ness monster, which dominated the seas during the Age of Dinosaurs.

The remains of the eight-meter-long skeleton were collected in 1964 by private fossil collectors. The perfectly preserved bones were rescued from heavy machinery excavating a clay-pit at Sarstedt near Hannover. 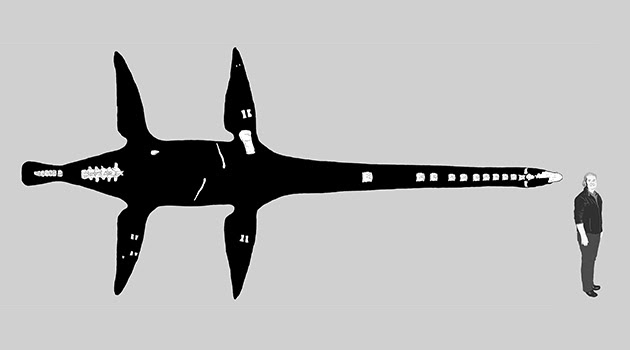 Despite being discovered nearly half a century ago, a group of international scientists was only recently invited to study the specimen by the Lower Saxony State Museum in Hannover. “It was an honor to be asked to research the mysterious Sarstedt plesiosaur skeleton” says Sven Sachs from the Natural History Museum in Bielefeld, Germany, and lead author on the study. “It has been one of the hidden jewels of the museum, and even more importantly, has turned out to be new to science”.

The new plesiosaur was christened Lagenanectes richterae, literally meaning ‘Lagena swimmer’, after the medieval German name for the Leine River near Sarstedt. The species was named for Dr Annette Richter, Chief Curator of Natural Sciences at the Lower Saxony State Museum, who facilitated documentation of the fossil. 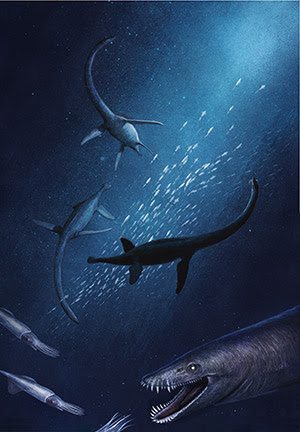 The skeleton of Lagenanectes includes most of the skull, which had a meshwork of long fang-like teeth, together with vertebrae, ribs and bones from the four flipper-like limbs.

“The jaws had some especially unusual features.” says Dr Jahn Hornung a palaeontologist based in Hamburg and co-author on the paper. “Its broad chin was expanded into a massive jutting crest, and its lower teeth stuck out sideways. These probably served to trap small fish and squid that were then swallowed whole”.

Internal channels in the upper jaws might have housed nerves linked to pressure receptors or electroreceptors on the outside of the snout that would have helped Lagenanectes to locate its prey.

The bones also showed evidence of chronic bacterial infection suggesting that the animal had suffered from a long-term disease that perhaps eventually claimed its life. 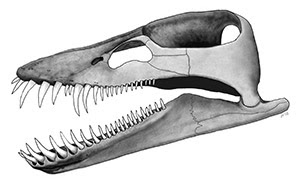 “The most important aspect of this new plesiosaur is that it is amongst the oldest of its kind” says Dr Benjamin Kear from the Museum of Evolution at Uppsala University in Sweden and senior author on the study. “It is one of the earliest elasmosaurs, an extremely successful group of globally distributed plesiosaurs that seem to have had their evolutionary origins in the seas that once inundated Western Europe”.

Elasmosaurs had spectacularly long necks – the longest of any vertebrate – including up to 75 individual vertebrae. Not all of the neck vertebrae of Lagenanectes were recovered but it is estimated that around 40 or 50 must have originally been present.

The skull of Lagenanectes will be displayed as a centerpiece in the ‘Water Worlds’ exhibition at the Lower Saxony State Museum in Hannover.