An international team of archaeological scientists have put an end to the more than half-a-century old claim about the earliest copper smelting event at the Late Neolithic site of Çatalhöyük in central Turkey - one of the world's best-studied prehistoric archaeological sites.

Çatalhöyük is located overlooking the Konya Plain, southeast of the present-day city of Konya (ancient Iconium) in Turkey, approximately 140 km (87 mi) from the twin-coned volcano of Mount Hasan. The eastern settlement forms a mound which would have risen about 20 m (66 ft) above the plain at the time of the latest Neolithic occupation. There is also a smaller settlement mound to the west and a Byzantine settlement a few hundred meters to the east. The prehistoric mound settlements were abandoned before the Bronze Age. A channel of the Çarşamba river once flowed between the two mounds, and the settlement was built on alluvial clay which may have been favourable for early agriculture.

Scholars have been hotly debating the origins and spread of metallurgy for decades, mainly due to the relationship this technology had with the rise of social complexity and economy of the world's first civilizations in the Near East.

Wall painting of a bull, deer and man from Çatalhöyük; 6th millennium BC; reconstruction in their original positions of the bull's heads and the human relief-figure; Museum of Anatolian Civilizations, Ankara, Turkey


Whether metallurgy was such an exceptional skill to have only been invented once or repeatedly at different locations is therefore still contentious. The proponents of the latter have just provided conclusive evidence of the incidental nature of what was held to be the key find for the single origin of metallurgy claim.

Published today in the Journal of Archaeological Science, the re-examination of a c. 8,500-year-old by-product from metal smelting, or 'slag', from the site of Çatalhöyük presents the conclusive reconstruction of events that led to the firing of a small handful of green copper minerals.

"From the beginning of our study it was clear that the small handful of 'slag' samples were only semi-baked. This indicated a non-intentional, or accidental copper firing event, but the 'eureka' moment of how and why that happened arrived quite late", says Dr Miljana Radivojevic, lead author and researcher at the McDonald Institute for Archaeological Research at the University of Cambridge.

Çatalhöyük at the time of the first excavations.

"The co-authors had a lengthy debate about why the semi-baked copper minerals were deposited in a burial, but then when our pigment specialist (Camurcuo?lu) mentioned earlier examples of green and blue copper pigments in graves and our excavation specialist (Farid) reported firing events that charred bones and materials in the shallow graves, the penny started to drop'', she explains.

"The native copper artefacts from the site of Çatalhöyük were not chemically related to this non-intentionally produced metallurgical slag sample", adds Professor Ernst Pernicka, of the University of Heidelberg, further strengthening the claim these authors elaborated in the article. 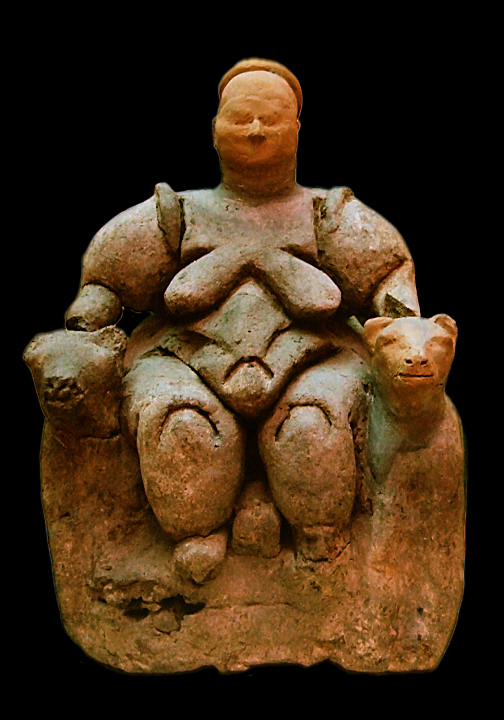 Professor Thilo Rehren, of the UCL Institute of Archaeology, explains the significance of these results: "The invention of metallurgy is foundational for all modern cultures, and clearly happened repeatedly in different places across the globe. As we have seen, not every piece of semi-molten black and green stuff from an excavation is necessarily metallurgical slag. Only materials science methods, in combination with good archaeological records, can distinguish between debris from intentional metal smelting and accidental waste from a destructive fire".

"It has been a long journey for the materials now identified as vitrified copper minerals to be recognised as once important solely for their colour properties, and we can finally put this debate to rest", comments Professor Ian Hodder, from Stanford University, who has been directing the excavations of Çatalhöyük for the past 25 years.

Contacts and sources:
Miljana Radivojevic
University of Cambridge
on August 16, 2017