Walk along a beach or pier in summer or fall and, if you're lucky, you may spot a comb jelly or two in the shallows. The luminescent drifters are named for the eight rows of shimmering combs that line their translucent bodies.

The teeth of these combs are tiny vibrating hairs that propel the creatures through the water. At night, comb jellies glow bright green or flash eerie blue light when disturbed by boaters or swimmers. Like fireflies on land, they produce their otherworldly glow by a chemical reaction involving a light-emitting enzyme.

Comb jellies aren't true jellyfish. They don't have, or need, the stinging tentacles of bell-shaped jellies.

One of the largest ctenophores, this deep-sea species is the size of an American football. 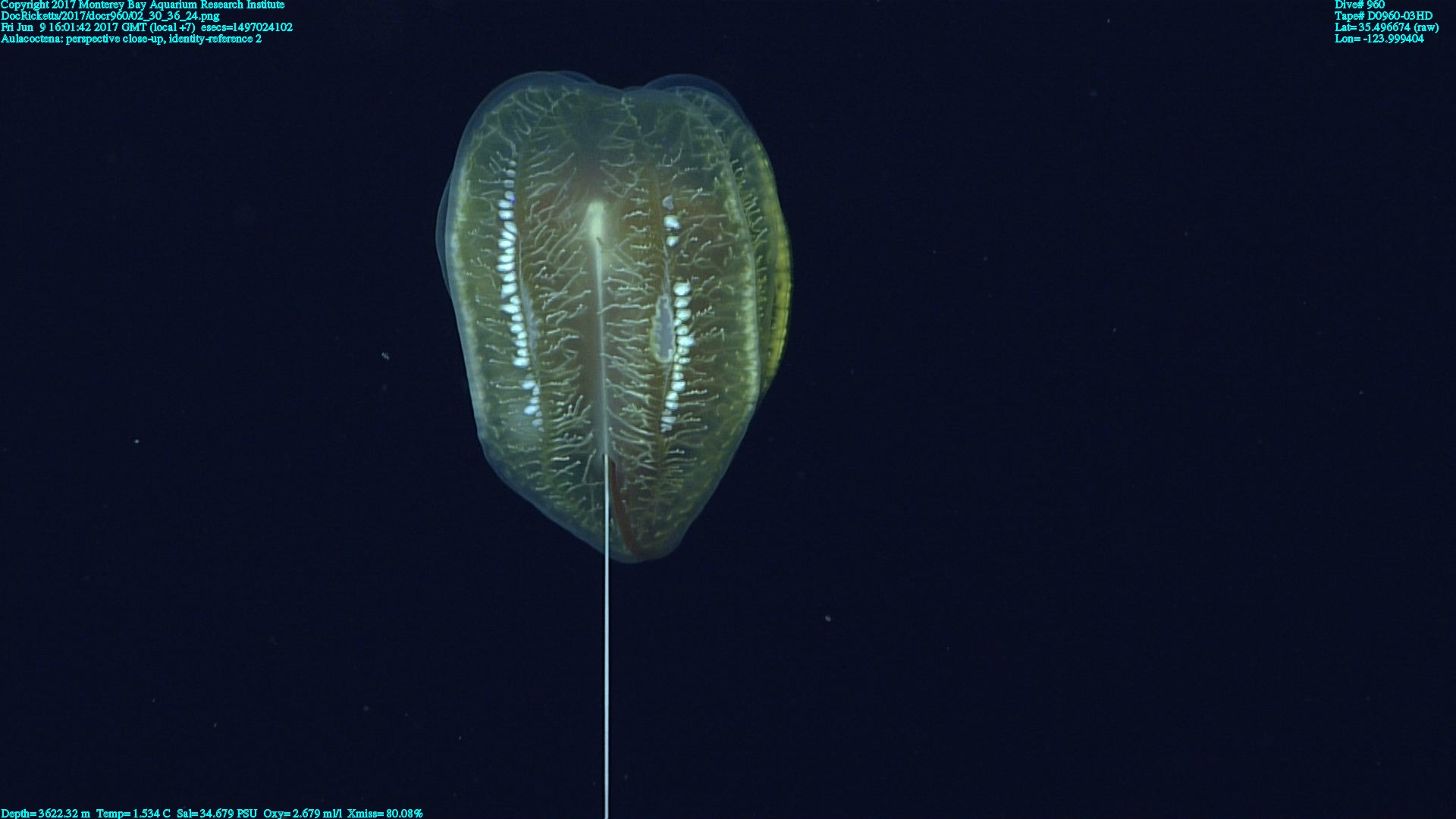 
They use adhesive cells to snare prey, ingesting whatever small creatures they come into contact with as they float along. Vacuum cleaners of the sea, swarms of comb jellies can devour whole patches of freshly spawned fish eggs in a matter of hours.

Comb jellies, also known as ctenophores (pronounced teen'-oh-fours), are marine predators found in all oceans, living in both shallow and deep waters.

How do they exist in the deepest ocean realms? Through a grant from the National Science Foundation's (NSF) Dimensions of Biodiversity program, marine scientists Steven Haddock of the Monterey Bay Aquarium Research Institute, Joseph Ryan of the University of Florida and Erik Thuesen of Evergreen State College are finding out.

The researchers' objectives are to understand ctenophore evolution and diversification using the newest molecular biology techniques, and to investigate the deep sea as a generating force of new adaptations in comb jellies.

Found only in shallow waters, this ctenophore swims with wings spread like those of a biplane. 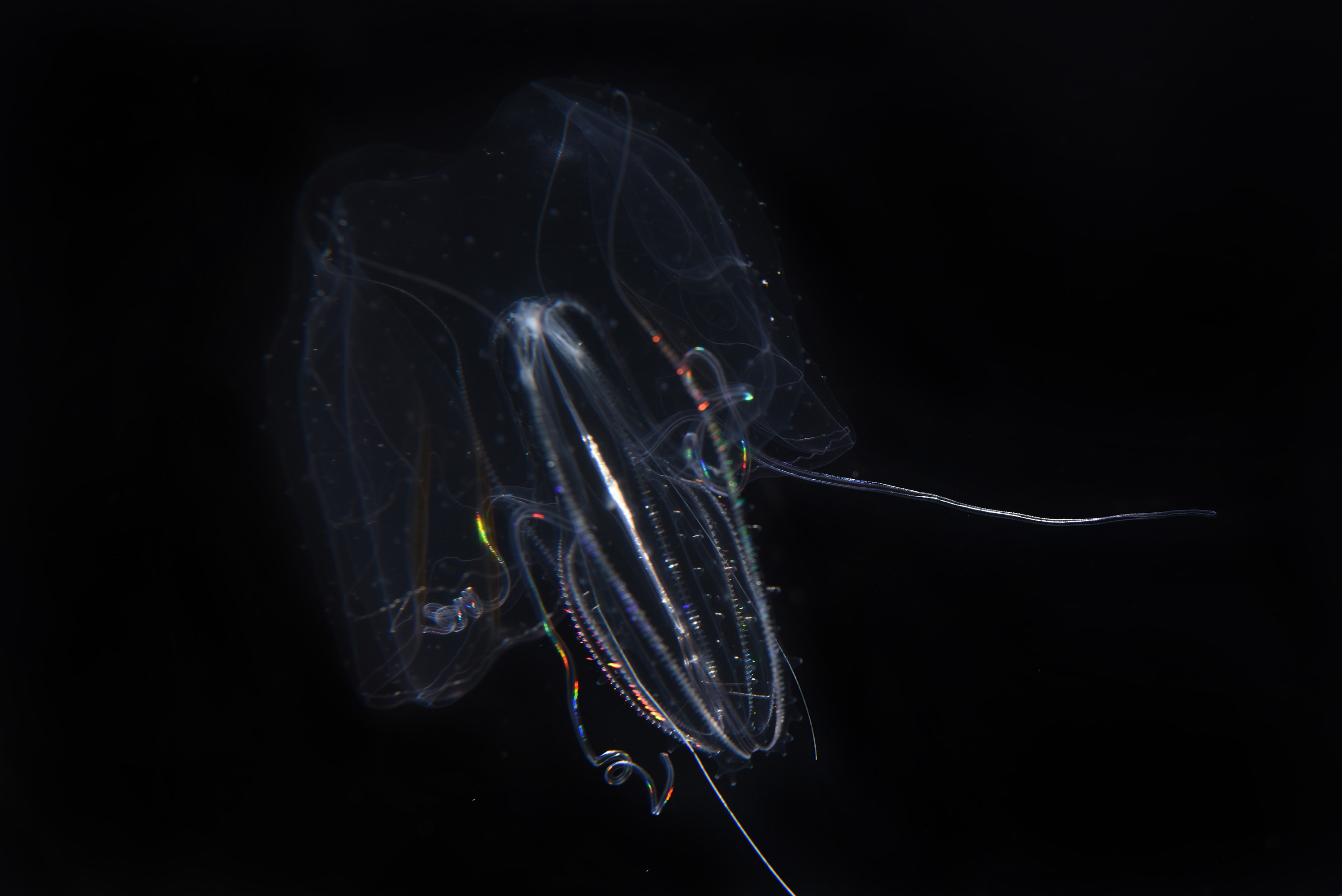 "A variety of ocean animals have evolved what might be called a 'gelatinous lifestyle,'" says Mike Sieracki, Dimensions of Biodiversity program director in NSF's Division of Ocean Sciences, which, along with NSF's Division of Environmental Biology, funds the ctenophore research. "Comb jellies live throughout the seas. It's important to know how diverse they are and how they have adapted to the extreme pressures of the deep ocean."

Adds Haddock, "The deep sea represents more than 90 percent of the inhabitable space on Earth, yet life there is largely a mystery to science."


This shallow-living comb jelly "flaps its wings" to escape predators. 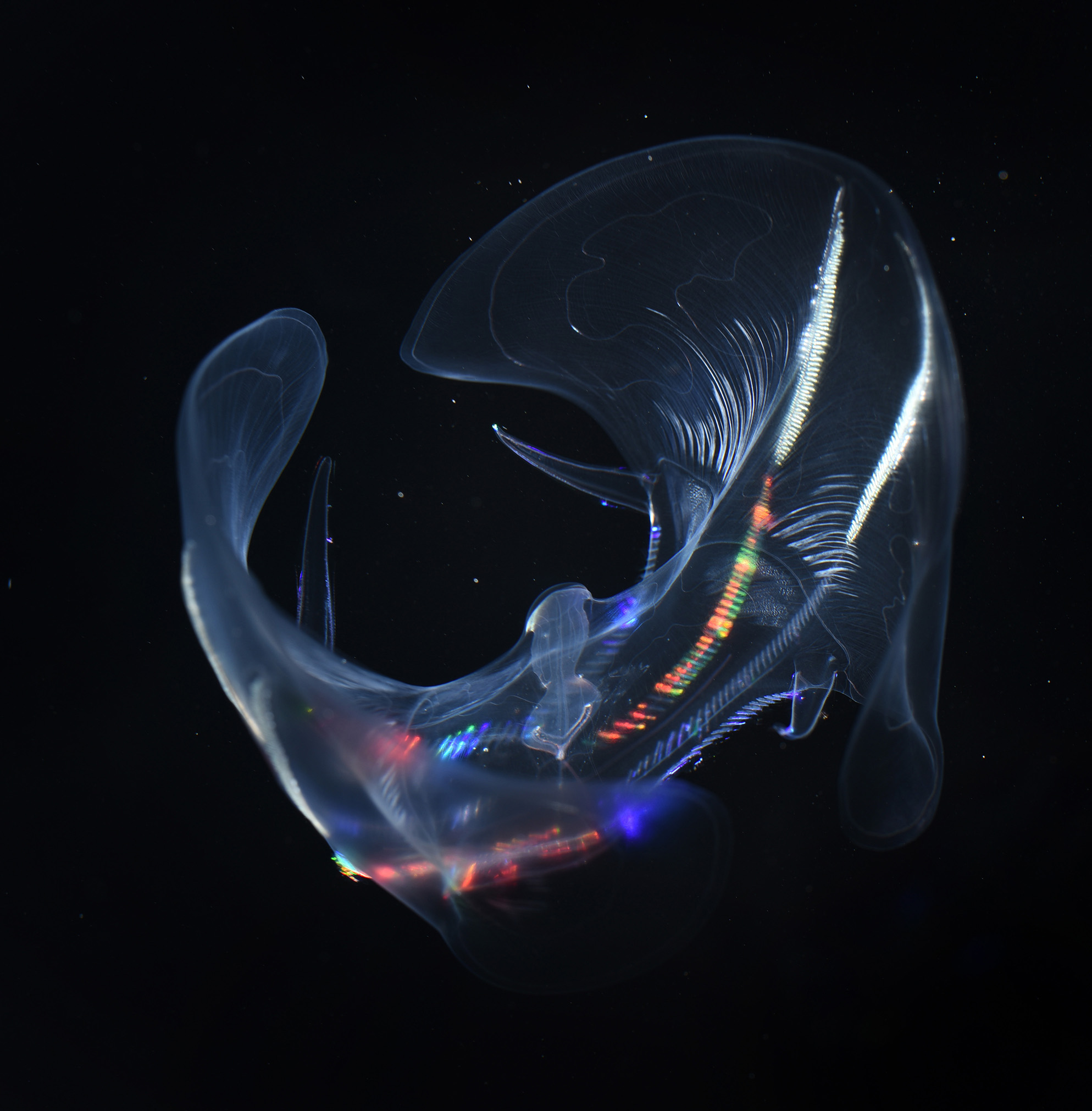 Although fragile and difficult to study, ctenophores are important, says Haddock, in part because they may have been the first animals to split off from all other organisms during evolution, even before sponges and true jellyfish.

Over eons, many shallow-water marine organisms have shifted their home ranges to and from the deep sea despite the differences between these habitats, including light availability, temperature and pressure. Such habitat shifts required dramatic genetic and physiological changes.

Relationships among comb jelly species indicate that at least five such transitions have occurred, with some ctenophores staying in shallow waters and others evolving to thrive in the deep sea, Haddock says.


From the shallows to the depths

Using scuba expeditions in surface waters and remotely operated submersibles in the deep sea, the researchers are collecting samples from shallow water and deep-sea habitats to measure ctenophores' physiological capabilities and to sequence their genomes.

"The project is looking at closely related deep and shallow ctenophore species at biochemical, physiological and genetic levels," says Haddock. "We're beginning to answer questions about the mechanisms of these animals' evolution, and are developing tools for analyzing ctenophore genome datasets."

Adds Ryan, "We've identified a set of genes present in all ctenophores, except for a group that lacks tentacles. Tentacle genes are especially important since that's where ctenophores store most of their stem cells."

The scientists are developing new ways of examining the genetics that underlie ctenophores' physiological tolerances and adaptations. For example, says Thuesen, "the deep sea is capable of squishing the structure of some proteins, so we're investigating how ctenophore proteins function in high pressures."

The results will help scientists understand how animals adapt to life in extreme environments.

While the researchers find answers, look for luminescent creatures that twirl in the shallows, flashing their comb plates like underwater flamenco dancers.