Asteroid Florence, a large near-Earth asteroid, will pass safely by Earth on Sept. 1, 2017, at a distance of about 4.4 million miles, (7.0 million kilometers, or about 18 Earth-Moon distances). Florence is among the largest near-Earth asteroids that are several miles in size; measurements from NASA's Spitzer Space Telescope and NEOWISE mission indicate it’s about 2.7 miles (4.4 kilometers) in size.

“While many known asteroids have passed by closer to Earth than Florence will on September 1, all of those were estimated to be smaller,” said Paul Chodas, manager of NASA’s Center for Near-Earth Object Studies (CNEOS) at the agency's Jet Propulsion Laboratory in Pasadena, California. “Florence is the largest asteroid to pass by our planet this close since the NASA program to detect and track near-Earth asteroids began.”

Asteroid Florence, a large near-Earth asteroid, will pass safely by Earth on Sept. 1, 2017, at a distance of about 4.4 million miles. 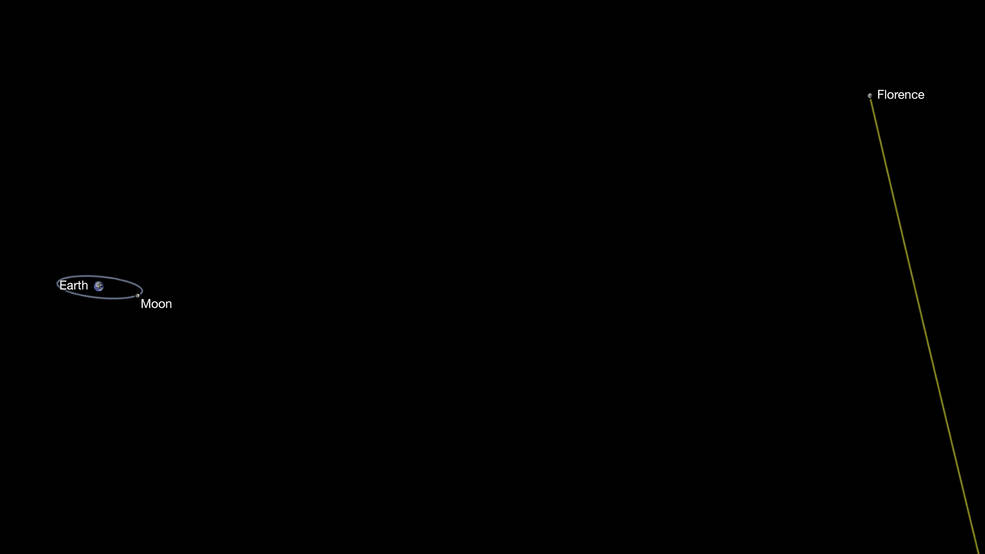 This relatively close encounter provides an opportunity for scientists to study this asteroid up close. Florence is expected to be an excellent target for ground-based radar observations. Radar imaging is planned at NASA's Goldstone Solar System Radar in California and at the National Science Foundation's Arecibo Observatory in Puerto Rico. The resulting radar images will show the real size of Florence and also could reveal surface details as small as about 30 feet (10 meters).

Asteroid Florence was discovered by Schelte "Bobby" Bus at Siding Spring Observatory in Australia in March 1981. It is named in honor of Florence Nightingale (1820-1910), the founder of modern nursing. The 2017 encounter is the closest by this asteroid since 1890 and the closest it will ever be until after 2500. Florence will brighten to ninth magnitude in late August and early September, when it will be visible in small telescopes for several nights as it moves through the constellations Piscis Austrinus, Capricornus, Aquarius and Delphinus.

Radar has been used to observe hundreds of asteroids. When these small, natural remnants of the formation of the solar system pass relatively close to Earth, deep space radar is a powerful technique for studying their sizes, shapes, rotation, surface features and roughness, and for more precise determination of their orbital path.


More information about asteroids and near-Earth objects can be found at:
https://cneos.jpl.nasa.gov
https://www.jpl.nasa.gov/asteroidwatch