The GPM satellite measured rainfall in Hurricane Harvey on Aug. 25, at 7:50 a.m. CDT (1150 UTC) and found that intense storms in the eastern side were dropping rain at a rate greater than 3.2 inches (82 mm) per hour. Tallest storms near the Texas and Louisiana borders reached an altitude of over 10.3 miles (16.6 km).
Credit: NASA/JAXA, Hal Pierce

NASA's Integrated Multi-satellitE Retrievals for GPM or IMERG product is used to make estimates of precipitation from a combination of space-borne passive microwave sensors, including the GMI microwave sensor onboard the Global Precipitation Measurement satellite GPM core satellite, and geostationary IR (infrared) data.

GPM saw Harvey's rainfall pattern was highly asymmetric with the bulk of the rain located north and east of the center on Aug. 27. A broad area of moderate rain (green areas) can be seen stretching from near Galveston Bay to north of Houston and back well to the west. Within this are embedded areas of heavy rain (red areas); the peak estimated rain rate from GPM at the time of this overpass was 96 mm/hour (~3.77 inches per hour). 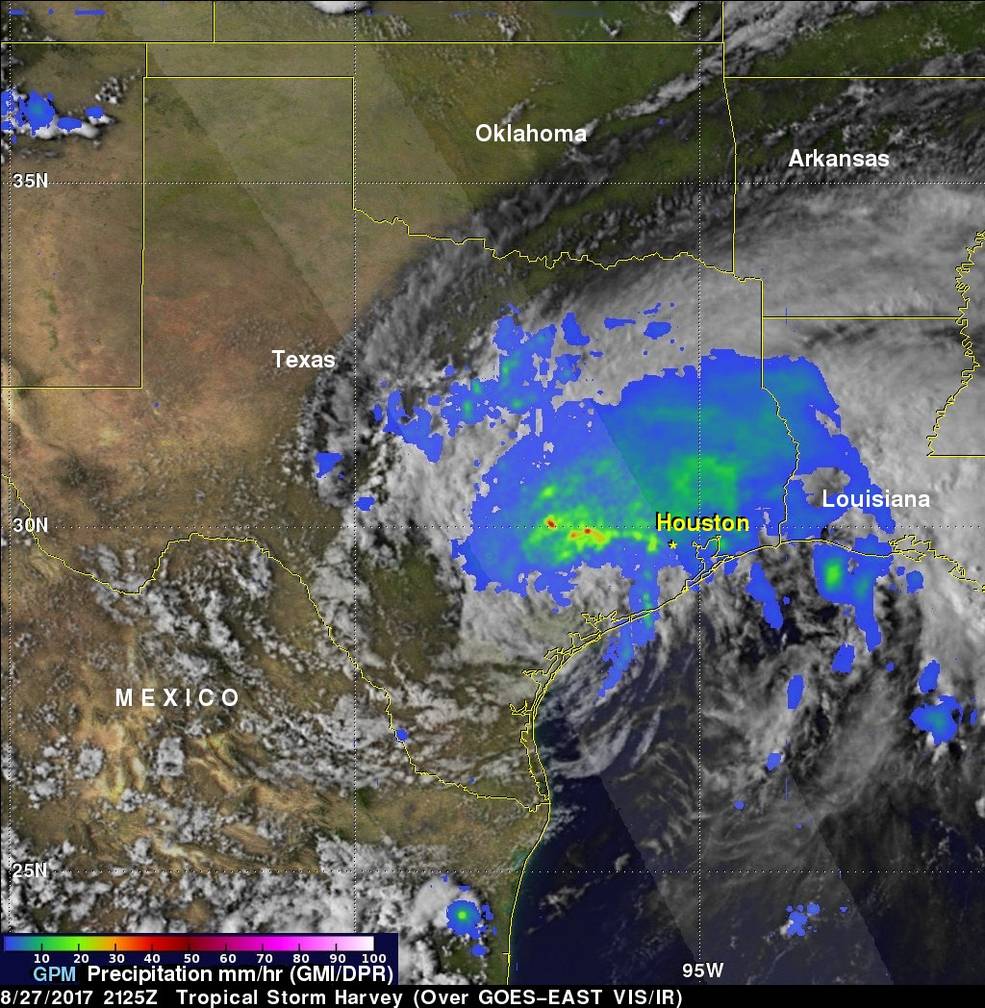 IMERG rainfall estimates for the period 21 to 28 August 2017 showed the accumulated effects of all of the rain from Harvey to date. So far, IMERG shows rainfall totals have reached on the order of 20 inches from the coast near Galveston Bay to in and around the Houston area as a result of the near continuous stream of showers and rain being drawn over the coast in rainbands on the eastern side of Harvey's counter clockwise cyclonic circulation. Elsewhere, at least 10 inches were calculated to have fallen from western Louisiana all the way to near Corpus Christi on the coast.

The result has been widespread, massive flooding across the region and brings back memories of Tropical Storm Allison, which dropped up to 40 inches of rain in Texas back in 2001 and caused devasting flooding in the Houston area.

NASA's IMERG rainfall analysis for Tropical Storm Harvey covers the period from Aug. 21 through Aug. 28, 2017. IMERG shows rainfall totals to 20 inches (purple shading) from the coast near Galveston Bay to in and around the Houston area. At least 10 inches (red shading) are shown to have fallen from western Louisiana all the way to near Corpus Christi on the coast. 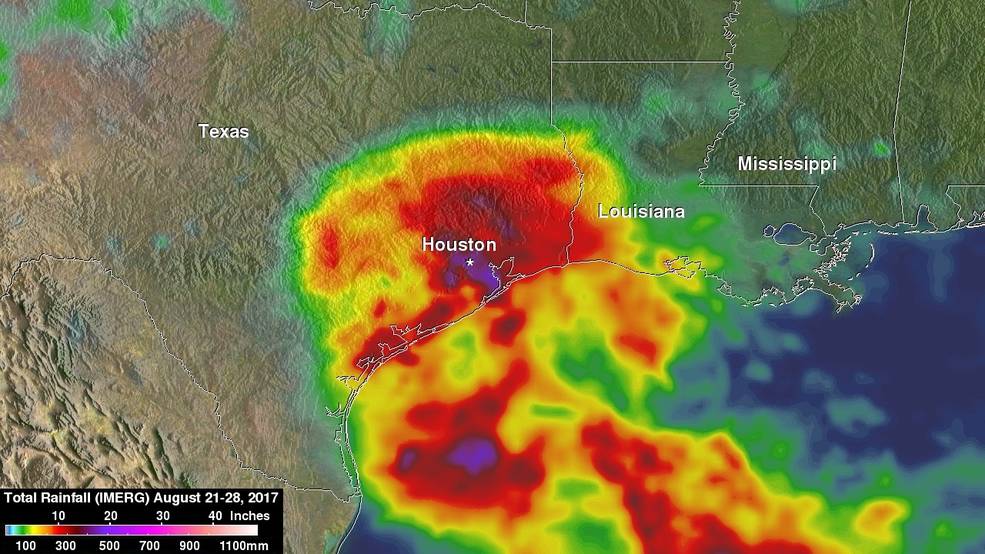 The National Hurricane Center (NHC) noted at 1 p.m. CDT on Aug. 28, "Harvey is expected to produce additional rainfall accumulations of 15 to 25 inches through Friday over the upper Texas coast and into southwestern Louisiana. Isolated storm totals may reach 50 inches over the upper Texas coast, including the Houston/Galveston metropolitan area. These rains are currently producing catastrophic and life-threatening flooding over large portions of southeastern Texas."

Harvey is currently drifting erratically toward the east-southeast, and a slow motion toward the southeast is expected later today through tonight. A gradual turn toward the northeast and a continued slow forward speed are expected Tuesday and Tuesday night. On the forecast track, the center of Harvey is expected to be just offshore of the middle and upper coasts of Texas through Tuesday night.

Maximum sustained winds are near 40 mph (65 kph) with higher gusts. Some slow intensification is possible during the next 48 hours. The minimum central pressure estimated from surface observations along the Texas coast is 998 millibars.

Harvey began on Aug. 17 as a weak tropical storm about 250 miles (~400 km) east of Barbados in the Leeward Islands. Over the next two days, Harvey continued moving steadily westward passing through the Leeward Islands as a still weak tropical storm and entered into the east central Caribbean. On Aug. 19, Harvey succumbed to the effects of northeasterly wind shear over the central Caribbean and lost its cyclonic circulation and weakened back into a tropical wave. The remnants of what was once Harvey then passed over the Yucatan Peninsula and into the Bay of Campeche.

Typically, it is hard for a system to reform after dissipating as well as after passing over land. However, the environmental conditions were favorable for development and the water temperatures in the Gulf of Mexico very warm. This allowed Harvey first to reform into a tropical depression on the morning of the Aug. 23 then strengthen back to a tropical storm later that evening. Having recovered its structure, Harvey was then able take further advantage of the low wind shear and warm waters and continue to intensify, becoming a hurricane by midday on Aug. 24 and then rapidly intensifying overnight into a Category 2 storm with maximum sustained winds reported at 110 mph (~175 kph) by the National Hurricane Center (NHC) at 15:00 UTC (10:00 am CDT) the next morning. Now moving northwest across the western Gulf and Mexico and headed straight for the central Texas coast, Harvey continued to get stronger during the day on Aug. 25 and reached its peak intensity as a Category 4 storm with sustained winds of 130 mph (215 kph) at 6:00 pm CDT according to NHC.

Harvey maintained this intensity until it made landfall later that evening at around 10:00 pm CDT as a Category 4 hurricane near Rockport, Texas, about 30 miles east-northeast of Corpus Christi. After making landfall, Harvey weakened and its winds decreased back down to tropical storm intensity by 1 p.m. CDT the next day on Aug. 26; however, as had been forecast, the steering currents collapsed, bringing the storm to a near standstill just inland from the Texas Gulf Coast and setting the stage for a catastrophic flooding event.

The image, created at NASA Goddard showed Harvey's cyclonic circulation was still quite evident in the visible/infrared clouds, but GPM showed that the rainfall pattern was highly asymmetric with the bulk of the rain located north and east of the center.

A broad area of moderate rain was evident from near Galveston Bay to north of Houston and back well to the west. Within that area were embedded areas of heavy rain. The peak estimated rain rate from GPM at the time of this overpass was 96 mm/hour (~3.77 inches per hour).

With Harvey's circulation still reaching out over the Gulf, the storm is able to draw in a continuous supply of warm moist air to sustain the large amount of rain it is producing.

Email ThisBlogThis!Share to TwitterShare to FacebookShare to Pinterest
Labels: Enviroment