Astronomers using Caltech's Owens Valley Radio Observatory (OVRO) have found evidence for a bizarre lensing system in space, in which a large assemblage of stars is magnifying a much more distant galaxy containing a jet-spewing supermassive black hole. The discovery provides the best view yet of blobs of hot gas that shoot out from supermassive black holes.

"We have known about the existence of these clumps of material streaming along black hole jets, and that they move close to the speed of light, but not much is known about their internal structure or how they are launched," says Harish Vedantham, a Caltech Millikan Postdoctoral Scholar. "With lensing systems like this one, we can see the clumps closer to the central engine of the black hole and in much more detail than before." Vedantham is lead author of two new studies describing the results in the Aug. 15 issue of The Astrophysical Journal. The international project is led by Anthony Readhead, the Robinson Professor of Astronomy, Emeritus, and director of the OVRO.

Illustration shows the likely configuration of a gravitational lensing system discovered by OVRO. The "milli-lens" is located in or near the intervening spiral galaxy. The lens is magnifying blobs of jet material within the active galaxy PKS1413+135, but the blobs are too small to be seen in the radio image (top left), taken by MOJAVE. Only when the blobs move far away from the yellow core do they expand and are visible as the pink blobs in the image. 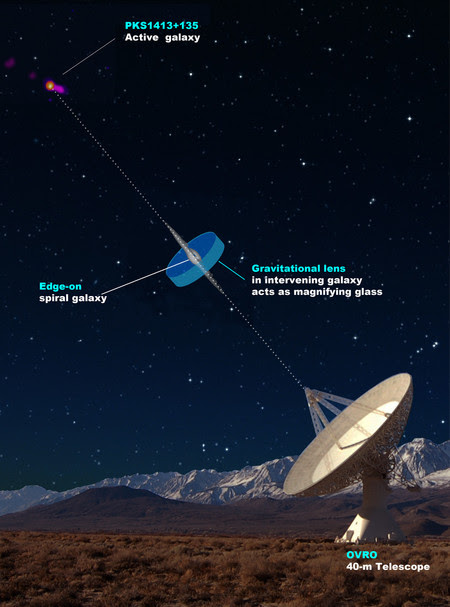 Many supermassive black holes at the centers of galaxies blast out jets of gas traveling near the speed of light. The gravity of black holes pulls material toward them, but some of that material ends up ejected away from the black hole in jets. The jets are active for one to 10 million years--every few years, they spit out additional clumps of hot material. With the new gravitational lensing system, these clumps can be seen at scales about 100 times smaller than before.

"The clumps we're seeing are very close to the central black hole and are tiny--only a few light-days across. We think these tiny components moving at close to the speed of light are being magnified by a gravitational lens in the foreground spiral galaxy," says Readhead. "This provides exquisite resolution of a millionth of a second of arc, which is equivalent to viewing a grain of salt on the moon from Earth."

A critical element of this lensing system is the lens itself. The scientists think that this could be the first lens of intermediate mass--which means that it is bigger than previously observed "micro" lenses consisting of single stars and smaller than the well-studied massive lenses as big as galaxies. The lens described in the new paper, dubbed a "milli-lens," is thought to be about 10,000 solar masses, and most likely consists of a cluster of stars. An advantage of a milli-sized lens is that it is small enough not to block the entire source, which allows the jet clumps to be magnified and viewed as they travel, one by one, behind the lens. What's more, the researchers say the lens itself is of scientific interest because not much is known about objects of this intermediate-mass range.

These data from OVRO (black), as well as the Metsähovi Radio Observatory (blue) and the Submillimeter Array (red), show the two gravitational lensing events (shaded in yellow). The symmetric U-shape is a result of apparent brightening and fading of clumps of material shot out from a black hole as they traversed behind the magnifying gravitational lens.


"This system could provide a superb cosmic laboratory for both the study of gravitational milli-lensing and the inner workings of the nuclear jet in an active galaxy," says Readhead.

The new findings are part of an OVRO program to obtain twice-weekly observations of 1,800 active supermassive black holes and their host galaxies, using OVRO's 40-meter telescope, which detects radio emissions from celestial objects. The program has been running since 2008 in support of NASA's Fermi mission, which observes the same galaxies in higher-energy gamma rays.

In 2010, the OVRO researchers noticed something unusual happening with the galaxy in the study, an active galaxy called PKS 1413+ 135. Its radio emission had brightened, faded, and then brightened again in a very symmetrical fashion over the course of a year. The same type of event happened again in 2015. After a careful analysis that ruled out other scenarios, the researchers concluded that the overall brightening of the galaxy is most likely due to two successive high-speed clumps ejected by the galaxy's black hole a few years apart. The clumps traveled along the jet and became magnified when they passed behind the milli-lens.

Image of the 40-meter telescope of the Owens Valley Radio Observatory (OVRO), located near Bishop, California. 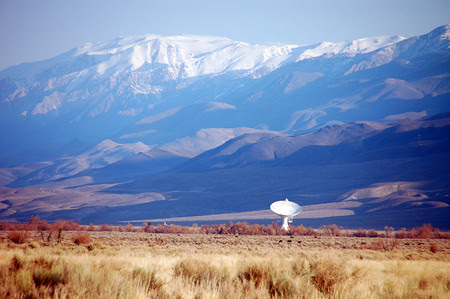 "It has taken observations of a huge number of galaxies to find this one object with the symmetrical dips in brightness that point to the presence of a gravitational lens," says coauthor Timothy Pearson, a senior research scientist at Caltech who helped discover in 1981 that the jet clumps travel at close to the speed of light. "We are now looking hard at all our other data to try to find similar objects that can give a magnified view of galactic nuclei."

The next step to confirm the PKS 1413+ 135 results is to observe the galaxy with a technique called very-long-baseline interferometry (VLBI), in which radio telescopes across the globe work together to image cosmic objects in detail. The researchers plan to use this technique beginning this fall to look at the galaxy and its supermassive black hole, which is expected to shoot out another clump of jet material in the next few years. With the VLBI technique, they should be able to see the clump smeared out into an arc across the sky via the light-bending effects of the milli-lens. Identifying an arc would confirm that indeed a milli-lens is magnifying the ultra-fast jet clumps spewing from a supermassive black hole.

"We couldn't do studies like these without a university observatory like the Owens Valley Radio Observatory, where we have the time to dedicate a large telescope exclusively to a single program," said Readhead.