Over the next few decades, global warming-related rises in winter temperatures could significantly extend the range of the southern pine beetle--one of the world's most aggressive tree-killing insects--through much of the northern United States and southern Canada, says a new study. The beetle's range is sharply limited by annual extreme temperature lows, but these lows are rising much faster than average temperatures--a trend that will probably drive the beetles' spread, say the authors. The study was published today in the journal Nature Climate Change.

The study points to "huge vulnerability across a vast ecosystem," said lead author Corey Lesk, a graduate student at Columbia University's Department of Earth and Environmental Sciences. "We could see loss of biodiversity and iconic regional forests. There would be damage to tourism and forestry industries in already struggling rural areas." Coauthor Radley Horton, a researcher at Columbia University's Lamont-Doherty Earth Observatory, said infested forests could also dry out and burn, endangering property and emitting large amounts of carbon into the atmosphere.

A new study projects the spread of the destructive southern pine beetle through much of the northern United States and southern Canada. Darker colors here represent infestations in successively later decades. 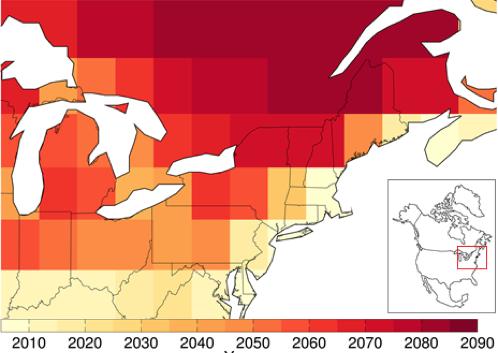 Until recently, southern pine beetles lived from Central America up into the southeastern United States, but in the past decade or so they have also begun appearing in parts of the Northeast and New England. Substantial outbreaks began occurring in New Jersey in 2001. The beetles were first found on New York's Long Island in New York in 2014 and Connecticut in 2015.

Lesk and Horton project that by 2020, the beetles will establish themselves along the Atlantic coast up to Nova Scotia. They say that by 2050, 78 percent of the 48,000 square miles now occupied by pitch pine forests from southern Maine to eastern Ohio will have climates newly suitable to the beetles. By 2060, they expect the beetle will further establish itself from southern New England through Wisconsin, and by 2080, climates suitable for the beetle should reach 71 percent of red pines and 48 percent of jack pines, which extend across more than 270,000 square miles of the northeastern United States and southern Canada.

The research is part of a larger body of work in which Lesk and Horton aim to identify risks to species and ecosystems related to changes in extreme temperatures. Many species are sensitive to highs and lows, which are expected to see wide swings in frequency and intensity as the climate warms. The researchers chose to focus on the southern pine beetle because it has a huge impact on forest ecosystems, and the influence of cold thresholds on its range has been well documented going back to the early 20th century. Pine beetle infestations in the southeastern United States cost an estimated $100 million a year in timber losses from 1990 through 2004 alone, according to the U.S. Forest Service.

Past such analyses have looked mainly at average July temperatures or average January temperatures, said Matthew Ayres, a professor of ecological science at Dartmouth College who has studied the beetles. This may seem sensible, he said, but "that variable, the coldest night of the winter, is very important for all kinds of things." The coldest night of the winter has warmed by approximately 6 or 7 degrees Fahrenheit over the past 50 years at weather stations in many parts of the United States, compared with just 1 degree Fahrenheit for average annual temperatures. Horton and Lesk project additional increases in annual minimum air temperatures of 6.3 to 13.5 degrees Fahrenheit across the northeastern United States and southeastern Canada by 2050 to 2070.

Dead pines in northeastern Oklahoma, where some forests have been hit hard by beetles. 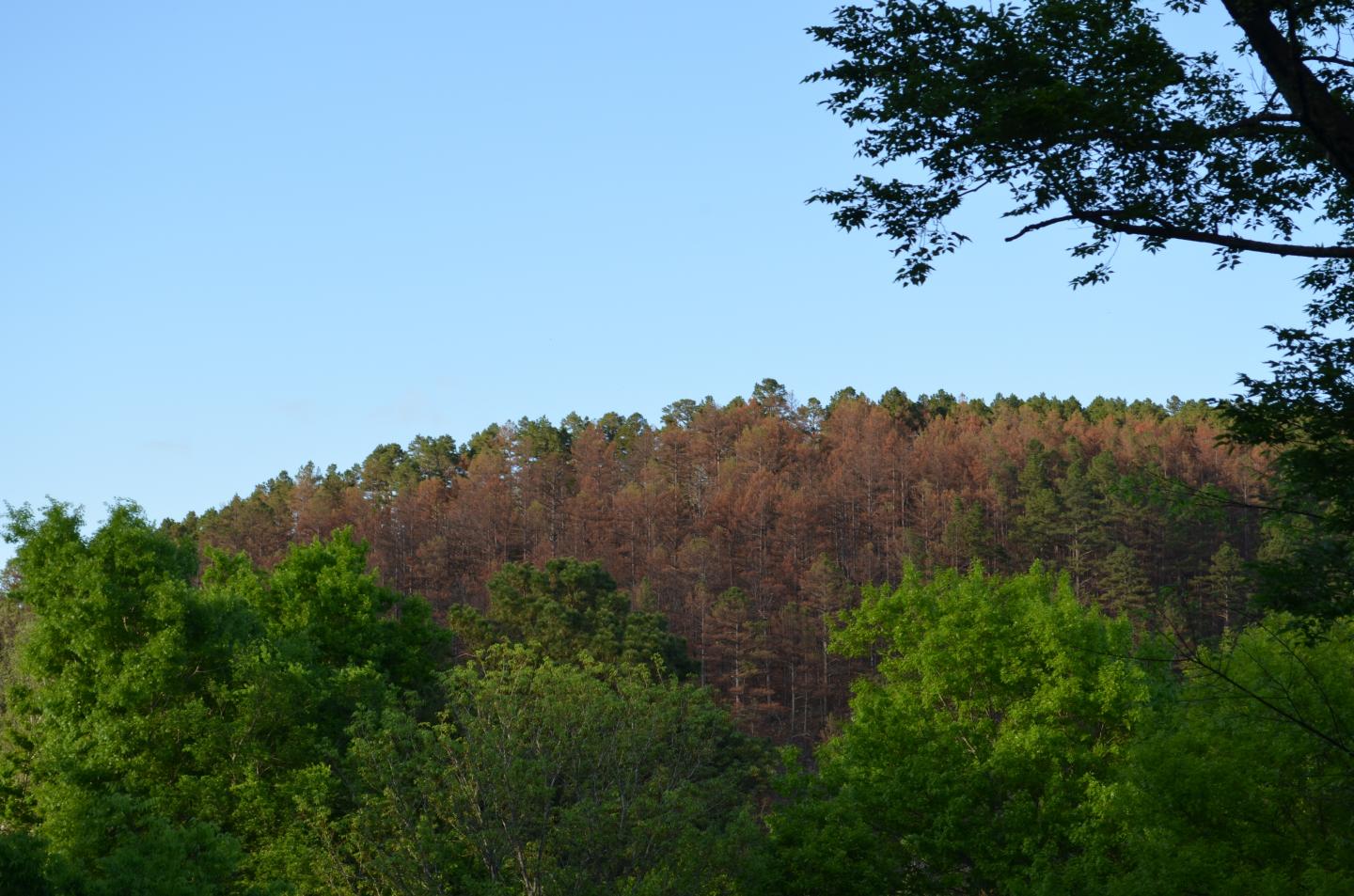 The researchers took a close look at New Jersey, where the beetles' spread occurred amid a warming trend in cold extremes. The temperature of the pine bark on which the beetles feed, which is warmer than the air, is apparently the critical factor. The northernmost sightings were highly correlated with latitudes at which winter bark temperatures reached a minimum of 14 degrees Fahrenheit. Since 1980, 14-degree winter minimum bark temperatures have migrated northward in New Jersey by about 40 miles per decade. The northernmost sightings of the beetles have drifted north by about 53 miles per decade since 2002.

To account for uncertainties in their projections, Lesk and Horton incorporated 27 different global climate models and two-greenhouse gas emissions models. They also factored in the possibility that the beetles would not be able to travel through pine-sparse hardwood forests in the northern United States. However, the beetles have already managed this feat in many areas. In all, the researchers found that the uncertainties resulted in a 43-year range between the earliest and latest year a climate suitable to the beetles would be expected to emerge on average across the study region.

The paper did not address some uncertainties, such as the possibility that cold extremes could change more dramatically than climate models suggest, if atmospheric circulation patterns or snow cover shift in unpredicted ways. There are also questions about how the beetles might respond to droughts or heat waves; how vulnerable northern pine species will be to beetle attacks; and how warming temperatures may affect the beetles' natural predators, such as the checkered beetle.

Land managers further south have used adaptive strategies with limited success, mainly thinning of forests where tree density is high, or cutting out infested trees. The question is whether these strategies will work in the north.

The paper, "Threats to North American forests from southern pine beetle with warming winters,"
on August 28, 2017