Why Do Lemurs Hum?

It's to protect them from predators and bolster social cohesion within the troop – not because they don’t know the words.

In research published in Ethology, University of Toronoto Mississauga primatologist Laura Bolt looked at the behavioural usage of “hmm” calls by Madagascar’s ring-tailed lemurs. She focused on two specific vocalizations – “moans” and “hmms” produced by male lemurs, which are the lowest ranking members in the female-dominant troop structure. Her research may provide clues about how ancient human ancestors may have socialized with each other. 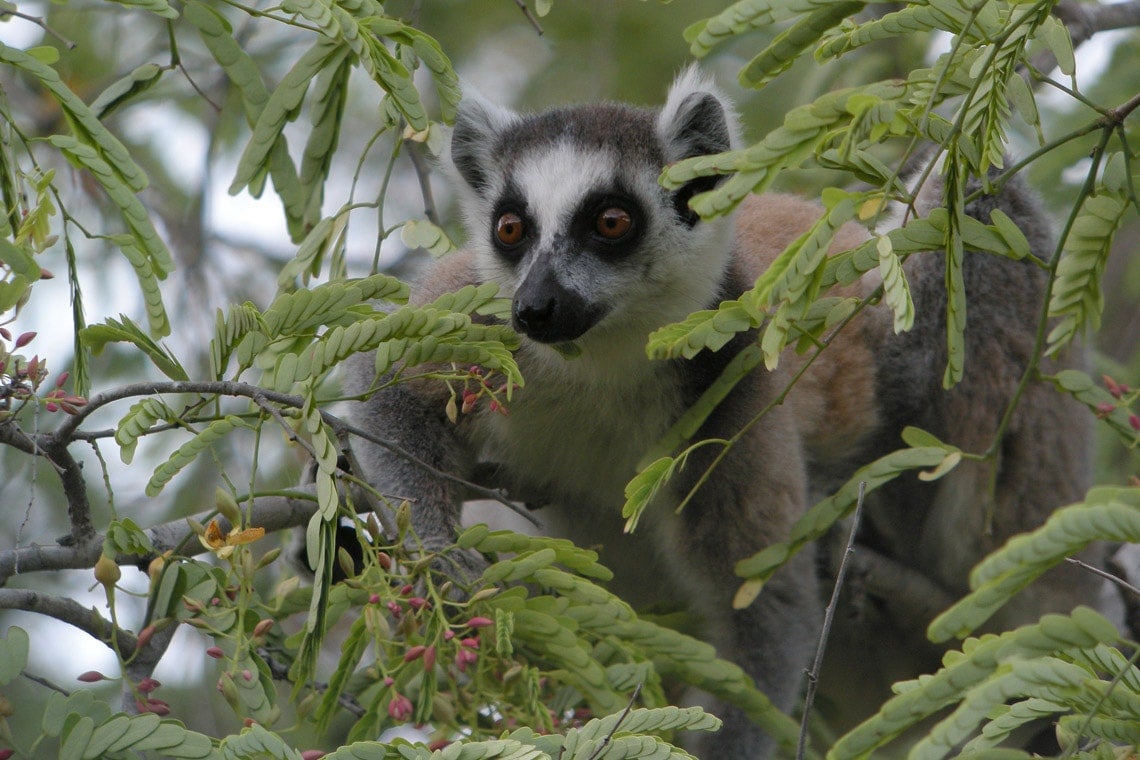 Bolt spent five months at the Beza Mahafaly Special Reserve, a remote protected park in southwest Madagascar, studying vocal communication in male members of five different lemur troops. Ring-tailed lemurs have the largest vocal repertoire of all lemurs and are known to make 22 different vocal sounds, some of which Bolt tested for their role in social cohesion.

“Social lemurs – those who live in social groups – are the living primates most like our early ancestors,” Bolt says. “Patterns of individual and sex-specific call usage are still poorly understood. Gaining a better knowledge of how group-living lemur species use contact calls helps to inform our understanding of the evolution of primate cognition.”

Ring-tailed lemurs spend their days moving through the tree canopy or along the forest floor in search of food, leaving the troop vulnerable to predators like the mongoose-like fossa, harrier hawks, and feral cat and dog populations. Contact calls are thought to help the lemurs keep track of other members of the troop, providing a measure of safety.

“We found that male ring-tailed lemurs used both moan and hmm calls to maintain proximity to their nearest neighbour,” Bolt says. “They performed both moan and hmm vocalizations at higher rates during behaviours that could lead to separation from group members, such as during travel or vigilance.” For the moan vocalization, the highest call rates occurred when the nearest neighbor was further away. Bolt (below) found that “hmm” vocalizations were used most often by low-ranking males, especially when preferred companions were nearby. Since low-ranking individuals are often targets of aggression in this species, and Bolt concludes that low-ranking males make “hmm” sounds as a way to stay close to specific members of the group who will show them more tolerance.

“These results further our understanding of how ring-tailed lemur vocalizations may function to keep social groups together,” she says.

The study was supported by funding from the Natural Sciences and Engineering Research Council of Canada (CGS-D award), the Ontario Graduate Scholarships program, the American Museum of Natural History, the Edward J. Noble Foundation, the St. Catherines Island Foundation and the University of Toronto.

Contacts and sources:
Blake Eligh
University of Toronto
on July 09, 2017