In a wooden container found in the Bernese Alps in 2012, a researcher from the Max Planck Institute for the Science of Human History, together with an international research team, has discovered the remains of ancient wheat dating back to the Bronze Age. The find is significant for two reasons: Firstly, there have been very few clues to indicate how cereals were used and spread during this period. Secondly, the scientists discovered a new way for molecular identification of cereal grains in archaeological artefacts. This opens up new possibilities for research.

At the bottom of a Bronze Age wooden vessel, researchers discovered residues of cereal grains (central dark spot). Additionally, parts of a bent rim were found, indicating that the container must have been about 10 centimetres high. More fragments, perhaps parts of the top, still need to be examined. 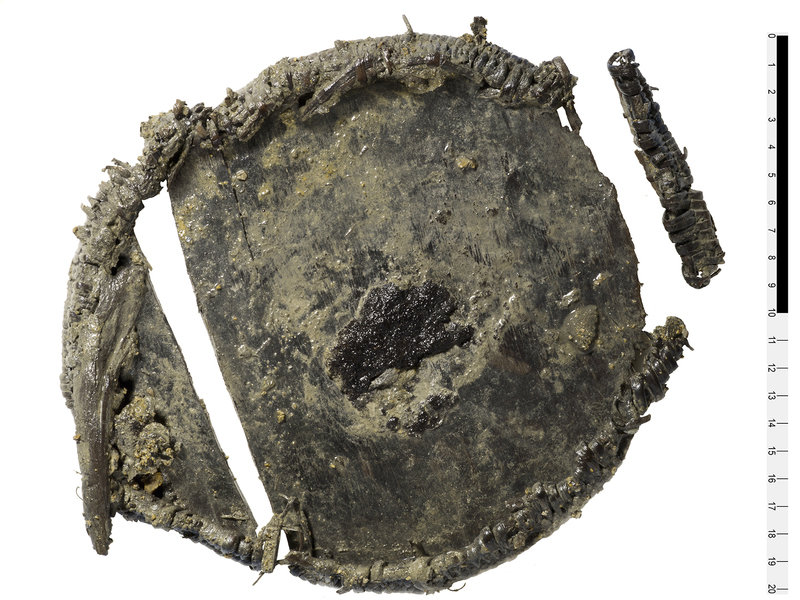 © Archaeological Service of the Canton of Bern, Badri Redha

Melting glaciers are increasingly revealing finds from the past. They are not always as spectacular as “Ötzi”, the glacier mummy who lived during the late-Neolithic Age, and was discovered by hikers in the Ötztal Alps in 1991. However, even less sensational discoveries of perishable materials such as fabrics, leather, wood and other plant-based remains that survive for hundreds or even thousands of years in ice, open up new perspectives on the past for archaeologists.

In 2012, the ice near the Lötschenpass, at 2,690 metres in the Bernese Alps, revealed an extraordinary wooden vessel. The round container measures approx. 20 cm in diameter. The base consists of Swiss pine, the bent rim is made of willow; both sections were sewn together with splint twigs of European larch. Radiocarbon dating showed that the vessel is around 4,000 years old and thus dates back to the early Bronze Age.

Traces found on the upper surface of the container were of particular interest to the research team, which included Jessica Hendy from the Max Planck Institute for the Science of Human History: a microscopic examination revealed a residue of barley, spelt and emmer, including pericarp and glumes. Cereal grains are frequently found at Bronze Age cave sites. However, vessels containing grains or their residues were have never been reported before. These are of particular interest to researchers, as they provide clues as to how the cereal was used at that time.
Traders, herders or hunters?

The scientists can only guess the story behind the box found at the Lötschenpass. They know that some alpine valleys in the area were settled during the Bronze Age. A large number of Early Bronze age graves in neighbouring Valais show that the valley was not only settled but people imported goods from north and south of the Alps. The vessel could be linked with either trading connections or seasonal movements from lowland areas to upland pastures as part of the pastoral economy. Hunting could also explain the requirement to access such rocky and glaciated areas of the high Alps.

Francesco Carrer from Newcastle University said: “This evidence sheds new light on life in prehistoric alpine communities, and on their relationship with the extreme high altitudes. People travelling across the alpine passes were carrying food for their journey, like current hikers do. This new research contributed to understanding which food they considered the most suitable for their trips across the Alps.”

The scientists actually expected to find milk residues in the vessel, for example a porridge type meal. They therefore performed a molecular analysis on the discovery. They did not find any evidence of milk but instead discovered alkylresorcinols, which are found in modern-day whole grain products.

André Colonese of the University of York, lead author of the study, states, “These phenolic lipids have never been reported before in an archaeological artefact, but are abundant in the bran of wheat and rye cereals. One of the greatest challenges of lipid analysis in archaeology has been finding biomarkers for plants. There are only a few and they do not preserve very well in ancient artefacts. You can imagine the relevance of this study. It really is very exciting.”

The new method opens up possibilities for discovering how Bronze Age people actually used cereals. As a next step, the scientists plan to look for these biomarkers in ancient ceramic artefacts.

“Detecting a molecular marker for cereals also has widespread implications for studying early farming. It enables us to piece together when and where this important food crop spread through Europe,” adds Jessica Hendy, from the Max Planck Institute for the Science of Human History.