Aboriginal people have been in Australia for at least 65,000 years - much longer than the 47,000 years believed by some archaeologists.

The discovery, by a team of archaeologists and dating specialists led by Associate Professor Chris Clarkson from The University of Queensland School of Social Science, has been detailed in the Nature journal this week.

The researchers found new evidence at the Madjedbebe site on Mirarr land within the Jabiluka mineral lease, surrounded by the World Heritage-listed Kakadu National Park. Madjedbebe rock shelter has been excavated four times since the 1970s, most recently by an international team led by Dr Clarkson in partnership with the Mirarr Traditional Owners.

Dr Clarkson said more than 10,000 artefacts were revealed in the lowest layer at the site.

"The site contains the oldest ground-edge stone axe technology in the world, the oldest known seed-grinding tools in Australia and evidence of finely made stone points which may have served as spear tips," he said.

Axes and grinding stones from the Pleistocene found in the excavations. "Most striking of all, in a region known for its spectacular rock art, are the huge quantities of ground ochre and evidence of ochre processing found at the site, from the older layer continuing through to the present."

The dig discovered a maxillary (upper jaw) fragment of a Tasmanian Tiger coated in red pigment, giving insight to the central role ochre played in local customs at the time. 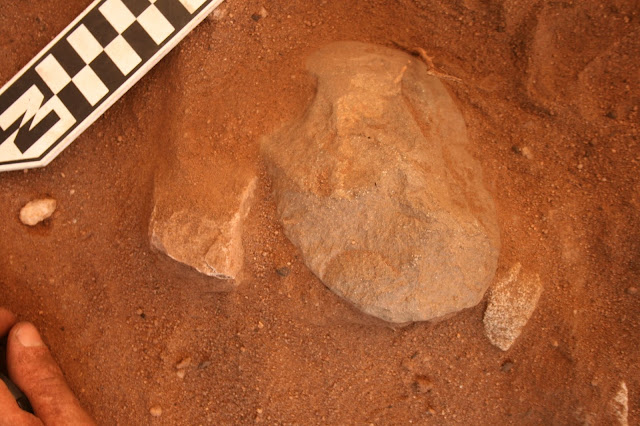 Dating carried out by Professor Zenobia Jacobs at the University of Wollongong has revealed that Aboriginal people lived at Madjedbebe at the same time as extinct species of giant animals were roaming around Australia, and the tiny species of primitive human, Homo floresiensis, was living on the island of Flores in eastern Indonesia.

In addition to showing the deep antiquity of Aboriginal occupation, the dig revealed new evidence of activities and lifestyle.

a landmark agreement had made it possible for Dr Clarkson and colleagues to dig the site.

"This study shatters previous understandings of the sophistication of the Aboriginal toolkit and underscores the universal importance of the Jabiluka area," Mr O'Brien said.

By placing the date of Australian settlement at around 65,000 years ago, researchers confirm some of the shifting theories about when the first humans left Africa. A common view is that humans moved into Asia 80,000 years ago, and if they migrated to Australia some to 15,000 years later, it means those ancestors co-existed with another early human in Asia, Homo florensiensis. It also means that these early Australians preceded early Europeans, who are believed to have entered that continent 45,000 years ago. A related question is whether these early human species left Africa at one time, gradually spreading the population through Asia, Europe and Australia, or whether there were multiple waves of migration.

In recent years, new evidence, obtained through DNA testing of a 90-year-old hair sample of an Aboriginal Australian man, suggests Australia was settled as far back as 70,000 years ago.

The new date makes a difference, co-author and UW associate professor of anthropology Ben Marwicksaid. Against the backdrop of theories that place humans in Australia anywhere between 47,000 and 60,000 years ago, the concept of earlier settlement calls into question the argument that humans caused the extinction of unique megafauna such as giant kangaroos, wombats and tortoises more than 45,000 years ago.

“Previously it was thought that humans arrived and hunted them out or disturbed their habits, leading to extinction, but these dates confirm that people arrived so far before that they wouldn’t be the central cause of the death of megafauna,” Marwick said. “It shifts the idea of humans charging into the landscape and killing off the megafauna. It moves toward a vision of humans moving in and coexisting, which is quite a different view of human evolution.”

Since 1973, digs at Madjedbebe, a rock shelter in Australia’s Northern Territory, have unearthed more than 10,000 stone tools, ochres, plant remains and bones. Following the more recent excavations in 2012 and 2015, a University of Queensland-led research team, which included the UW, evaluated artifacts found in various layers of settlement using radiocarbon dating and optical stimulated luminescence (OSL).

Marwick believes the Madjedbebe results, because they rely on so many artifacts and intensive analysis of sediment samples, confirm that early humans occupied Australia at least 65,000 years ago and support the theory that Homo sapiens, the species of modern-day humans, evolved in Africa before dispersing to other continents. The findings also suggest Homo sapiens‘ predecessors, Neanderthalsand Denisovans, overlapped with humans for a long period of time, and suggest a larger role for Australia, and the Eastern Hemisphere in general, in the story of humankind.

Marwick, who advocates for open science, particularly in data collection and the code used to analyze it, noted that the Nature paper is also pushing new frontiers because it combines three strands of reproducibility. Researchers examined a field site that has been excavated in the past; they’ve made available their raw data and code; and they consulted an outside lab for third-party OSL verification.

All images and video copyright of Gundjeihmi Aboriginal Corporation.
on July 19, 2017