The Squarest Ice Crystals Ever Made

You won't find ice cubes like this in your freezer.

An international team of scientists has set a new record for creating ice crystals that have a near-perfect cubic arrangement of water molecules--a form of ice that may exist in the coldest high-altitude clouds but is extremely hard to make on Earth.

The ability to make and study cubic ice in the laboratory could improve computer models of how clouds interact with sunlight and the atmosphere--two keys to understanding climate change, said Barbara Wyslouzil, project leader and professor of chemical and biomolecular engineering at The Ohio State University.

It could also enhance our understanding of water - one of the most important molecules for life on our planet.

Researchers created ice crystals with a near-perfect cubic arrangement of water molecules, in order to better understand how high-altitude ice clouds interact with sunlight and the atmosphere. In this X-ray diffraction image, the ice crystals have scattered X-rays to create concentric rings, which are a fingerprint of the molecular arrangement within the crystals. 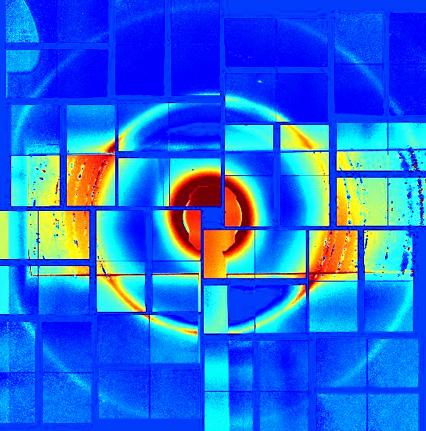 
Seen under a microscope, normal water ice--everything from frozen ponds, to snow, to the ice we make at home--is made of crystals with hexagonal symmetry, Wyslouzil explained. But with only a slight change in how the water molecules are arranged in ice, the crystals can take on a cubic form.

So far, researchers have used the presence of cold cubic ice clouds high above the earth's surface to explain interesting halos observed around the sun, as well as the presence of triangular ice crystals in the atmosphere. Scientists have struggled for decades to make cubic ice in the laboratory, but because the cubic form is unstable, the closest anyone has come is to make hybrid crystals that are around 70 percent cubic, 30 percent hexagonal.

In a paper published in the Journal of Physical Chemistry Letters, Wyslouzil, graduate research associate Andrew Amaya and their collaborators describe how they were able to create frozen water droplets that were nearly 80 percent cubic.

"While 80 percent might not sound 'near perfect,' most researchers no longer believe that 100 percent pure cubic ice is attainable in the lab or in nature," she said. "So the question is, how cubic can we make it with current technology? Previous experiments and computer simulations observed ice that is about 75 percent cubic, but we've exceeded that."


Left: Ice clouds in the upper atmosphere scatter light, sometimes creating haloes around the sun. To better understand how clouds interact with sunlight and the atmosphere, researchers have created a special form of ice in the laboratory. Right: The newly created ice crystals scatter X-rays into a pattern of concentric circles with a particular frequency and intensity, indicating that water molecules in the crystals have a near-perfect cubic arrangement. 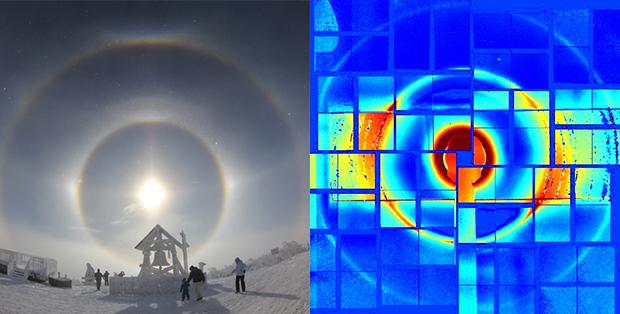 
To make the highly cubic ice, the researchers drew nitrogen and water vapor through nozzles at supersonic speeds. When the gas expanded, it cooled and formed droplets a hundred thousand times smaller than the average raindrop. These droplets were highly supercooled, meaning that they were liquid well below the usual freezing temperature of 32 degrees Fahrenheit (0 degrees Celsius). In fact, the droplets remained liquid until about -55 degrees Fahrenheit (around -48 degrees Celsius) and then froze in about one millionth of a second.

To measure the cubicity of the ice formed in the nozzle, researchers performed X-ray diffraction experiments at the Linac Coherent Light Source (LCLS) at the SLAC National Accelerator Laboratory in Menlo Park, CA. There, they hit the droplets with the high-intensity X-ray laser from LCLS and recorded the diffraction pattern on an X-ray camera. They saw concentric rings at wavelengths and intensities that indicated the crystals were around 80 percent cubic.

The extremely low temperatures and rapid freezing were crucial to forming cubic ice, Wyslouzil said: "Since liquid water drops in high-altitude clouds are typically supercooled, there is a good chance for cubic ice to form there."

Exactly why it was possible to make crystals with around 80 percent cubicity is currently unknown. But, then again, exactly how water freezes on the molecular level is also unknown.

"When water freezes slowly, we can think of ice as being built from water molecules the way you build a brick wall, one brick on top of the other," said Claudiu Stan, a research associate at the Stanford PULSE Institute at SLAC and partner in the project. "But freezing in high-altitude clouds happens too fast for that to be the case--instead, freezing might be thought as starting from a disordered pile of bricks that hastily rearranges itself to form a brick wall, possibly containing defects or having an unusual arrangement. This kind of crystal-making process is so fast and complex that we need sophisticated equipment just to begin to see what is happening. Our research is motivated by the idea that in the future we can develop experiments that will let us see crystals as they form."