No bells tolled when the last Catarina pupfish on Earth died. Newspapers didn't carry the story when the Christmas Island pipistrelle vanished forever.

Two vertebrate species go extinct every year on average, but few people notice, perhaps because the rate seems relatively slow - not a clear and present threat to the natural systems we depend on. This view overlooks trends of extreme decline in animal populations, which tell a more dire story with cascading consequences, according to a new study that provides the first global evaluation of these population trends.

"This is the case of a biological annihilation occurring globally, even if the species these populations belong to are still present somewhere on Earth," said co-author Rodolfo Dirzo, a Stanford professor of biology.

Tropical forest logging has contributed to population declines in many animals, including the Bornean gibbon, known for its whooping call. 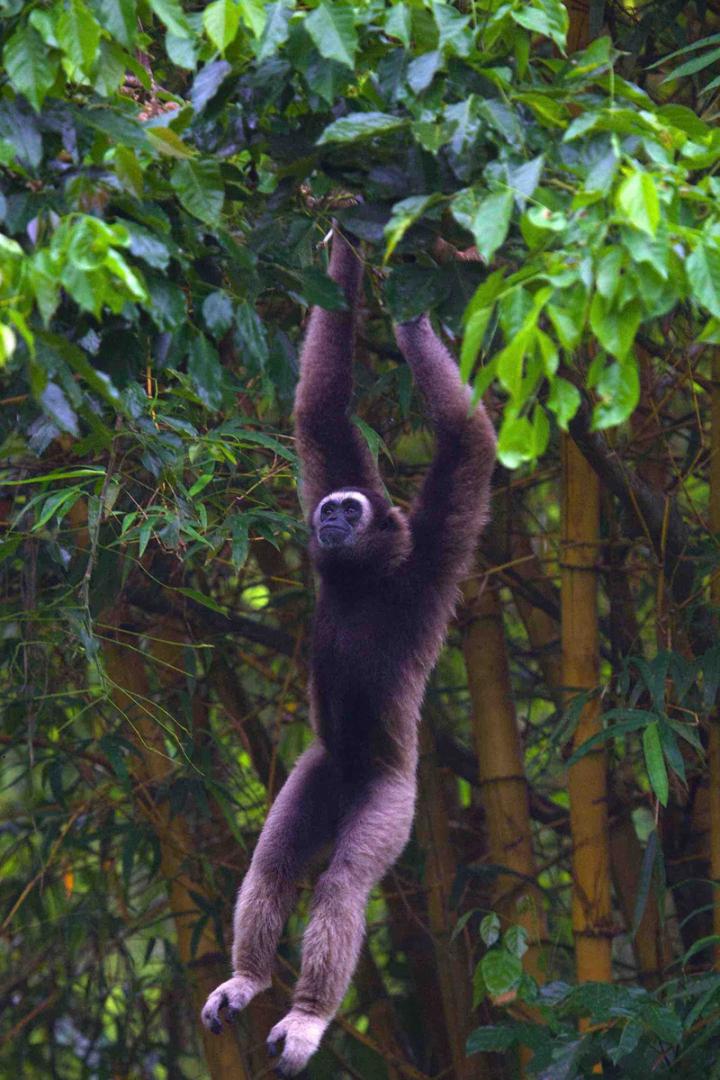 A 2015 study co-authored by Paul Ehrlich, professor emeritus of biology, and colleagues showed that Earth has entered an era of mass extinction unparalleled since the dinosaurs died out 66 million years ago. The specter of extinction hangs over about 41 percent of all amphibian species and 26 percent of all mammals, according to the International Union for Conservation of Nature (IUCN), which maintains a list of threatened and extinct species. This global disaster scene has the fingerprints of habitat loss, overexploitation, invasive organisms, pollution, toxification and climate change.

The new analysis, published in Proceedings of the National Academy of Sciences, looks beyond species extinctions to provide a clear picture of dwindling populations and ranges. The researchers mapped the ranges of 27,600 species of birds, amphibians, mammals and reptiles - a sample representing nearly half of known terrestrial vertebrate species - and analyzed population losses in a sample of 177 well-studied mammal species between 1990 and 2015.

Using range reduction as a proxy for population loss, the study finds more than 30 percent of vertebrate species are declining in population size and range. Of the 177 mammals for which the researchers had detailed data, all have lost 30 percent or more of their geographic ranges and more than 40 percent have lost more than 80 percent of their ranges.

The study's maps suggest that as much as 50 percent of the number of animal individuals that once shared Earth have disappeared, as have billions of animal populations. This amounts to "a massive erosion of the greatest biological diversity in the history of Earth," the authors write.

"The massive loss of populations and species reflects our lack of empathy to all the wild species that have been our companions since our origins," said the new study's lead author, Gerardo Ceballos of the National Autonomous University of Mexico. "It is a prelude to the disappearance of many more species and the decline of natural systems that make civilization possible."

Why does the loss of populations and biological diversity matter? Aside from being what the scientists call a prelude to species extinction, the losses rob us of crucial ecosystem services such as honeybees' crop pollination, pest control and wetlands' water purification. We also lose intricate ecological networks involving animals, plants and microorganisms - leading to less resilient ecosystems and pools of genetic information that may prove vital to species' survival in a rapidly changing global environment.

"Sadly, our descendants will also have to do without the aesthetic pleasures and sources of imagination provided by our only known living counterparts in the universe," said Ehrlich.

In the meantime, the overall scope of population losses makes clear the world cannot wait to address biodiversity damage, according to the authors. They call for curbs on the basic drivers of extinction - human overpopulation and overconsumption - and challenge society to move away from "the fiction that perpetual growth can occur on a finite planet."

Dirzo is also the Bing Professor in Environmental Science. Dirzo and Ehrlich are senior fellows at the Stanford Woods Institute for the Environment.