Our Grandparents' Experiences Can Affect Our Genes

Studies of human populations suggest that our health and longevity could be affected by the diets and experiences of our grandparents. For example, studies of a small community in northern Sweden where detailed historical records were kept found correlations between food availability for one generation and the mortality rate for that generation's grandchildren.

But the exact nature of these effects and how they are transmitted across generations remain unclear. In Susan Strome's lab at UC Santa Cruz, research on a tiny roundworm called C. elegans is helping to solve this puzzle. Her latest grant from the National Institutes of Health (NIH), for around $2 million over four years, funds a research proposal that received a perfect score from the reviewers.

The roundworm C. elegans is about one millimeter long. In the middle image, the 13 or so football-shaped structures lined up in the upper mid-section of the worm are embryos. In the top image, the germline cells are green and the intestine is blue. The drawing on the bottom shows the germline in green. 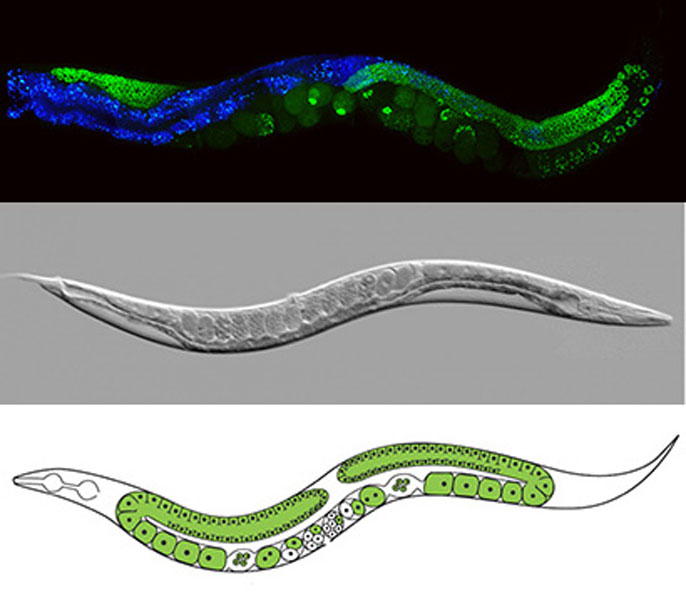 
"NIH is supporting this basic research in a model organism because it is the only way to crack open the mechanisms behind the correlations seen in human studies. You can't do these kinds of experiments in humans," said Strome, a distinguished professor of molecular, cell and developmental biology.

Scientists have long understood how inherited traits are transmitted from generation to generation via the DNA sequences of genes. They have also figured out how genes get turned on or off in different cells, so that different sets of genes are active in liver cells and skin cells, for example. This involves "epigenetic" changes that do not alter the DNA sequence, but add chemical modifications to either the DNA itself or the histone proteins with which DNA is packaged in the chromosomes. Epigenetic changes to gene expression can also result from environmental factors, such as diet or exposure to toxins.
Revolutionary concept

A key question has been whether such changes can be passed across generations. The idea that epigenetic modifications can cause changes in gene expression that are transmitted from one generation to the next is known as "transgenerational epigenetic inheritance." It is a revolutionary concept that remains somewhat controversial despite mounting evidence to back it up.

Strome's lab made a crucial contribution to the field in 2014 with a study demonstrating how epigenetic marks that repress genes can be transmitted across generations through the germ line cells — eggs and sperm — that unite to form a new organism.

"We have developed a very powerful system for studying how epigenetic information gets passed between generations, and it gives us the ability to unravel the mechanisms involved," Strome said.

"We want to create a detailed map of the epigenetic markings in the sperm, in the egg, and in the early embryo. This will enable us to address a number of important questions, such as how does the embryo deal with potentially conflicting marks inherited from the two parents?" Strome said.

She also plans to test whether changes in gene expression caused by a stressful environment can be passed from parents to offspring through epigenetic marks. Using exposure to alcohol as the stressor, the researchers will profile gene expression patterns and epigenetic markers in stressed and non-stressed worms, and then look at the consequences in their offspring.

This is a particularly exciting area of research that is being pursued at many different levels, including studies of human populations and experiments in mice and rats. Some of these studies suggest that the effects of extreme stress can be passed on, causing offspring or "grand-offspring" to be more prone to anxiety or mental illness. But these studies can be difficult to interpret, and working with a simpler organism enables Strome's lab to explore the role of epigenetics at the molecular level.

"The lessons we learn from our worm studies can help us make sense of the results of experiments with vertebrate models and studies of human populations," Strome said.