Now Even Kids Will Be Able to Weigh Black Holes

Astronomers from Swinburne University of Technology, Australia, and the University of Minnesota Duluth, USA, have provided a way for armchair astronomers, and even primary school children, to merely look at a spiral galaxy and estimate the mass of its hidden, central black hole.

The research was supported by the Australian Research Council and has been published in the journal Monthly Notices of the Royal Astronomical Society​.

Artistic rendering of a black hole accumulating matter at the centre of a galaxy.

Given that black holes emit no discernible light, they have traditionally been studied via highly technical observations of the stars and gas orbiting around them, which in turn provide a measurement of how massive they must be.

Now, new research based on these pre-existing measurements has shown that a black hole’s mass can be accurately estimated by simply looking at the spiral arms of its host galaxy.

Prof Marc Seigar, Associate Dean of the Swenson College of Science and Engineering at the University of Minnesota Duluth, and co-author of the study, discovered a relationship between central black hole mass and the tightness of a galaxy’s spiral arms nearly a decade ago.

After carefully analysing a larger sample of galaxies, imaged by an array of space telescopes, the researchers observed an unexpectedly strong relationship, and one which predicts lower mass black holes in galaxies with open spiral arms (types Sc and Sd).

Spiral galaxy arms with varying degrees of tightness, and the corresponding galaxy type and central black hole mass in units of our Sun’s mass. This template can be used to estimate the black hole masses in spiral galaxies. 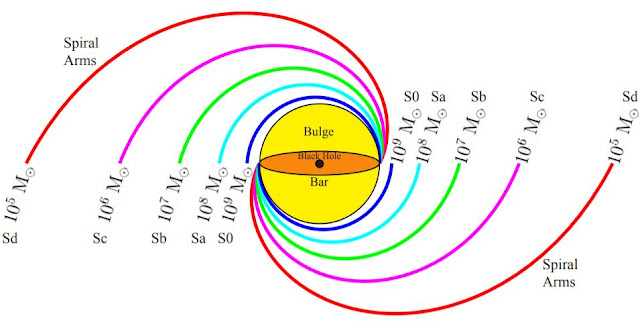 
“The strength of the correlation is competitive with, if not better than, all our other methods used to predict black hole masses,” says Dr Davis. “Anyone can now look at an image of a spiral galaxy and immediately gauge how massive its black hole should be.”

Given that it is the discs of galaxies that host the spiral pattern, the study highlights the poorly-known connection between galaxy discs and black holes. Moreover, the procedure allows for the prediction of black hole masses in pure disc galaxies with no stellar bulge. “This implies that black holes and the discs of their host galaxies must co-evolve,” says Dr Davis.

The 'Sab' type galaxy Messier 81, located in the northern constellation of Ursa Major, has a black hole mass of 68 million Suns.

"It's now as easy as 'a,b,c' to unlock this mystery of our Universe and reveal the black hole masses in spiral galaxies,” says Prof Graham.

“Importantly, the relation will also help searches for the suspected, but currently missing, population of intermediate-mass black holes with masses between 100 and 100,000 times the mass of our Sun. Difficult to pin down, they have masses greater than that of any single star, but are smaller than the supermassive black holes which grow to billions of times the mass of our Sun in giant galaxies,” Prof Graham says.

Working within the Australian Research Council’s OzGrav Centre for Excellence, the astronomers intend to hunt down these elusive black holes, and investigate implications for the production of gravitational waves: those ripples in the fabric of Einstein’s space-time that were first announced by the LIGO and Virgo collaborations in 2016.