Using a combination of fossils and chemical markers, scientists have tracked how a period of globally low ocean-oxygen turned an Early Jurassic marine ecosystem into a stressed community inhabited by only a few species.

The research was led by Rowan Martindale, an assistant professor at The University of Texas at Austin Jackson School of Geosciences, and published in print in Palaeogeography, Palaeoclimatology, Palaeoeconology on July 15. The study was co-authored by Martin Aberhan, a curator at the Institute for Evolution and Biodiversity Science at the Natural History Museum in Berlin, Germany.

The study zeroes in on a recently discovered fossil site in Canada located at Ya Ha Tinda Ranch near Banff National Park in southwest Alberta. The site records fossils of organisms that lived about 183 million years ago during the Early Jurassic in a shallow sea that once covered the region.

Before the low oxygen period, bivalves were larger and more numerous. 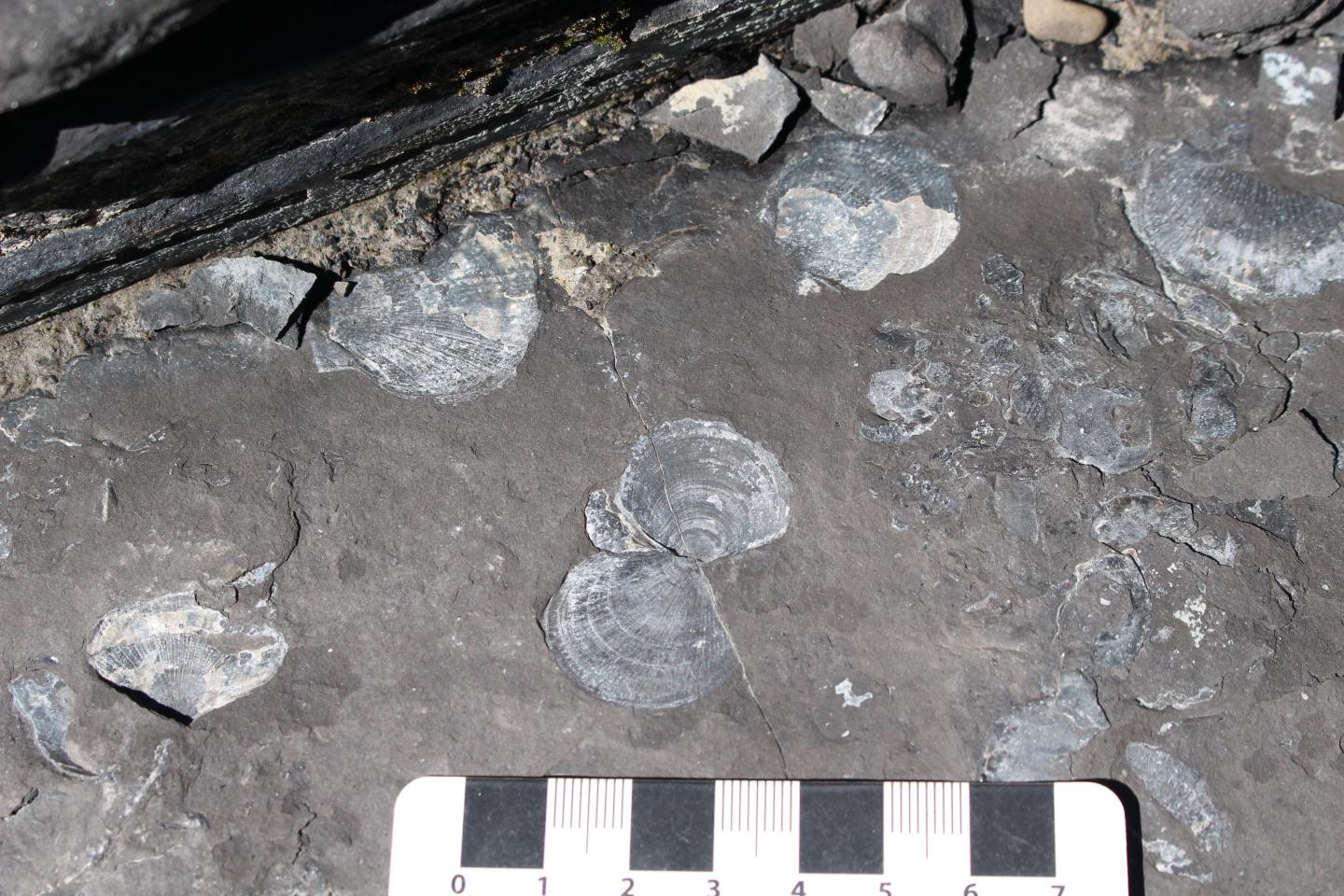 Credit: The University of Texas at Austin/Rowan Martindale


The fossil site broadens the scientific record of the Toarcian Oceanic Anoxic Event, a period of low oxygen in shallow ocean waters which is hypothesized to be triggered by massive volcanic eruptions. The Oceanic Anoxic Event was identified at this site by the geochemical record preserved in the rocks. These geochemical data were collected in a previous research project led by Benjamin Gill and Theodore Them of Virginia Tech. The oxygen level of the surrounding environment during the Early Jurassic influences the type and amount of carbon preserved in rocks, making the geochemical record an important method for tracking an anoxic event.

The low oxygen environment affected the growth and number of bivalves, reducing their number and population. 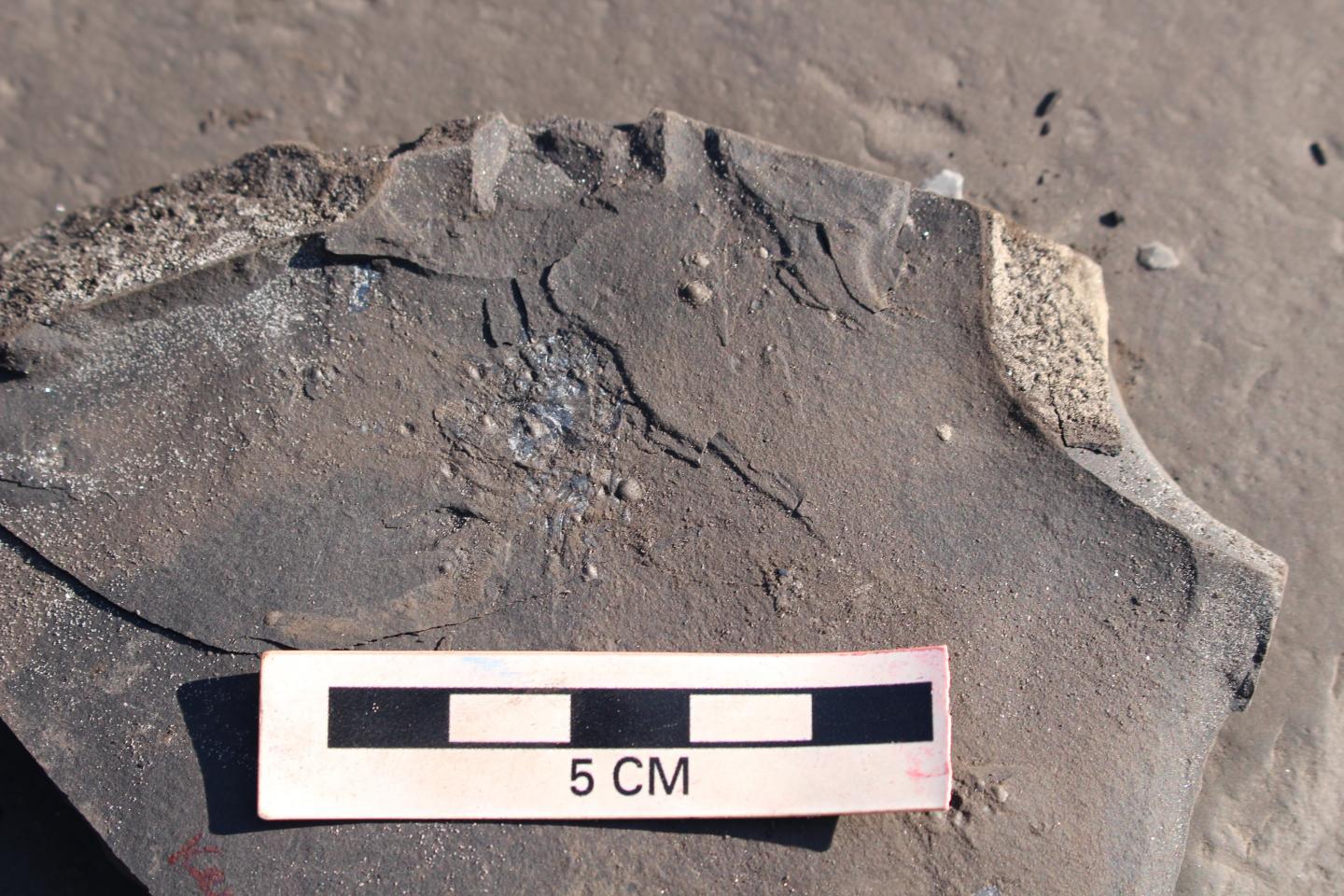 Credit: The University of Texas at Austin/Rowan Martindale


"We have this beautiful geochemical record that gives us a backbone for the timing of the Oceanic Anoxic Event," said Martindale, a researcher in the Jackson School's Department of Geological Sciences. "So with that framework we can look at the benthic community, the organisms that are living on the bottom of the ocean, and ask 'how did this community respond to the anoxic event?"

The clams that survived during and after the event were much smaller than the clams from before the event, suggesting that low oxygen levels limited their growth.

The sea life recorded at Ya Ha Tinda before and during the anoxic event is similar to fossils found at European sites. Crispin Little, a senior lecturer in paleontology at The University of Leeds who was not involved with the research, said that the similarity between the sites underscores the widespread nature of the anoxic event.

However, while other sites were recovering from the anoxic event, the environment at Ya Ha Tinda continued to face stress. Even for small, hardy bivalves, life was tough.

"One of the interesting things about the recovery [at Ya Ha Tinda] is that we actually see fewer individuals at a time when we're supposed to be seeing community recovery," Martindale said.

The fossils suggest that the environment was undergoing local stresses that kept oxygen low, Martindale said. More research is needed to untangle why life at Ya Ha Tinda didn't recover at the same rate as other places.

Since the oceanic anoxic event was a side-effect of climate change, looking back at ancient marine communities could be a window into the potential impacts of ongoing and future climate change, said co-author Martin Aberhan.

"One lesson we can learn from this study is that, on a human time scale, climate-related stresses can have very long-lasting effects, with no signs of recovery for hundred thousands of years, and that the communities before and after a climatic crises can look quite different in composition and ecological functioning," Aberhan said.