Complex Gas Motion in the Centre of the Milky Way Revealed

How does the gas in the centre of the Milky Way behave? Researchers from Heidelberg University, in collaboration with colleagues from the University of Oxford, recently investigated the motion of gas clouds in a comprehensive computer simulation.

Our solar system is located in the outer regions of the Milky Way, a disk-shaped galaxy with an approximate diameter of 100,000 light years. From the earth, its appearance can only be observed indirectly, by measuring positions and movements of stars and gas clouds. The Milky Way is most likely a barred spiral galaxy, a very commonly observed type of galaxy in the universe. A well-known example is the galaxy M61.

Spiral galaxy Messier 61, picture taken with the Hubble Space Telescope. Our Milky Way might look like this galaxy. 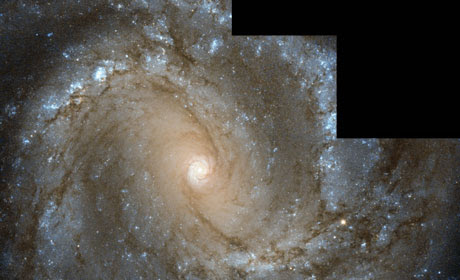 Source: ESA/Hubble & NASA. Acknowledgements: G. Chapdelaine, L. Limatola, and R. Gendler
In addition to the luminous stars, a substantial portion of the visible matter in our Milky Way is interstellar gas. The distribution and motion of this gas is very complex. Especially in the centre of the Galaxy, there are substantial discrepancies between the measured quantities of gas and the low rate of star formation. "Our simulation not only eliminates these discrepancies found in previous models, but also allows us to reproduce the observed motion of the gas surprisingly well," says Prof. Dr Ralf S. Klessen, one of the researchers at the Institute of Theoretical Astrophysics at the Centre for Astronomy of Heidelberg University (ZAH).
The figure shows the results of the simulation of the flow of gas at the centre of the Galaxy. The spiral structure in the innermost region and the two arms are easily identifiable.

In the new model, gas clouds in the so-called central molecular zone (CMZ) – the innermost 1,500 light years of the Milky Way – move on an elliptical central disk that has two spiral arms. Gas from the surroundings flows through these arms into the CMZ. Collisions of gas clouds create shock waves, generating turbulence. "This turbulence could prevent the gas clouds from collapsing into stars, providing a consistent explanation for the unexpectedly low rate of star formation in this region," says Dr Sormani.

The computer simulation allowed the researchers to create a spatial image of the centre of the Galaxy and determine the position of some known gas clouds within this three-dimensional "map" for the first time. The astrophysicists now plan to optimise their simulation in order to improve their results and better match observational data. They also hope to clear up any remaining questions such as the pronounced asymmetry of the gas distribution in the central zone of the Milky Way. Further simulations, based on the temporal development of the chemical composition of the gas, are intended to unravel this mystery.

"We believe that these findings will have a major impact on future studies on the structure of our Galaxy," emphasises Prof. Klessen. The research results were published in the "Monthly Notices of the Royal Astronomical Society".