Astronomers Track the Birth of a 'Super-Earth'

A new model giving rise to young planetary systems offers a fresh solution to a puzzle that has vexed astronomers ever since new detection technologies and planet-hunting missions such as NASA's Kepler space telescope have revealed thousands of planets orbiting other stars: While the majority of these exoplanets fall into a category called super-Earths — bodies with a mass somewhere between Earth and Neptune — most of the features observed in nascent planetary systems were thought to require much more massive planets, rivaling or dwarfing Jupiter, the gas giant in our solar system.


In other words, the observed features of many planetary systems in their early stages of formation did not seem to match the type of exoplanets that make up the bulk of the planetary population in our galaxy.

This is an artist’s impression of a young star surrounded by a protoplanetary disk in which planets (not shown to scale) are forming. 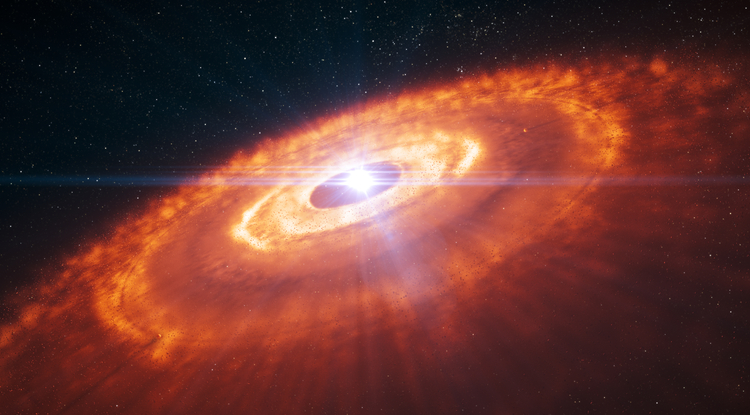 
"We propose a scenario that was previously deemed impossible: how a super-Earth can carve out multiple gaps in disks," says Ruobing Dong, the Bart J. Bok postdoctoral fellow at the University of Arizona's Steward Observatory and lead author on the study, soon to be published in the Astrophysical Journal. "For the first time, we can reconcile the mysterious disk features we observe and the population of planets most commonly found in our galaxy."

How exactly planets form is still an open question with a number of outstanding problems, according to Dong.

"Kepler has found thousands of planets, but those are all very old, orbiting around stars a few billion years old, like our sun," he explains. "You could say we are looking at the senior citizens of our galaxy, but we don't know how they were born."

To find answers, astronomers turn to the places where new planets are currently forming: protoplanetary disks — in a sense, baby sisters of our solar system.

The protoplanetary disk around HL Tau, a million-year-old sunlike star located approximately 450 light-years from Earth in the constellation of Taurus, dwarfs our solar system (right). Taken by the ALMA array, this image reveals a series of concentric and bright rings, separated by gaps — features astronomers have struggled to explain until now. 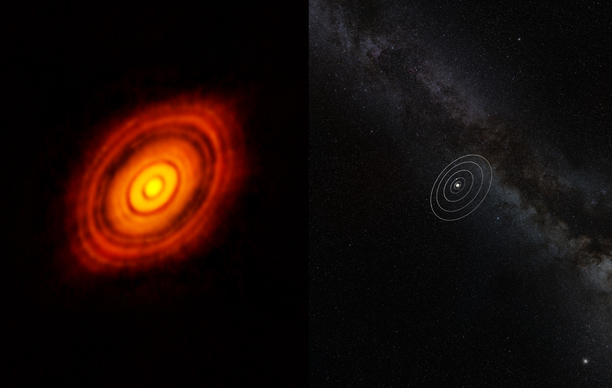 Such disks form when a vast cloud of interstellar gas and dust condenses under the effect of gravity before collapsing into a swirling disk. At the center of the protoplanetary disk shines a young star, only a few million years old. As microscopic dust particles coalesce to sand grains, and sand grains stick together to form pebbles, and pebbles pile up to become asteroids and ultimately planets, a planetary system much like our solar system is born.

In the most likely scenario, much of the disk's material gets accreted onto the star, some is blown away by stellar radiation and the rest goes into forming planets.

Although protoplanetary disks have been observed in relative proximity to the Earth, it is still extremely difficult to make out any planets that may be forming within. Rather, researchers have relied on features such as gaps and rings to infer the presence of planets.

"Among the explanations for these rings and gaps, those involving planets certainly are the most exciting and drawing the most attention," says co-author Shengtai Li, a research scientist at Los Alamos National Laboratory in Los Alamos, New Mexico. "As the planet orbits around the star, the argument goes, it may clear a path along its orbit, resulting in the gap we see."

Except that reality is a bit more complicated, as evidenced by two of the most prominent observations of protoplanetary disks, which were made with ALMA, the Atacama Large Millimeter/submillimeter Array in Chile. ALMA is an assembly of radio antennas between 7 and 12 meters in diameter and numbering 66 of them once completed. The images of HL Tau and TW Hydra, obtained in 2014 and 2016, respectively, have revealed the finest details so far in any protoplanetary disk, and they show some features that are difficult, if not impossible, to explain with current models of planetary formation, Dong says.

"Among the gaps in HL Tau and TW Hya revealed by ALMA, two pairs of them are extremely narrow and very close to each other," he explains. "In conventional theory, it is difficult for a planet to open such gaps in a disk. They can never be this narrow and this close to each other for reasons of the physics involved."

This image, generated by the computer model proposed in this study, simulates the evolution of a protoplanetary disk with one "super-Earth." It reveals similar features as the image of an actual disk such as HL Tau observed with ALMA. 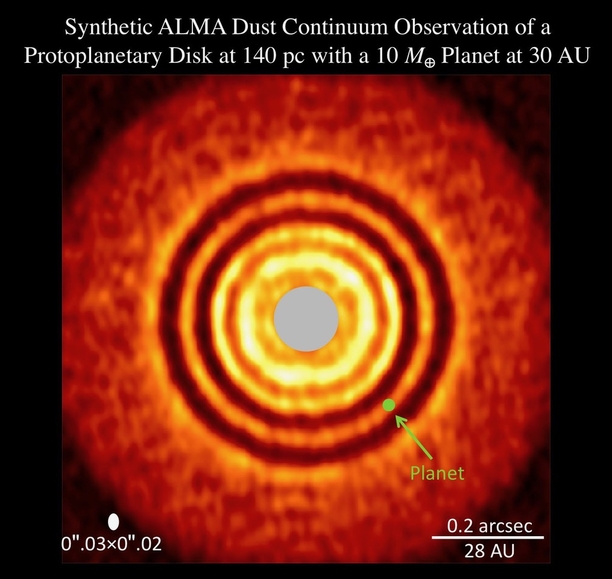 In the case of HL Tau and TW Hya, one would have to invoke two planets whose orbits hug each other very closely — a scenario that would not be stable over time and therefore is unlikely.

While previous models could explain large, single gaps believed to be indicative of planets clearing debris and dust in their path, they failed to account for the more intricate features revealed by the ALMA observations.

The model created by Dong and his co-authors results in what the team calls synthetic observations — simulations that look exactly like what ALMA would see on the sky. Dong's team accomplished this by tweaking the parameters going into the simulation of the evolving protoplanetary disk, such as assuming a low viscosity and adding the dust to the mix. Most previous simulations were based on higher disk viscosity and accounted only for the disk's gaseous component.

"The viscosity in protoplanetary disks may be driven by turbulence and other physical effects," Li says. "It's a somewhat mysterious quantity — we know it's there, but we don't know its origin or how large its value is, so we think our assumptions are reasonable, considering that they result in the pattern that has actually been observed on the sky."

Even more important, the synthetic observations emerged from the simulations without the necessity to invoke gas giants the size of Jupiter or larger.

"One super-Earth turned out to be sufficient to create the multiple rings and multiple, narrow gaps we see in the actual observations," Dong says.

This simulation of a lone super-Earth in a protoplanetary disk takes into account the effects of dust in addition to gas, resulting in a much more realistic picture. After 2,000 orbits, narrow gaps and multiple ring features emerge, just like those seen in actual observations such as the ones by ALMA.

As future research uncovers more of the inner workings of protoplanetary disks, Dong and his team will refine their simulations with new data. For now, their synthetic observations offer an intriguing scenario that provides a missing link between the features observed in many planetary infants and their grown-up counterparts.

The study, "Multiple Disk Gaps and Rings Generated by a Single Super-Earth," by Ruobing Dong, Shentai Li, Eugene Chiang and Hui Li, will be published on July 13 in the Astrophysical Journal.

Contacts and sources:
Daniel Stolte
University of Arizona
on July 11, 2017