Ancient mitochondrial DNA from the femur of a Neanderthal helps to resolve the complicated relationship between modern humans and Neanderthals. The genetic data recovered by the research team, led by scientists from the Max Planck Institute for the Science of Human History and the University of Tübingen, provides a timeline for a proposed hominin migration out of Africa by a lineage more closely related to modern humans.

These hominins interbred with Neanderthals already present in Europe, leaving their mark on the Neanderthals’ mitochondrial DNA. The study, published today in Nature Communications, pushes back the possible date of this event to between 470,000 and 220,000 years ago.

This femur of a Neanderthal provided evidence that ancestors may have included hominins from Africa who were closely related to modern humans. 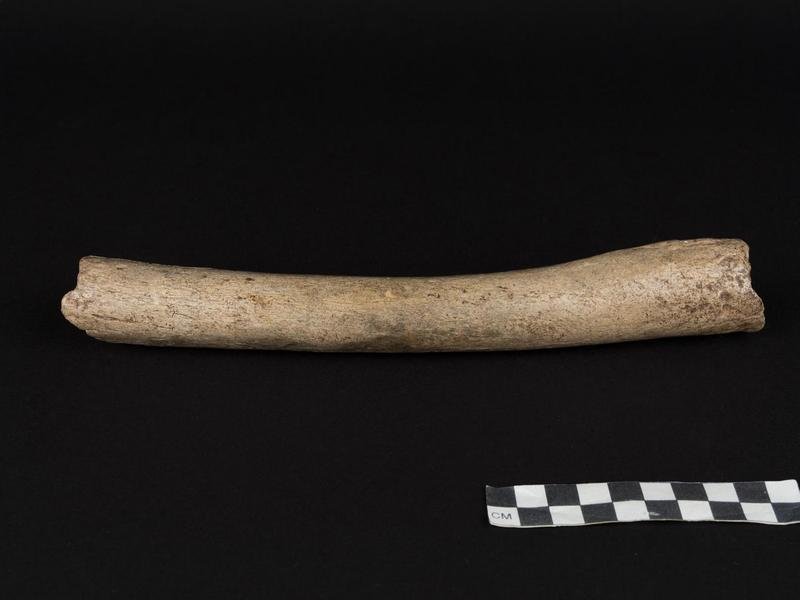 Mitochondria are the energy-producing machinery of our cells. These mitochondria have their own DNA, which is separate from our nuclear DNA. Mitochondria are inherited from mother to child and can thus be used to trace maternal lineages and population split times. In fact, changes in the mitochondrial DNA can be used to distinguish groups and also to estimate the amount of time that has passed since two individuals shared a common ancestor, as these mutations occur at predictable rates.

Prior research analyzing nuclear DNA from Neanderthals and modern humans estimated the split of the two groups at approximately 765,000 to 550,000 years ago. However, studies looking at mitochondrial DNA showed a much more recent split of around 400,000 years ago. Moreover, the mitochondrial DNA of Neanderthals is more similar to that of modern humans, and thus indicates a more recent common ancestor, than to that of their close nuclear relatives the Denisovans.

There has been debate about the cause of these discrepancies, and it has been proposed that a hominin migration out of Africa might have occurred prior to the major dispersal of modern humans. This human group, more closely related to modern humans than to Neanderthals, could have introduced their mitochondrial DNA to the Neanderthal population in Europe through genetic admixture, as well as contributing a small amount of nuclear DNA to Neanderthals but not to Denisovans.. However, more data was needed to evaluate the feasibility of this scenario and to define the temporal limits of the proposed event.

The femur of a Neanderthal excavated already in 1937 from the Hohlenstein-Stadel Cave close to Ulm provided just such an opportunity. “The bone, which shows evidence of being gnawed on by a large carnivore, provided mitochondrial genetic data that showed it belongs to the Neanderthal branch,” explains Cosimo Posth of the Max Planck Institute for the Science of Human History, lead author of the study. Traditional radiocarbon dating did not work to assess the age of the femur, which was instead estimated using the mutation rate as approximately 124,000 years old. This makes this Neanderthal specimen, designated HST by the researchers, among the oldest to have its mitochondrial DNA analyzed to date.

The proposed scenario is that after divergence of Neanderthals and modern humans (dated to a maximum of 470,000 years ago), but before the Neanderthals from Hohlenstein and the other Neanderthals diverged genetically (dated to a minimum of 220,000 years ago), a group of hominins moved from Africa to Europe, introducing their mitochondrial DNA to the Neanderthal population.
Thus this intermediate migration out of Africa would have occurred between 470,000 and 220,000 years ago. “Despite the large interval, these dates provide a temporal window for possible hominin connectivity and interaction across the two continents in the past,” says Posth.

"For a better assessment of the genomic relationships with Neanderthals, Denisovans and modern humans, nuclear data from the HST femur would be pivotal," Posth explains. It is extremely challenging, however, to retrieve nuclear DNA from the Neanderthal find from Hohlenstein due to poor preservation and high levels of modern human contamination. In any case, however, high quality nuclear genome data from more than one individual would be necessary to fully investigate this proposed wave of human migration out of Africa, and is an intriguing area for future study.