Algae Have Sex After All, and Ammonium Puts Them in the Mood

New research shows a species of diatom, a single-celled algae, thought to be asexual does reproduce sexually, and scientists learned it’s a common compound – ammonium – that puts the ubiquitous organism in the mood.

The findings, published in PLOS One, may be a key step toward greater understanding of the evolution of sexual behavior and also have important biotechnology implications.

“Our discoveries solve two persistent mysteries that have plagued diatom researchers,” said corresponding author Kimberly Halsey, a microbiologist at Oregon State University. “Yes, they have sex, and yes, we can make them do it.” 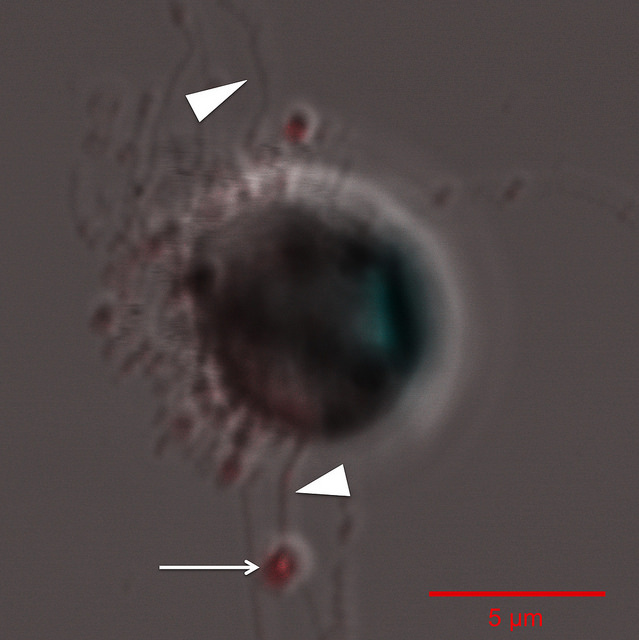 There are more than 200,000 species of diatoms, and the organisms are abundant nearly everywhere water is found, forming huge blooms in the spring and fall that help drive the marine carbon cycle.

“Diatoms are amazing; their silica frustules are beautiful and exquisite,” Halsey said. “Now that we can control their sexual pathway, that should open the door to being able to make crosses between different diatoms with different characteristics. We should be able to breed them just like we do with corn or rice or strawberries to select for traits that are really desirable.”

Halsey and collaborators in botany and statistics from OSU’s colleges of Science and Agricultural Sciences studied the “centric” Thalassiosira pseudonana species of diatom, a model organism for researchers; it’s one of two diatoms, the other being the “pennate” diatom Phaeodactulum tricornutum, to have had its genome sequenced.

“Everybody said Thalassiosira pseudonana was asexual, because they’d never seen anything else,” Halsey said. “The general thinking was that it just lost the ability or need to go through sex.”

Other scientists, Halsey notes, had showed T. pseudonana retained genes necessary for meiosis, a type of genetic replication specific to sexual reproduction, and concluded the diatom wasn’t using those genes.

“But we started seeing very different morphologies,” changes in cell structure, Halsey said, in this case related to sexual activity. “We also saw genes expressed that are involved in flagellar structures and assembly, which would only happen with sperm cells.”

Graduate student Eric Moore, lead author on the research, was astonished to learn “these single-celled organisms can differentiate into male and female cells, completely changing their morphologies.”

“In fact, I was convinced my cultures were contaminated before I realized what was actually going on,” he said.

Previous work by other researchers studying different types of centric diatoms showed that growth stress – interruptions of light, changes in salinity, shifts in nutrients – can sometimes, but not reliably, cause cells to become sexual.

But manual, microscopic analysis by Halsey’s team found that ammonium, a common compound that’s a metabolic waste product of animals, reliably caused two strains of T. pseudonana and two other centric diatoms to change their cell structures, making eggs and sperm; ammonium caused the diatoms to get ready for sex when at least one other cell growth factor – such as light, phosphorus or silica – was in short supply.

In addition, RNA sequencing showed more than 1,200 diatom genes that changed in activity when ammonium lit the algae’s sexual fires. Halsey suggests that in nature, the protists that graze on the diatom blooms excrete the ammonium that triggers the diatoms’ sexualization.

“The specific collection of environmental factors that make diatoms have sex aren’t yet known,” she said. “But identifying ammonium as a sexuality inducer potentially opens the door to new avenues of research into breeding and genetic modification to control important traits.”