Wind from the Desert Brings the Dust Storm Microbiome

Israel is subjected to sand and dust storms from several directions: northeast from the Sahara, northwest from Saudi Arabia and southwest from the desert regions of Syria. The airborne dust carried in these storms affects the health of people and ecosystems alike. New research at the Weizmann Institute of Science suggests that part of the effect might not be in the particles of dust but rather in bacteria that cling to them, traveling many kilometers in the air with the storms.

Some of these bacteria might be pathogenic - harmful to us or the environment - and a few of them also carry genes for antibiotic resistance. Others may induce ecosystem functions such as nitrogen fixation. Prof. Yinon Rudich and his research group, including postdoctoral fellow Dr. Daniela Gat and former research student Yinon Mazar, in Weizmann's Earth and Planetary Sciences Department investigated the genetics of the windborne bacteria arriving along with the dust. 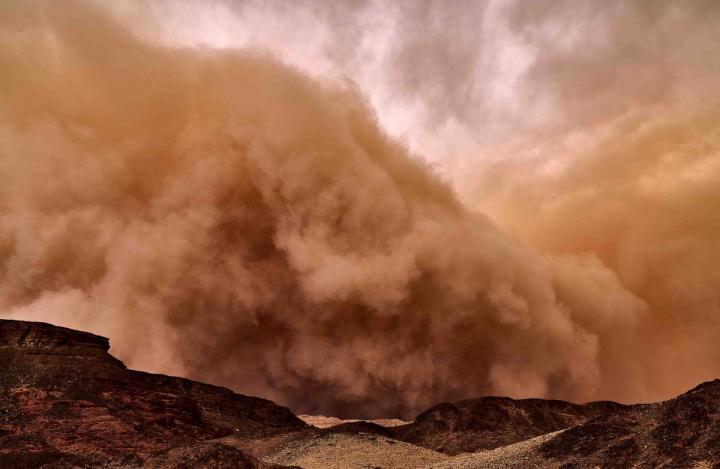 Credit: The Weizmann Institute of Science

"In essence, we investigated the microbiome of windborne dust," says Rudich. "The microbiome of a dust storm originating in the Sahara is different from one blowing in from the Saudi or Syrian deserts, and we can see the fit between the bacterial population and the environmental conditions existing in each area."

The researchers found that during a dust storm the concentration of bacteria and the number of bacterial species present in the atmosphere rise sharply, so people walking outdoors in these storms are exposed to many more bacteria than usual.

Rudich says that the study enabled the researchers to identify a "signature" for each source of bacteria based on the prevalence of antibiotic resistant genes, which revealed whether the genes were local or imported from distant deserts. "We found that as more 'mixing' occurs between local dust and that which comes from far off, the lower the contribution of the imported antibiotic resistance genes." In other words, antibiotic resistance coming from Africa or Saudi Arabia is still a very minor threat compared to that caused and spread by human activity, especially animal husbandry. Also participating in this research were Dr. Eddie Cytryn of the Volcani Center and Prof. Yigal Erel of the Hebrew University of Jerusalem.

City air not set to improve

Urban air pollution is attributed, to a large extent, to emissions from transportation. Prof. Rudich and Staff Scientist Dr. Michal Pardo-Levin ask how these sources contribute to air pollution. Their findings show that pollution that does not come from the combustion engine but rather is released from the friction of the vehicle's tires on the road and from braking systems can lead to serious health effects upon inhalation. That means that even if we manage to significantly reduce our cars' tailpipe emissions, city air will still be polluted, to a large extent, with these other substances. And since the friction of tires and brakes are necessary for driving, reducing their emissions could be much harder.


Contacts and sources:
The Weizmann Institute of Science
on June 28, 2017