Astronomers have released an image of a vast filament of star-forming gas, 1200 light-years away, in the stellar nursery of the Orion Nebula.

The image shows ammonia molecules within a 50-light-year long filament detected through radio observations made with the Robert C. Byrd Green Bank Telescope in West Virginia. That image is combined with an image of the Orion Nebula--an object familiar to amateur and professional astronomers alike--taken with NASA's Wide-field Infrared Survey Explore (WISE) telescope. 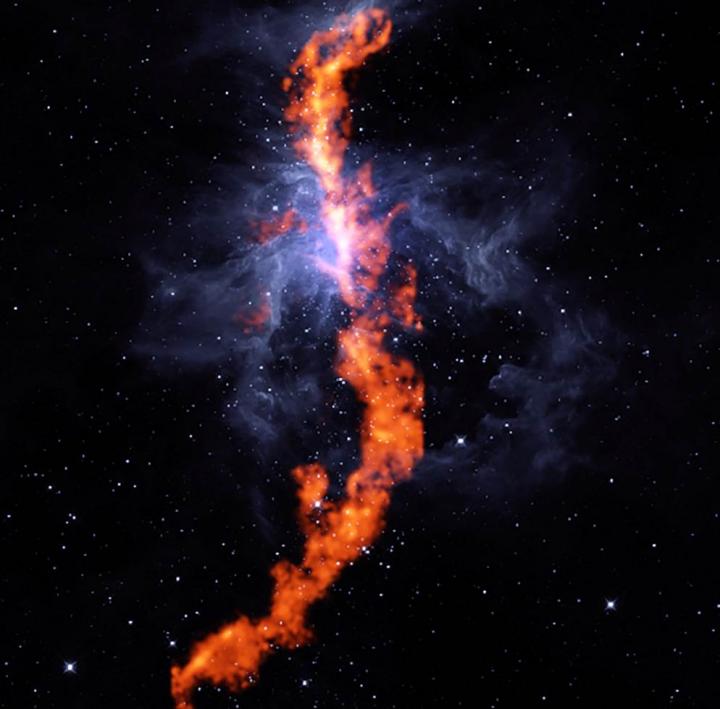 "We still don't understand in detail how large clouds of gas in our Galaxy collapse to form new stars," says Rachel Friesen, one of the collaboration's co-Principal Investigators and, until 31 May 2017, a Dunlap Fellow at the Dunlap Institute for Astronomy & Astrophysics, University of Toronto.

"But ammonia is an excellent tracer of dense, star-forming gas," says Friesen, "and these large ammonia maps will allow us to track the motions and temperature of the densest gas. This is critical to assessing whether gas clouds and filaments are stable, or are undergoing collapse on their way to forming new stars."

The goal of GAS is to survey all the major, nearby star-forming regions in the northern half of the Gould Belt -- a ring of young stars and gas clouds that circles the entire sky and runs through the constellation Orion. The survey will eventually provide a clearer picture over a larger portion of the sky of the temperatures and motions of gas within these dynamic stellar nurseries.

Notes:
1) The first GAS data release includes data from observations of four Gould Belt clouds: B18 in the constellation Taurus; NGC 1333 in Perseus; L1688 in Ophiuchus; and Orion A North in Orion.

2) The 100-metre Green Bank Telescope is located in the National Radio Quiet Zone, a 34 thousand square kilometre area in which radio transmissions are tightly restricted. The Green Bank Observatory (GBO) is a facility of the National Science Foundation operated under a cooperative agreement by Associated Universities, Inc.