An unknown, unseen "planetary mass object" may lurk in the outer reaches of our solar system, according to new research on the orbits of minor planets to be published in the Astronomical Journal. This object would be different from -- and much closer than -- the so-called Planet Nine, a planet whose existence yet awaits confirmation.

In the paper, Kat Volk and Renu Malhotra of the University of Arizona's Lunar and Planetary Laboratory, or LPL, present compelling evidence of a yet-to-be- discovered planetary body with a mass somewhere between that of Mars and Earth. The mysterious mass, the authors show, has given away its presence -- for now -- only by controlling the orbital planes of a population of space rocks known as Kuiper Belt objects, or KBOs, in the icy outskirts of the solar system.

A planetary mass object the size of Mars would be sufficient to produce the observed perturbations in the distant Kuiper Belt. 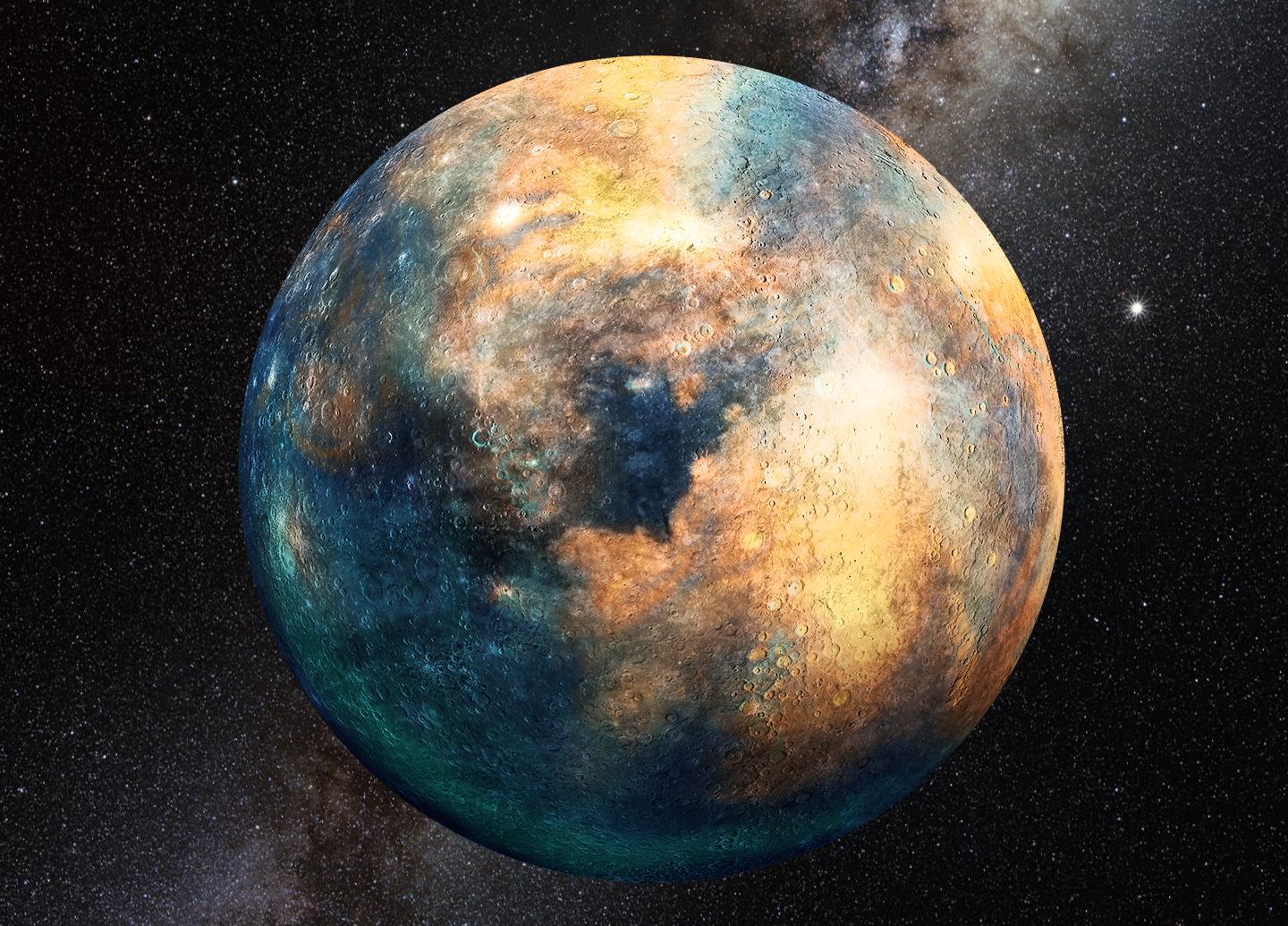 While most KBOs -- debris left over from the formation of the solar system -- orbit the sun with orbital tilts (inclinations) that average out to what planetary scientists call the invariable plane of the solar system, the most distant of the Kuiper Belt's objects do not. Their average plane, Volk and Malhotra discovered, is tilted away from the invariable plane by about eight degrees. In other words, something unknown is warping the average orbital plane of the outer solar system.

"The most likely explanation for our results is that there is some unseen mass," says Volk, a postdoctoral fellow at LPL and the lead author of the study. "According to our calculations, something as massive as Mars would be needed to cause the warp that we measured."

The Kuiper Belt lies beyond the orbit of Neptune and extends to a few hundred Astronomical Units, or AU, with one AU representing the distance between Earth and the sun. Like its inner solar system cousin, the asteroid belt between Mars and Jupiter, the Kuiper Belt hosts a vast number of minor planets, mostly small icy bodies (the precursors of comets), and a few dwarf planets.

For the study, Volk and Malhotra analyzed the tilt angles of the orbital planes of more than 600 objects in the Kuiper Belt in order to determine the common direction about which these orbital planes all precess. Precession refers to the slow change or "wobble" in the orientation of a rotating object.

KBOs operate in an analogous way to spinning tops, explains Malhotra, who is a Louise Foucar Marshall Science Research Professor and Regents' Professor of Planetary Sciences at LPL.

"Imagine you have lots and lots of fast-spinning tops, and you give each one a slight nudge," she says. "If you then take a snapshot of them, you will find that their spin axes will be at different orientations, but on average, they will be pointing to the local gravitational field of Earth.

A yet to be discovered, unseen 'planetary mass object' makes its existence known by ruffling the orbital plane of distant Kuiper Belt objects, according to research by Kat Volk and Renu Malhotra of the UA's Lunar and Planetary Laboratory. The object is pictured on a wide orbit far beyond Pluto in this artist's illustration. 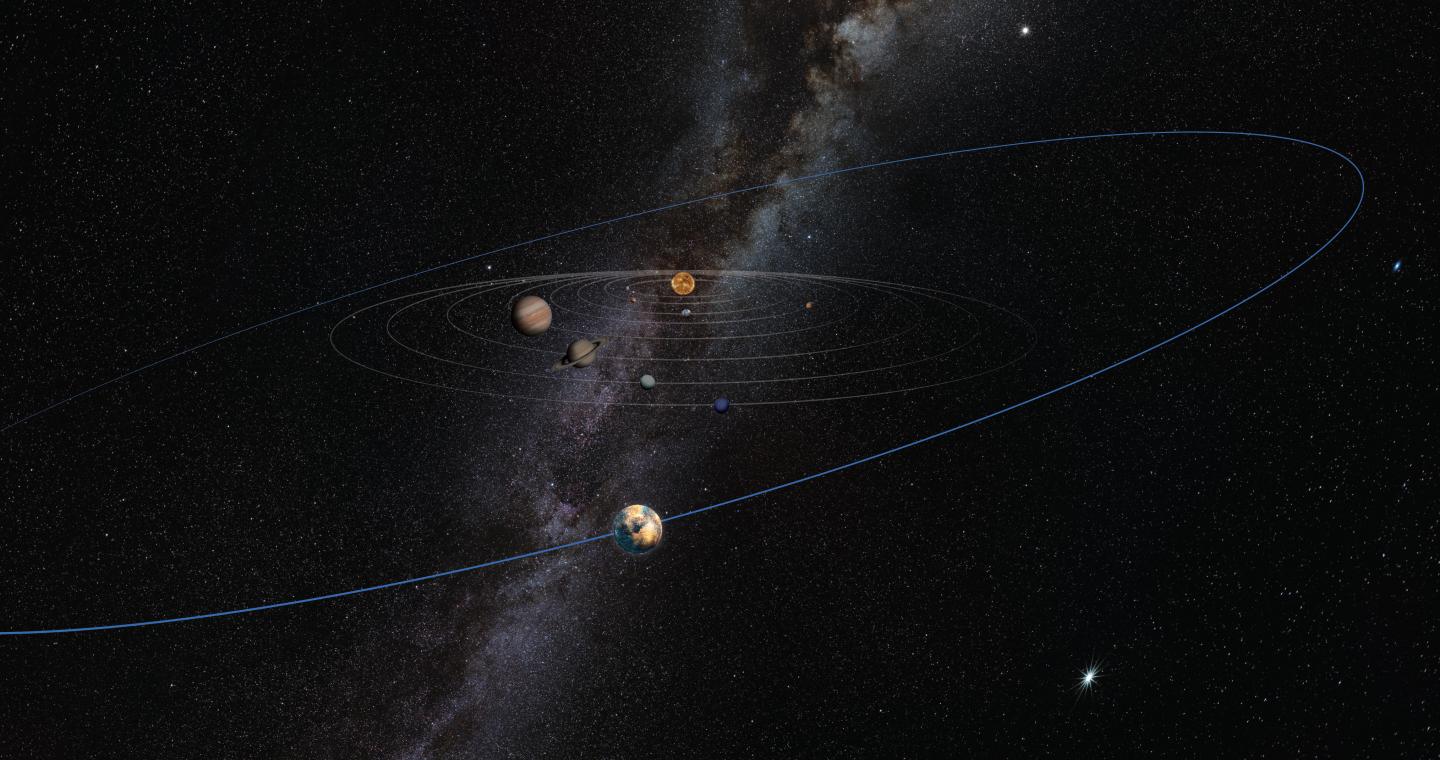 "We expect each of the KBOs' orbital tilt angle to be at a different orientation, but on average, they will be pointing perpendicular to the plane determined by the sun and the big planets."

If one were to think of the average orbital plane of objects in the outer solar system as a sheet, it should be quite flat past 50 AU, according to Volk.

"But going further out from 50 to 80 AU, we found that the average plane actually warps away from the invariable plane," she explains. "There is a range of uncertainties for the measured warp, but there is not more than 1 or 2 percent chance that this warp is merely a statistical fluke of the limited observational sample of KBOs."

In other words, the effect is most likely a real signal rather than a statistical fluke. According to the calculations, an object with the mass of Mars orbiting roughly 60 AU from the sun on an orbit tilted by about eight degrees (to the average plane of the known planets) has sufficient gravitational influence to warp the orbital plane of the distant KBOs within about 10 AU to either side.

"The observed distant KBOs are concentrated in a ring about 30 AU wide and would feel the gravity of such a planetary mass object over time," Volk said, "so hypothesizing one planetary mass to cause the observed warp is not unreasonable across that distance."

This rules out the possibility that the postulated object in this case could be the hypothetical Planet Nine, whose existence has been suggested based on other observations. That planet is predicted to be much more massive (about 10 Earth masses) and much farther out at 500 to 700 AU.

"That is too far away to influence these KBOs," Volk said. "It certainly has to be much closer than 100 AU to substantially affect the KBOs in that range."

So why haven't we found it yet? Most likely, according to Malhotra and Volk, because we haven't yet searched the entire sky for distant solar system objects. The most likely place a planetary mass object could be hiding would be in the galactic plane, an area so densely packed with stars that solar system surveys tend to avoid it.

"The chance that we have not found such an object of the right brightness and distance simply because of the limitations of the surveys is estimated to be to about 30 percent," Volk said.

A possible alternative to an unseen object that could have ruffled the plane of outer Kuiper Belt objects could be a star that buzzed the solar system in recent (by astronomical standards) history, the authors said.

"A passing star would draw all the 'spinning tops' in one direction," Malhotra said. "Once the star is gone, all the KBOs will go back to precessing around their previous plane. That would have required an extremely close passage at about 100 AU, and the warp would be erased within 10 million years, so we don't consider this a likely scenario."

Humankind's chance to catch a glimpse of the mysterious object might come fairly soon once construction of the Large Synoptic Survey Telescope is completed. Run by a consortium that includes the UA and scheduled for first light in 2020, the instrument will take unprecedented, real-time surveys of the sky, night after night.

"We expect LSST to bring the number of observed KBOs from currently about 2000 to 40,000," Malhotra said. "There are a lot more KBOs out there -- we just have not seen them yet. Some of them are too far and dim even for LSST to spot, but because the telescope will cover the sky much more comprehensively than current surveys, it should be able to detect this object, if it's out there."