The desalination system, which uses a combination of membrane distillation technology and light-harvesting nanophotonics, is the first major innovation from the Center for Nanotechnology Enabled Water Treatment (NEWT), a multi-institutional engineering research center based at Rice University.

NEWT's "nanophotonics-enabled solar membrane distillation" technology, or NESMD, combines tried-and-true water treatment methods with cutting-edge nanotechnology that converts sunlight to heat. The technology is described online this week in the Proceedings of the National Academy of Sciences.

In conventional membrane distillation (top), hot saltwater is flowed across one side of a porous membrane and cold freshwater is flowed across the other. Water vapor is naturally drawn through the membrane from the hot to the cold side. In NEWT's "nanotechnology-enabled solar membrane distillation," or NESMD (bottom), a porous layer of sunlight-activated carbon black nanoparticles acts as the heating element for the process. 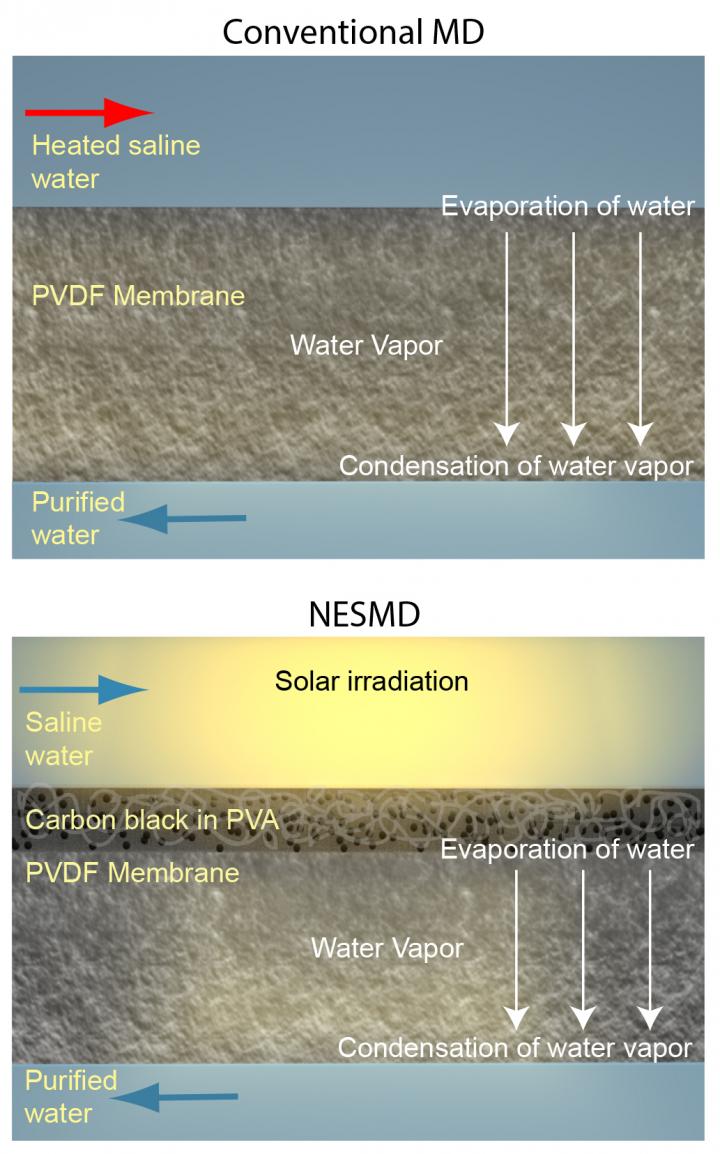 More than 18,000 desalination plants operate in 150 countries, but NEWT's desalination technology is unlike any other used today.

"Direct solar desalination could be a game changer for some of the estimated 1 billion people who lack access to clean drinking water," said Rice scientist and water treatment expert Qilin Li, a corresponding author on the study. "This off-grid technology is capable of providing sufficient clean water for family use in a compact footprint, and it can be scaled up to provide water for larger communities."

The oldest method for making freshwater from salt water is distillation. Salt water is boiled, and the steam is captured and run through a condensing coil. Distillation has been used for centuries, but it requires complex infrastructure and is energy inefficient due to the amount of heat required to boil water and produce steam. More than half the cost of operating a water distillation plant is for energy.

An emerging technology for desalination is membrane distillation, where hot salt water is flowed across one side of a porous membrane and cold freshwater is flowed across the other. Water vapor is naturally drawn through the membrane from the hot to the cold side, and because the seawater need not be boiled, the energy requirements are less than they would be for traditional distillation. However, the energy costs are still significant because heat is continuously lost from the hot side of the membrane to the cold.

"Unlike traditional membrane distillation, NESMD benefits from increasing efficiency with scale," said Rice's Naomi Halas, a corresponding author on the paper and the leader of NEWT's nanophotonics research efforts. "It requires minimal pumping energy for optimal distillate conversion, and there are a number of ways we can further optimize the technology to make it more productive and efficient."

NEWT's new technology builds upon research in Halas' lab to create engineered nanoparticles that harvest as much as 80 percent of sunlight to generate steam. By adding low-cost, commercially available nanoparticles to a porous membrane, NEWT has essentially turned the membrane itself into a one-sided heating element that alone heats the water to drive membrane distillation.

In the PNAS study, researchers offered proof-of-concept results based on tests with an NESMD chamber about the size of three postage stamps and just a few millimeters thick. The distillation membrane in the chamber contained a specially designed top layer of carbon black nanoparticles infused into a porous polymer. The light-capturing nanoparticles heated the entire surface of the membrane when exposed to sunlight. A thin half-millimeter-thick layer of salt water flowed atop the carbon-black layer, and a cool freshwater stream flowed below.

This scaled-up test bed of NEWT's direct solar desalination technology uses carbon black nanoparticles that convert as much as 80 percent of sunlight energy into heat. Results from an earlier prototype showed the technology could produce as much as six liters of freshwater per hour per square meter of solar membrane. 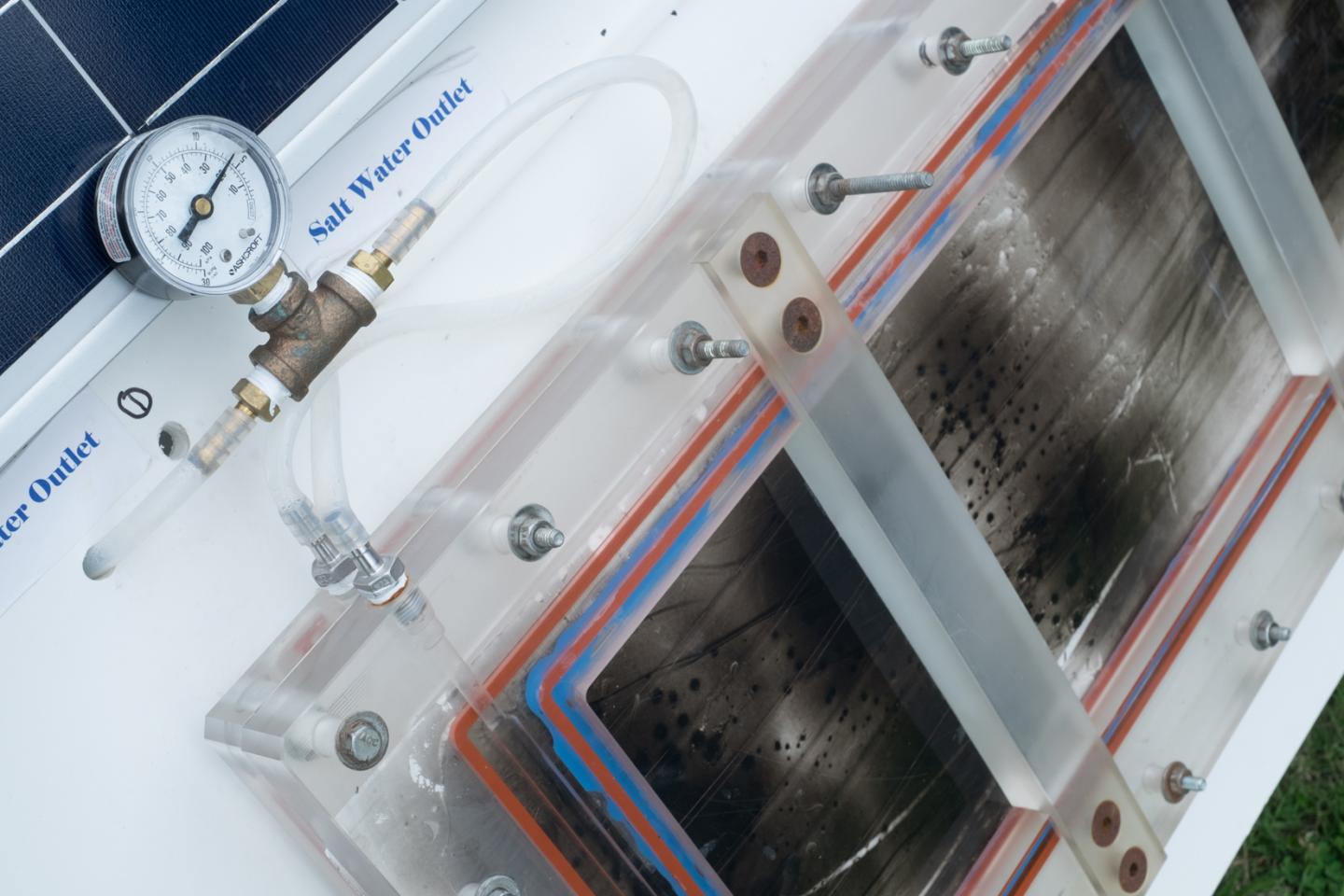 Credit: Jeff Fitlow/Rice University
Li, the leader of NEWT's advanced treatment test beds at Rice, said the water production rate increased greatly by concentrating the sunlight. "The intensity got up 17.5 kilowatts per meter squared when a lens was used to concentrate sunlight by 25 times, and the water production increased to about 6 liters per meter squared per hour."

Li said NEWT's research team has already made a much larger system that contains a panel that is about 70 centimeters by 25 centimeters. Ultimately, she said, NEWT hopes to produce a modular system where users could order as many panels as they needed based on their daily water demands.

Established by the National Science Foundation in 2015, NEWT aims to develop compact, mobile, off-grid water-treatment systems that can provide clean water to millions of people who lack it and make U.S. energy production more sustainable and cost-effective. NEWT, which is expected to leverage more than $40 million in federal and industrial support over the next decade, is the first NSF Engineering Research Center (ERC) in Houston and only the third in Texas since NSF began the ERC program in 1985. NEWT focuses on applications for humanitarian emergency response, rural water systems and wastewater treatment and reuse at remote sites, including both onshore and offshore drilling platforms for oil and gas exploration.