Cancer immunotherapy has emerged as one of the most exciting directions in cancer treatment. But the approach only works in a fraction of patients and can cause nasty side effects.

Now, in the journal ACS Nano, scientists report the development of the first dual-cell targeting immunotherapy nanoparticle that slows tumor growth in mice with different cancers. In their study, up to half the mice in one cancer group went into full remission after the treatment.

Immunotherapy works by giving the body’s own immune system a boost in its fight against disease. In cancer patients, there are two main lines of immunotherapy: One disables cancer cells’ ability to hide from the immune system, and the other recruits the body’s T cells to destroy tumors. Jonathan P. Schneck and colleagues wanted to see if they could combine these two tactics with one nanoparticle-based platform.

A two-in-one approach to immunotherapy involves both blocking cancer cells’ (red) ability to hide and prompting T cells (gray) to attack them. 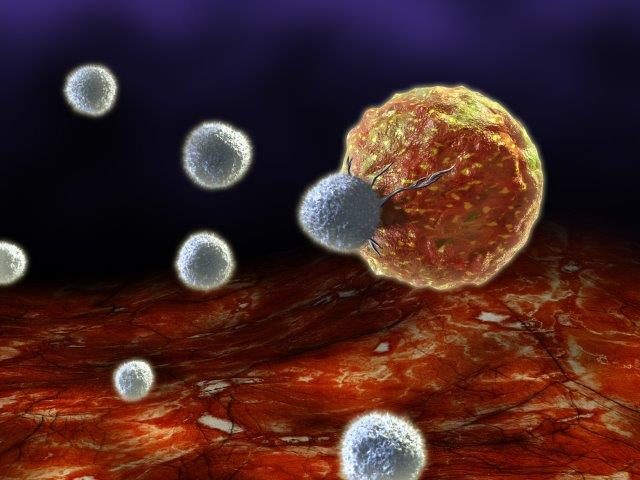 To incorporate these two functions into one system, the researchers developed “immunoswitch” nanoparticles. They’re designed to simultaneously turn off a pathway on tumor cells that would otherwise be used to become invisible to the immune system, and turn on a specific T cell process that launches them into action against cancer cells.

Testing on mouse models of melanoma and colon cancer showed that animals injected with the nanoparticles lived longer than those that did not receive the nanoparticles, and their tumor growth was delayed or even reversed in some cases. That the nanoparticles were effective against two different cancers suggests that they could help treat a variety of tumor types.

Further analysis found that the platform created a synergistic effect, which researchers say allowed them to use low treatment concentrations to potentially reduce the severe side effects that dual immunotherapy is known for.