Losing the War Against Rats

City rats are among the most important but least-studied wildlife in urban environments. Researchers argue they need greater access to urban properties if they are to win the war against rats.

People around the world denounce rats for fouling foods, spreading disease, starting fires, and even disabling motor vehicles. One might assume because of the threat city rats pose to health and safety, scientists would be hot on their tails--tracking every movement, monitoring each disease they carry, and discovering new tools to control their populations and movements.

But that's wrong. According to a new article published in the Journal of Urban Ecology, a team of researchers and pest management professionals in the US and Australia have identified why scientists are losing the international war against rats and what needs to change in order to empower scientists to keep pace.

A mother rat (behind) and two pups (in front) emerge from a storm drain basin in NYC. The mother rat is taking her young to feast on nearby garbage bags filled and left sitting overnight prior to sanitation removal the next day. 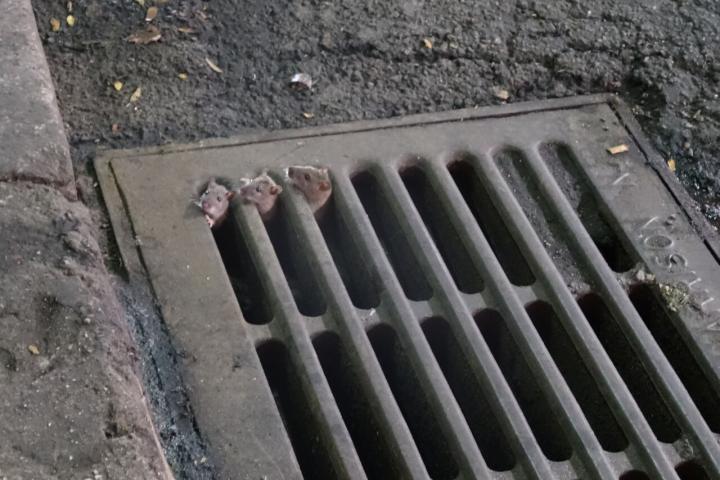 Rats are actually the least studied wildlife in the city, according to the article. Despite the current rates of human urbanization and climate change, scientists face near prohibitive difficulty studying the animals.

The authors suggest that rats are among nature's most perfectly adapted organisms. They closely shadow human settlements, but do so without being directly threatened--or seen--by humans. Consequently, these animals are also difficult to control or research.

The authors suggest that if researchers had greater access to private residences or businesses that would allow them to stow expensive scientific equipment and monitor rats in private, they might see improvements in pathogen surveillance, better understand population distribution, and importantly, test several novel control methods being developed by the team.

"They are the bane of urban environments, associated with poverty, disease, and fines by public health authorities" said Jason Munshi-South, co-author of the paper and associate professor of biology at Fordham University. "Business owners plagued with rats are reluctant to tell anyone, or to share their residences with researchers".

One successful method the team has employed is providing free, confidential, extermination services to willing residences who will allow their rats to be studied before exterminated. However, it is a challenge getting this message out to owners. In order to spread the message, Michael H. Parsons, lead author of the paper and a visiting research scholar at Fordham University is also offering up to a $1,000 USD reward for information leading to a viable research site in Manhattan.

"We neglect to study them at our own peril", added Parsons. "No war has ever decimated 1/3 of the human population. Rats have."

The paper "Trends in urban rat ecology: A framework to define the prevailing knowledge gaps and incentives for academia, pest management professionals (PMPs) and public health agencies to participate" is available at: https://academic.oup.com/Journal-of-Urban-Ecology/article-lookup/doi/10.1093/jue/jux005
on June 20, 2017