For Some US Counties, Climate Change Will Be Particularly Costly

A highly granular assessment of the impacts of climate change on the U.S. economy suggests that each 1°Celsius increase in temperature will cost 1.2% of the country's gross domestic product, on average.

Different from past analyses of climate change in the U.S., which suggested the country would benefit or lose as a single entity, this study captures regional differences: locations in the south, for example, are at much higher risk of incurring economic damage, while areas in the Pacific Northwest and New England may experience a slight economic gain.

County-level annual damages in median scenario for climate during 2080-2099 under business-as-usual emissions trajectory (RCP8.5). Negative damages indicate economic benefits. Map corresponds with Figure 2I in main article. This material relates to a paper that appeared in the June 30, 2017, issue of Science, published by AAAS. The paper, by S. Hsiang at University of California, Berkeley in Berkeley, Calif., and colleagues was titled, 'Estimating economic damage from climate change in the United States.' 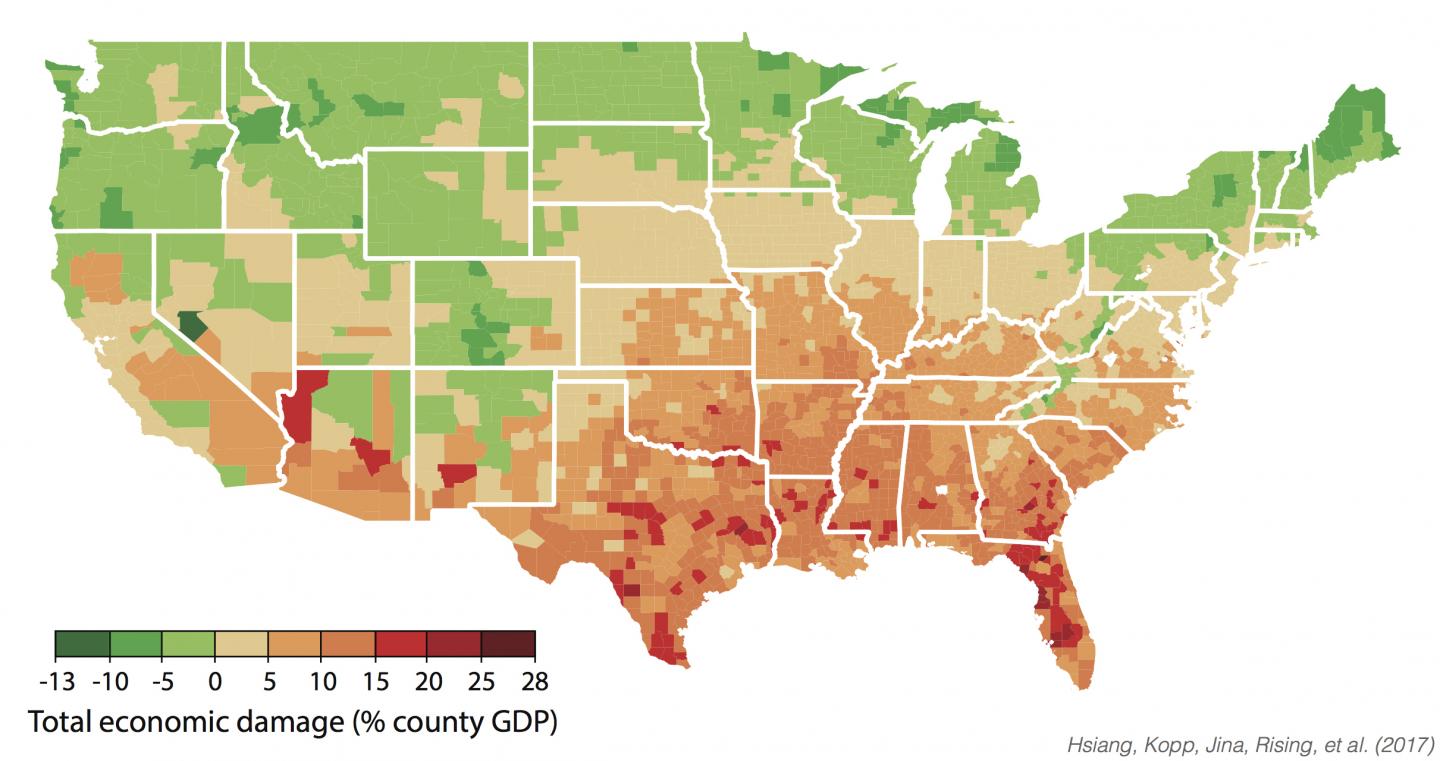 Because losses are expected to be largest in regions that are already poorer, on average, climate change will tend to increase preexisting inequality in the United States, the authors say. Estimates of climate change damage are central to the design of climate policies.

To better quantify the costs of climate change in the U.S., and at higher-resolution than in past, Solomon Hsiang and colleagues developed a model that integrated data capturing the effects of short-term weather fluctuations between 1981 and 2010 on six key economic factors, such as agriculture yield and labor supply. They used these data to construct estimates of future economic impacts based on climate change projections under a "business-as-usual" approach (one in which fossil fuels continue to be used intensively). Unsurprisingly, Atlantic coast counties are expected to suffer the largest losses from cyclone intensification and sea level rise, they report.


Inequality of damages in the USA: Range of economic damages per year for groupings of US counties, based on their income (29,000 simulations for each of 3,143 counties). The poorest 10% of counties are the leftmost box plot. The richest 10% are the rightmost box plot. Damages are fraction of county income. White lines are median estimates, boxes show the inner 66% of possible outcomes, outer whiskers are inner 90% of possible outcomes. This figure is a simplified version of Figure 5C in the main article. Overall though, southern and midwestern populations are projected to suffer the largest losses, exceeding 20% of gross county product (GCP) in some instances, while some northern and western populations may actually see small economic gains - up to 10% of GCP. The model estimates that average yields in agriculture will decline by about 9%.

As well, mortality rates will increase by about 5.4 deaths per 100,000, for each 1°C increase. In a related video interview, Hsiang highlights some of the policy-oriented implications of this work: "We've shown which U.S. regional economies are particularly vulnerable, which will help policymakers... If we are going to adapt, we need to know where to focus."

These results are highlighted in a Perspective by William A. Pizer. Reporters can find the economic damages projected for their county by visiting this site http://globalpolicy.science/econ-damage-climate-change-usa

Explore the ways in which climate change will impact where you live, work and do business. Starting with changes in temperature, this map will expand to include projected social and economic impacts in the weeks and months ahead.

The map shows changes from the norm in temperature in the U.S. at the end of the century. 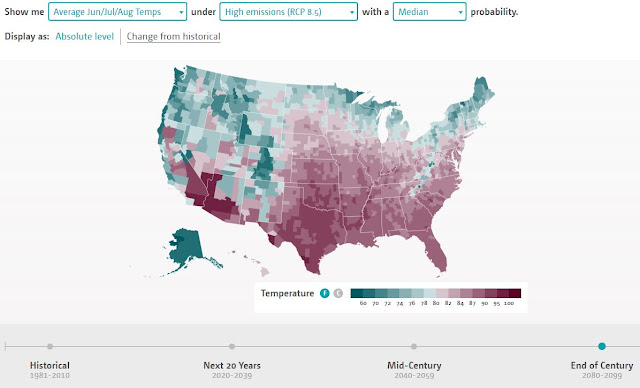 Contacts and sources:
American Association For The Advancement Of Science