Chimpanzees and Humans Console Victims of Aggression in Similar Ways

As it does in chimpanzees, social closeness motivates humans to console their peers after an act of aggression, according to a new study published in the open-access journal PLOS ONE.

The study, co-written by University of Alabama at Birmingham associate professor Peter Verbeek, Ph.D., found that consolation in the aftermath of robberies resembles post-aggression consolation in chimpanzees. Only a few species had been scientifically documented consoling victims of aggression: human children, chimpanzees, bonobos and gorillas. The new study is the first to observe consolation in adult humans. 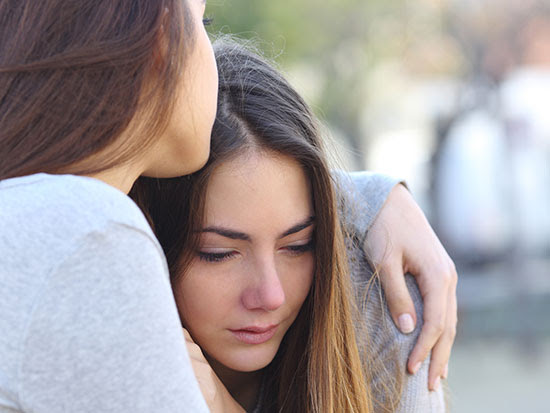 “Our study provides new evidence suggesting that significant aspects of our prosocial behavior may have evolutionary roots,” Verbeek said. “The patterns of post-aggression consolation we observed in adult humans resemble those observed in our close evolutionary cousin the chimpanzee. This knowledge is important for our society because it helps correct the erroneous impression that we may have of ourselves, as being aggressive by nature and peaceful by culture.”

Researchers analyzed real-life closed-circuit television footage of 249 individuals who were present in the immediate aftermath of 22 nonfatal commercial robberies in the Netherlands between 2014 and 2015. They examined whether social closeness, like age similarity or being employees of the same business, and gender of the victim and the bystander affected the likelihood of physical consolation behavior, such as a touch on the arm or a hug.

The group found that social closeness, rather than physical proximity, was important in determining whether a bystander would console a victim, which is consistent with the theory that bystanders console victims when they empathize with them. While females were more likely to console a victim, both male and female victims were equally likely to be consoled. When weapons were involved, or the robbers forcefully threatened victims, the likelihood that a bystander would console the victim increased dramatically. The study also found that a co-worker was much more likely to console a victim than was a stranger.

“Our work and that of our colleagues in the emerging behavioral science of peace studies shows that both our peaceful and aggressive behaviors have natural roots,” Verbeek said. “This knowledge can help motivate parents and teachers to cultivate in children and young people the natural ability for empathy-based prosocial behavior that is present in all of us.”

The authors emphasize that comparative research across different species can provide insight into the mental lives of animals, and should have implications for practices in behavioral science and animal research. Verbeek has conducted observational research on post-aggression consolation in nonhuman primates and in preschool children, and teaches in the new UAB Anthropology of Peace and Human Rights program in the UAB College of Arts and Science Department of Anthropology.