Late in the afternoon on a hot March day in central Mexico, a paleontologist uncovered a jaw bone and called over to Jack Tseng.

Tseng, PhD, assistant professor in the Department of Pathology and Anatomical Sciences in the Jacobs School of Medicine and Biomedical Sciences at the University at Buffalo, was on the dig researching intercontinental immigration of fossil mammals.

"I thought it was a badger," Tseng said, "but a colleague on the site had just finished a study of otters, and he said it was sea otter-like. But what would a sea otter be doing in central Mexico? Turns out the otter, from about 6 million years ago, may have been part of an immigration event from Florida to California. Based on the discovery, Tseng and his colleagues have written a paper to be published June 13 in the journal Biology Letters. They propose a new east-west passage for the otter, and potentially other mammals, along the northern edge of the Trans-Mexican Volcanic Belt, which runs across the country at the latitude of Mexico City.

"This is an entirely new idea that no one else has proposed," Tseng said. "We think it's very likely other animals utilized this route."

Like many breakthroughs, this one came from a fortunate tiny detail. The jawbone held several teeth.

"One tooth was a lower first molar, the most diagnostic tooth in a carnivore," Tseng said. "If we are lucky enough to find a fossil molar tooth that is complete, there is a lot of useful information."

The tooth was almost identical to a tooth from another Enhydritherium terraenovae (an ancient sea otter) fossil found in Florida. Similar finds had only been made along the coasts, in Florida and California, but paleontologists did not know how the animals got across the continent. One hypothesis was that they moved up and around through northern Canada, an 8,000 kilometer trip. Another was they made it down to Panama and crossed over to the west. 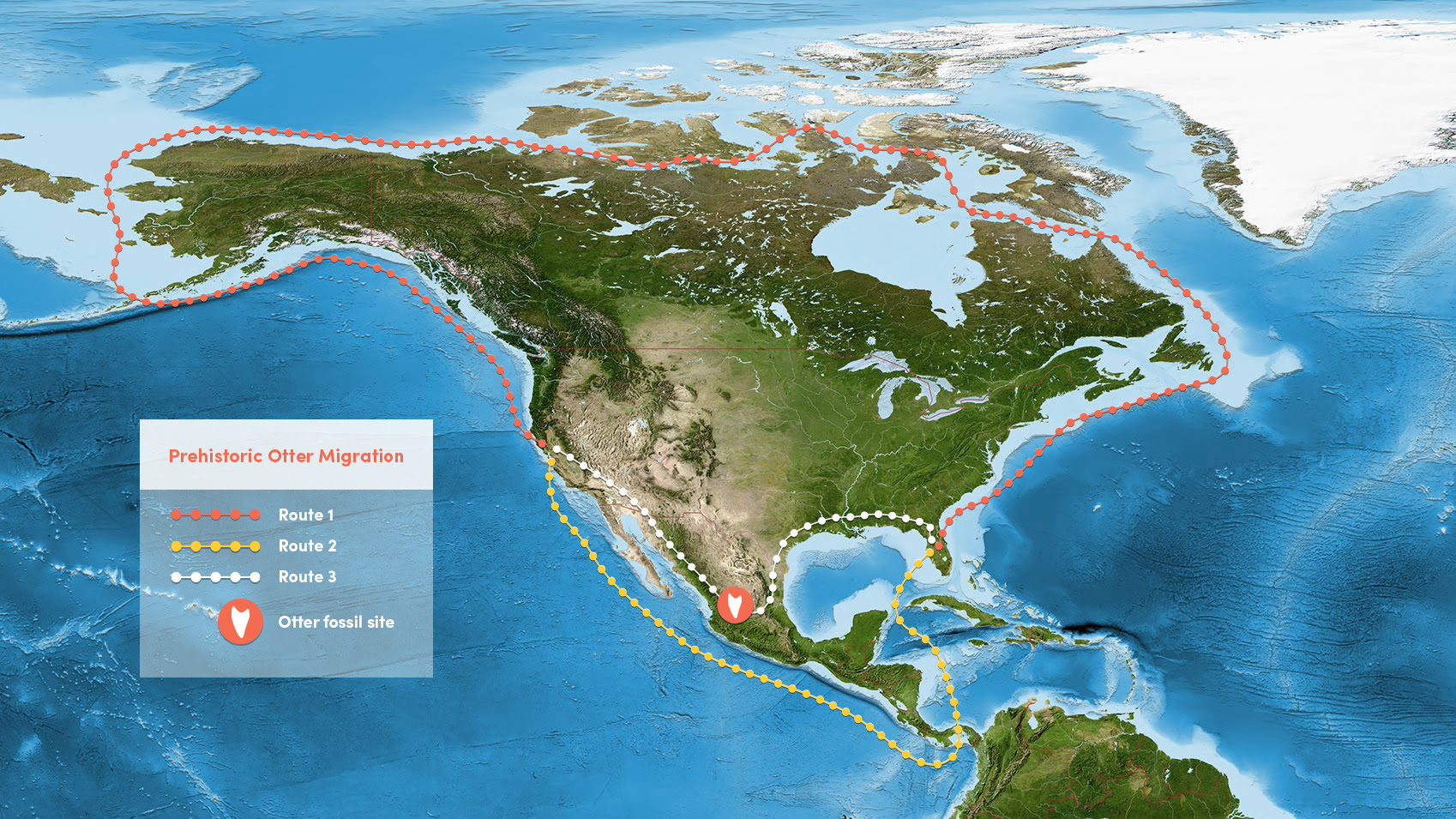 The possibility of an east-west migratory route in Mexico in the Miocene geologic epoch (roughly 23 million to 5.3 million years ago) has implications for a much larger biologic event -- the Great American Biotic Interchange, when land bridges were formed and animals dispersed to and from North America and South America. It shows that the region's fossil sites could have recorded details of this biological interchange of historic proportions.

But why don't we know more about this already?

"Compared to the U.S., Mexico is a blank slate in terms of paleontology," Tseng said. The region is difficult to work in because of the topography and flora, like cactus. So not many long-term field projects exist there.

"This is the beginning of the study," Tseng said. "Now that we have this evidence of these animals moving through Mexico, we can now look for evidence of other animals doing the same."

Adolfo Pacheco-Castro, a PhD student at the Universidad Nacional Autonoma de Mexico, Centro de Geociencias, and an author of the study, found the jawbone at the dig site in the Juchipila Basin, about 535 miles southeast of Laredo, Texas. The bone was taken to the university in Mexico, cleaned off and studied.

A rendering of the skull of the ancient otter whose remains were found in Mexico. 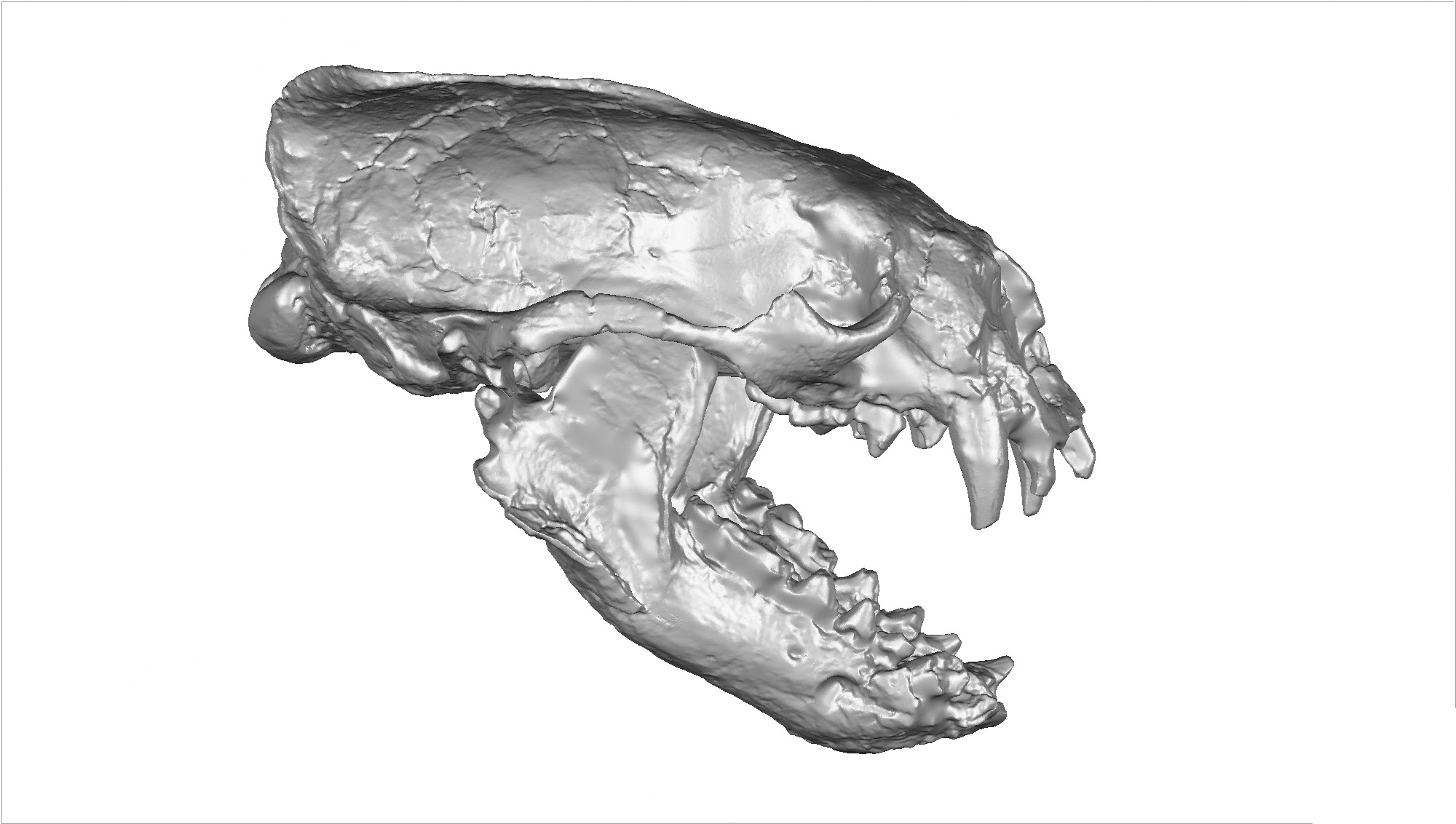 "We compared it to the original tooth from Florida, based on the cusps and the size, it couldn't be anything else," Tseng said. The fossils in Florida are older than those in California, so researchers speculate that immigrations went east to west.

But why did they travel at all?

"Animals tend to expand their range when and where there is opportunity," Tseng said. "As in when there is a geographic connection to suitable habitats. So as populations expand their range, they can move across a continent, or even between continents."

The Miocene-Pliocene transitional period was a time of disturbance, Tseng said. The plains of America would have been like Africa, with many large mammals. But the first ice age was approaching.

The fossil site in the Juchipila Basin in Mexico. 
Many large mammals perished in the ice age from environmental and anthropogenic causes, but relatives of the smaller Enhydritherium -- about the size of a small to medium dog -- survived into modern times and still live around central Mexico today.

Tseng said he expects some people will not agree with the new interpretation of an east-west corridor through Mexico for other mammals. But more research may confirm it.

"We are aware it is a single discovery," he said. "It essentially opens up a can of worms. We are throwing a different factor in. We now have a connection between Florida and California, and it's not in a straight line."